The Rams failed to complete a late-game comeback against the Hawks, but Fordham fans emerged victorious 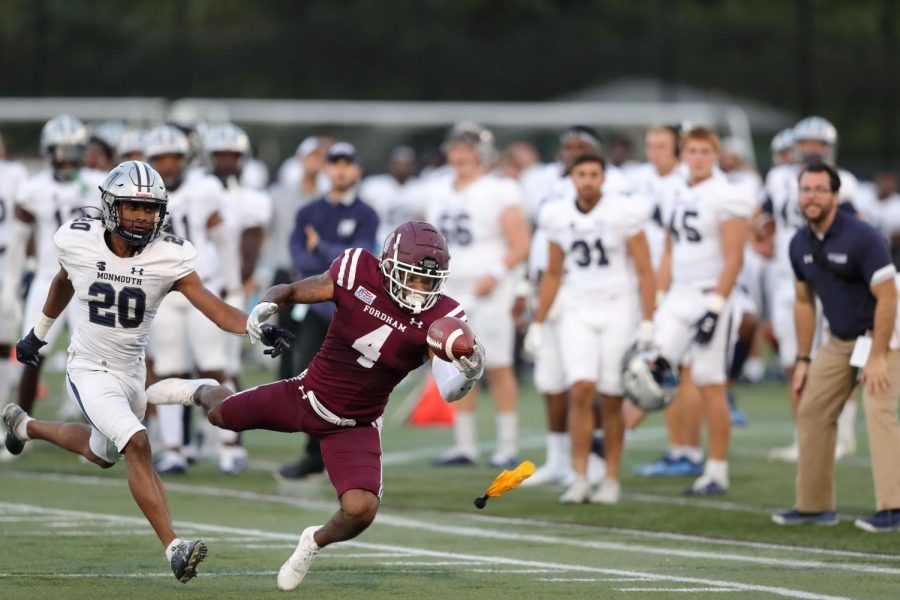 The Fordham football team fell to the Monmouth University Hawks 26-23 on Saturday, Sept. 11, in Fordham’s first game with a stadium of fans at their home field since 2019. The Rams attempted to launch a late-game comeback, but the reigning Big South Conference champions outlasted Fordham for their first victory of the 2021 season.

The night, officially titled Salute to Heroes Night, began with a brief ceremony honoring first responders and in remembrance of all lives lost on Sept. 11, 2001, followed by an emotional rendition of the national anthem sung by NYPD officer Tyler Abelson in front of the NYPD Color Guard.

The game itself started slowly, with both squads failing to score on their first two drives. After a scoreless first quarter, Monmouth capitalized on a Fordham fumble, driving down the field to score the game’s first touchdown with 12:28 left in the second.

The Rams responded swiftly. On the team’s next drive, Fordham marched down to Monmouth’s 10-yard line and answered with a field goal by Nick Leinenweber, Fordham College at Rose Hill (FCRH) ’22.

Still trailing behind, Fordham successfully captured momentum from the three-point drive and the combined efforts from Ryan Greenhagen, Gabelli School of Business at Rose Hill (GSBRH) ’22, and Elisha Armstrong, FCRH ’23, ended Monmouth’s fourth down bid by stuffing the line of scrimmage on the Hawks’ rushing attempt.

Quarterback Tim DeMorat, FCRH ’22, led the Fordham offense down the field following the stop. A 35-yard one-handed catch by Dequece Carter, GSBRH ’22, sparked the offense and the drive concluded with a seamless connection in the endzone between DeMorat and Carter, securing the Rams’ only lead for the entirety of the game.
This turnover gave Monmouth an advantageous field position and led to another Hawks touchdown at the 11:39 mark of the third.
The Hawks secured another touchdown before the end of the half to bring the score to 14-10 by the halftime break.

DeMorat fumbled at the conclusion of a rush on Fordham’s first drive of the third quarter. This turnover gave Monmouth an advantageous field position and led to another Hawks touchdown at the 11:39 mark of the third.

Monmouth consumed much of the clock with their lengthy, run-heavy drive, leaving only 26 seconds left as Fordham took the field for its final possession. Starting at their own eight-yard line, the Rams marched down the turf until they found themselves on their own 44-yard line with less than 10 seconds on the clock.

DeMorat heaved the ball downfield, successfully reaching the endzone in a last ditch attempt to win the game. The ball was tipped and hit the gloves of M.J. Wright, GSBRH ’23, but ultimately fell harmlessly into the endzone, ensuring Monmouth’s 26-23 victory.
While the game may have been disappointing, it also represented a slight return to normalcy for Fordham players and fans alike.
The contest marked Fordham’s second loss in as many games, but represented a noticeable step in the right direction in terms of competitiveness. DeMorat finished the game with 352 yards and three touchdowns and Carter finished with five receptions for 92 yards and two touchdowns. Defensively, the omnipresent Greenhagen finished with a stunning 28 tackles, following up his 30-tackle effort against Nebraska in another extremely productive game.

While the game will go down as a loss in the standings, not everyone came out of it a loser. Thousands of fans packed the Coffey Field bleachers for the first time in nearly two years. The concession stand was open, the band was playing and the fans were cheering for the entirety of the game, illuminating the stark contrast between Saturday’s game and the games of the past shortened season.

The players also noticed the difference, as multiple Rams on the sidelines motioned to the bleachers in order to draw motivation from the raucous crowd. While the game may have been disappointing, it also represented a slight return to normalcy for Fordham players and fans alike.

The Fordham football season will continue on Sept. 18 when the Rams head to Boca Raton to play Florida Atlantic University in yet another nonconference game. Fordham will look to carry some positive momentum as they build up experience en route to future Patriot League competition. The game will be available on ESPN3 as well as on WFUV (90.7 FM).