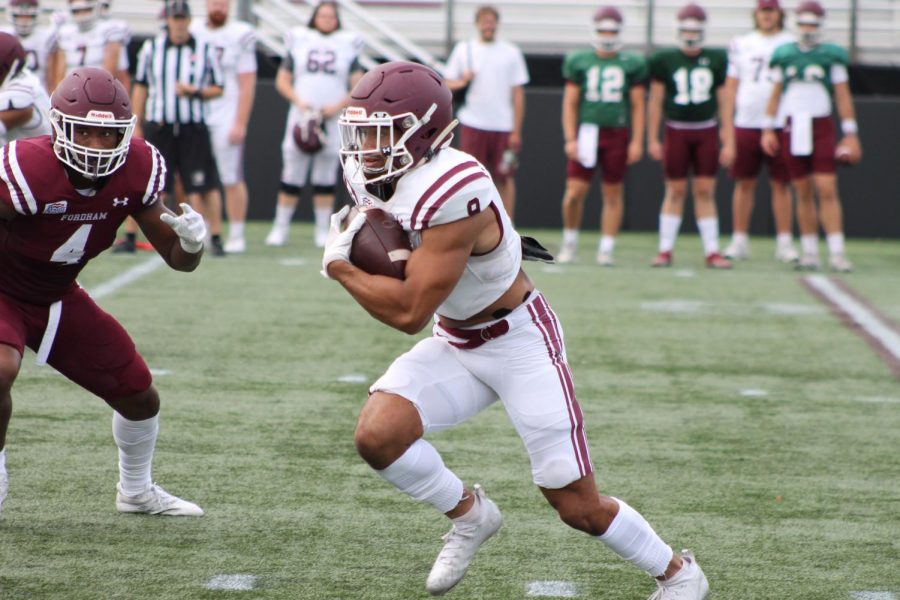 Coming off an injury, Zach Davis, GSAS ’22, is poised to return strong in his first appearance since the 2019 season.

Fordham football Head Coach Joe Conlin was just as excited as his players at summer workouts this year. The weather remains warm on the gridiron, but the sun sets earlier every day as autumn begins to set in. The waning weeks of summer evoke feelings in Conlin that are doubtlessly familiar to him by now after 17 years of coaching, but they take on new meaning after an involuntary two-year hiatus. For the first time since 2019, the Fordham football team is preparing for a full fall season, and the stakes will be high from the outset.

Though the Rams did manage to play through the COVID-19 pandemic last year, they only participated in three games in a shortened spring season. The team had not played a game in a year and a half and were playing in weather most often associated with baseball, but Conlin said that the team responded well to the foreign conditions.

“That was tough emotionally, especially on the seniors. But once we were able to line up and compete, the guys were more than excited to do that,” Conlin said.
Nonconference Challenges
After such an uncharacteristic season, players and coaches alike are happy to be returning to a typical fall schedule, which consists of several weeks of nonconference competition followed by games within the Patriot League that go toward conference standings.

This year, the conference schedule, beginning on Oct. 2 and ending on Nov. 20, is fairly standard, but some of the team’s nonconference games in September are sure to turn heads, either in genuine interest or morbid curiosity.

In the Rams’ first game on Sept. 4, they will travel to Lincoln, Nebraska, to play the University of Nebraska Cornhuskers, one of the most well-known programs in college football. The lopsided nature of this game cannot be understated.
“This is a once-in-a-lifetime experience, going to play in Lincoln in one of the great cathedrals of college football, and we’re just looking to play a good football game.”Joe Conlin, Fordham football Head Coach
For one, Nebraska plays in the Football Bowl Subdivision (FBS), while Fordham is in the lower-tier Football Championship Subdivision (FCS), the former of which hosts the National Championship and all other bowl games. The latter hosts Patriot League football.

While Fordham plays against the likes of Lehigh University and Bucknell University, Nebraska competes in the Big Ten Conference against powerhouses like Ohio State University and the University of Michigan. Since 2000, 73 Cornhuskers have been selected in the NFL Draft. Fordham has had two such players in the same span.

“What he’s doing so well now is getting the ball out of his hands faster than he ever has,” Conlin said. “He’s a tough kid, works really hard at it, so I’m really happy to see him have this on-field success.”
“It’s a good problem to have. We tell those guys going into the game that they’re basically going to alternate, and then we’re going to ride the hot hand if there is one.”Joe Conlin
With DeMorat under center, Fordham’s wide receivers should continue to prosper as they have in previous seasons. Dequece Carter, Gabelli School of Business at Rose Hill (GSBRH) ’23; Hamze El-Zayat, FCRH ’22; M.J. Wright, GSBRH ’23; and Fotis Kokosioulis, FCRH ’22, have all emerged as consistent conference leaders due to a large number of targets in an aggressive offensive play style.

While Fordham has proven effective through the air in recent years, their attack on the ground is nearly as potent. In fact, the struggle for Conlin at running back in recent years has not been finding a starter, but deciding between two equally talented options in Trey Sneed, FCRH ’22, and Zach Davis, Graduate School of Arts and Sciences ’22.

While Davis was sidelined by an injury last season, the pair combined for 1,565 rushing yards and 13 touchdowns the last time they shared the backfield in 2019. With Davis healthy again, he and Sneed should begin to compete for snaps again, which places responsibility on Conlin and the coaching staff to maximize the talents of both players at the position.
Even with a wealth of offensive talent, in order for the Rams to become a championship contender, they will have to improve on defense.
“It’s a good problem to have. We tell those guys going into the game that they’re basically going to alternate, and then we’re going to ride the hot hand if there is one,” Conlin said.
A Shaky Defense on the Rise
After hearing so much about Fordham’s elite offense in the Patriot League in recent years, one might wonder why the Rams haven’t come close to a conference championship in that time. While it would be unfair to place all of the blame on the defense, it is a frustrating fact that Fordham has lost far too many games despite solid offensive production.

Since 2018, Fordham has scored at least 20 points in 15 games, but the team has only managed to go 7-8 in that advantageous position. A few of these losses came in blowouts against superior teams, but too many of them occurred against conference rivals in high-scoring shootouts. Even with a wealth of offensive talent, in order for the Rams to become a championship contender, they will have to improve on defense. Fortunately, the pieces may be coming together just in time.

Despite the team’s defensive woes as a unit, linebacker Ryan Greenhagen, GSBRH ’22, has consistently impressed since earning a starting job in his freshman year. Now a senior, Greenhagen is coming off a dominant 2020-21 season in which he recorded 22 tackles in just two starts and won the Patriot League Defensive Player of the Year Award.
They have come tantalizingly close to becoming a solid program and a breakthrough may be imminent.
With DeMorat winning the Offensive Player of the Year, it may seem frustrating that the Rams missed the postseason with the conference’s best player on both sides of the ball, but it can also be seen as a reason to look forward to the season to come. The return of cornerback Jesse Bramble, FCRH ’22, may be another reason. A team captain since 2019, Bramble missed the 2020-21 season with an injury and enters his fifth year with the Rams in the hopes of bolstering a secondary that has struggled at times containing opposing receivers.

“What we’ve done better in our secondary has been eliminating yards after catch,” Conlin said. “We’re playing a little bit closer on routes, being a little more physical with wide receivers, and those guys are running to the football better than they ever have.”

While stars are always a welcome addition on any roster, the impact of one individual on defense is not always as profound as an offensive player. In order for players like Greenhagen and Bramble to shine this season, the defense will have to work as a unit to prevent high-scoring affairs that have become commonplace on Coffey Field in recent years. Conlin cited strong safety Natani Drati, GSBRH ’22, and lineman Elisha Armstrong, FCRH ’22, as exciting supporting characters to watch as the season progresses.
The Bottom Line
In comparison to other Fordham sports in recent years, it is arguable that squandered potential has made the football team the most frustrating program on campus. Despite building one of Fordham’s best rosters, the team has not matched the success of the women’s basketball, softball and baseball programs. They have come tantalizingly close to becoming a solid program and a breakthrough may be imminent.

Since 2019, the Rams have gone from an underdeveloped upstart to a team with distinguished veteran leadership, just in time for the return of fall football in the Bronx. Fans may have to momentarily avert their eyes when the Rams take on the Cornhuskers and Owls early in the season, but with conference play right around the corner, it may be worthwhile to stay tuned.