Ram Jams: Tyler, the Creator’s ‘CALL ME IF YOU GET LOST’

Tyler, the Creator explores a wide variety of influences in his latest album 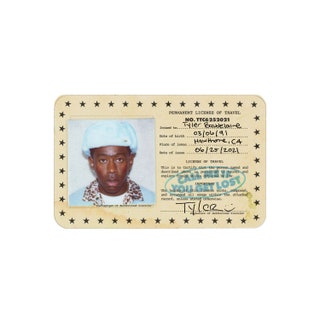 Tyler, the Creator's latest album uses a travel motif to deliver one of the artist's best projects.

Few things in the past decade have been as consistent as Tyler, the Creator’s album releases. The former Odd Future leader has dropped an album every odd year since 2009, when he made waves with his unhinged debut mixtape “Bastard.” Since then, he’s traversed a wide range of sounds, from the experimental chaos of 2015’s “Cherry Bomb” to the poppier “IGOR” in 2019. With his latest offering, “CALL ME IF YOU GET LOST” (“CMIYGL”), Tyler travels through a diverse range of influences and sounds to create a chaotic yet focused project that stands among his best work.

The album begins with a run of six songs that combined clock in at less than 2:40. For a project so rooted in the motif of travel (see: the passport on its cover, the skits that have accompanied its release), it’s appropriate that over the course of these first songs, Tyler doesn’t stay in one place for too long.

Despite the rapid pace, though, the tracks don’t feel rushed. Much of this is due to Tyler’s production, which is consistently dense and layered with drums, synths, keys, harmonies and ad-libs, but so meticulous that the listener becomes immersed rather than overwhelmed. Take the summery “WUSYANAME,” for example: On paper, it might be hard to imagine packing an intro, outro, hook and two verses (including a stellar one from YoungBoy Never Broke Again) into a two-minute song. In practice, however, the track is almost relaxing.
As it turns out, it’s hard to get lost with Drama playing the role of the navigator.
This makes it all the more surprising that the relative leisure of “WUSYANAME” is sandwiched between some of the album’s hardest-hitting tracks, from the speaker-rattling “CORSO” and the thunderous tuba of “LEMONHEAD” to the frenetic keys of the lead single “LUMBERJACK.” Helping to tie these tracks together is DJ Drama, the legendary “Gangsta Grillz” DJ whom Tyler enlisted to host the project (something Tyler’s been wishing for since at least 2010). Drama’s barrage of ad-libs serves as an anchor of sorts, constantly reminding his audience where they are (this is true in the literal sense — “We just landed in Geneva!” he exclaims on “HOT WIND BLOWS” — and in the context of the album, as he shouts its title quite frequently).

As it turns out, it’s hard to get lost with Drama playing the role of the navigator.

When the album reaches its seventh track, the introspective and somewhat laid-back “MASSA,” Tyler steps back and begins to flesh out the more thematic elements of the album. The track finds him dealing with his past and his present, drawing a line between his former money problems — having to get his mom out of a shelter when he first made it big — and his current ones: the eight figures that get taken from him by income taxes. In either case, he concludes that “You can’t relate to these things I say to these instrumentals / Whether it’s wealth talk or shit that’s painful.”

Two tracks later, he enlists Domo Genesis for the equally introspective but far more forceful “MANIFESTO,” on which Tyler harangues those who have criticized him for the way he chooses to engage in activism: “I feel like anything I say, dawg, I’m screwin’ shit up / So I just tell these Black babies, they should do what they want.” He’s aware of his own shortcomings as a voice for others, but simultaneously resists the notion that there’s a correct way for him to live his life, especially as a bisexual Black man.
Tyler is consistently adept at incorporating guest vocals into his tracks, often treating features like additional elements in his production arsenal rather than something to tack on afterward.
Immediately following “MANIFESTO” is album centerpiece “SWEET / I THOUGHT YOU WANTED TO DANCE” (“SWEET / ITYWTD”), which continues the trend of multi-part tenth tracks on Tyler’s projects. Over the course of its nearly ten-minute runtime, the track explores the dynamic between Tyler and a woman who is in another relationship, a theme of the album first shown in a teaser of “SWEET” on Instagram (fellow Odd Future member Taco plays the woman’s boyfriend in the teaser and throughout the other videos that comprise the “CMIYGL” Cinematic Universe).

“SWEET” finds Tyler swooning unabashedly over the otherwise preoccupied girl with the help of R&B mainstay Brent Faiyaz, but as he finds out in the song’s second half, the serenade is fruitless. Over a dub instrumental quite unlike anything on Tyler’s previous projects, Fana Hues sings from the girl’s perspective, claiming that although she has strong feelings for Tyler, the timing is wrong and things simply can’t work out.

Before he revisits the relationship on “WILSHIRE,” Tyler squeezes in two interludes and two tracks. The first of these songs, “RISE!” is an upbeat middle finger to the haters, featuring production work from electronic artist Jaime XX and vocals from DAISY WORLD (who spoke to The Ram with her band earlier this year). Whether it’s relative newcomers like DAISY WORLD or established stars like Brent Faiyaz, Tyler is consistently adept at incorporating guest vocals into his tracks, often treating features like additional elements in his production arsenal rather than something to tack on afterward.

The second of the two is “JUGGERNAUT,” the album’s hardest-hitting song. Here, he’s accompanied by Lil Uzi Vert and Pharrell; Uzi turns in a slightly disappointing verse with an uncharacteristically awkward flow, while Skateboard P’s contribution is characteristically strong. Still, the song is rather underwhelming, especially considering the chemistry Uzi and Pharrell have previously displayed.

The album then mellows out considerably for the sprawling “WILSHIRE,” where Tyler more directly discusses the relationship presented on “SWEET / ITYWTD.” The instrumental on the track is notably sparse and unchanging, with nothing more than some simple drums and a basic synth melody escorting Tyler through his description of the affair. It’s a stark contrast from the rest of “CMIYGL,” but the minimalism serves as a way to force focus onto Tyler’s storytelling on the track, which is among the best in his catalogue.

Recorded in one take on a handheld mic (as evidenced by the extremely annoying crackling in the right ear throughout the song), “WILSHIRE” tells of the beginning of the relationship, the bliss and simultaneous guilt he felt during it, and the eventual fallout that led him to the same conclusion the girl reached on “I THOUGHT YOU WANTED TO DANCE”: “It was beautiful / I was able to feel / But it was, it was bad timing.” Though the strength of the lyricism here is enough to make the song a strong one, the eight-minutes-plus that the song occupies wouldn’t have been worse off with some variation. It’s hard not to wonder whether the tenth track would’ve been a stronger focal point if it combined the musical elements of “SWEET / ITYWTD” with the writing of “WILSHIRE.”
Materialism was the first escape from sadness Tyler used when he got rich; now that he’s even richer, he can afford to literally escape to anywhere on the globe.
After Tyler closes “WILSHIRE” with the denouement that the girl is “just another chapter in the book,” the album closes with “SAFARI” featuring production from Vine star turned producer Jay Versace. Over a set of triumphant horns, Tyler delves into braggadocio, flexing the exotic locations he travels to and the equally exotic vehicles he travels in.

The track is a perfect closer for a number of reasons. On the surface, it wraps up the theme of travel, “CMIYGL’s” most consistent concept, by engaging with it literally: At this point in his career, Tyler is able to go places he’s never been before in cars, boats and planes he couldn’t have afforded years ago. However, underlying that flex is a sadness that he’s addressed in the past, such as on “911 / Mr. Lonely” and continues to discuss here on tracks like “CORSO”: “Eyes is cryin’ on the jet, cruisin’ / ’Bout to spend millions, just to fill voids up.”

Materialism was the first escape from sadness Tyler used when he got rich; now that he’s even richer, he can afford to literally escape to anywhere on the globe. Though Tyler invites his listeners to “CALL ME IF YOU GET LOST,” by its conclusion there is the melancholic undertone that it’s actually him who’s lost. But as he says himself, he can always buy a boat, “’cause [he’d] rather cry in the ocean.” Not all of us have that luxury.

The Bottom Line: Tyler’s sixth studio album is proof of his constant artistic growth, even if he hasn’t outgrown his demons. “CALL ME IF YOU GET LOST” is one of the best projects in his increasingly impressive body of work. It’s endlessly exciting to see where he’ll travel next.

The Valleys: “LEMONHEAD” and “JUGGERNAUT”