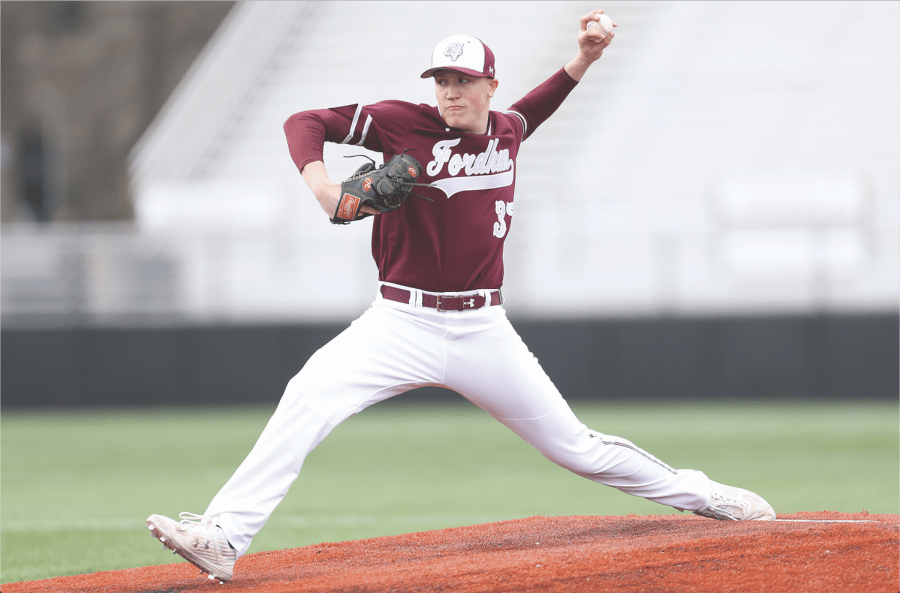 Matt Mikulski, FCRH ’21, pictured in a 2019 game against St. Bonaventure, was a star pitcher for the Rams and has been drafted by the San Francisco Giants.

For the sixth MLB draft in seven years, a member of the Fordham baseball team is big-league bound. Pitcher Matt Mikulski, Fordham College at Rose Hill (FCRH) ’21, was selected with the 50th overall pick by the San Francisco Giants in the 2021 draft on Monday, July 12. After a historic senior season as the Rams’ ace, he will now begin a professional career with immense promise.

Hints of Mikulski’s star power first appeared in his junior year after two middling seasons, when the lefty compiled a 2-1 record and 1.29 ERA in four starts in 2020. His first dominant run in college baseball was cut short, however, when the Atlantic 10 (A10) conference canceled all spring athletic events in the wake of the COVID-19 pandemic.

Early draft projections in 2020 suggested that Mikulski could have been drafted as a mid-tier prospect, but he had not shown nearly enough ability in the shortened season to qualify for a pick in an early round. When MLB officials announced that the draft would be truncated to five rounds due to the pandemic, he became one of several Fordham prospects to go undrafted.

While Fordham seniors Jake MacKenzie and John Stankiewicz, both Gabelli School of Business at Rose Hill ’20, eventually signed contracts with the Boston Red Sox and Minnesota Twins, Mikulski took advantage of his remaining year of eligibility and returned to the Bronx. During the pandemic, he worked extensively and emerged in the 2021 season with newfound velocity and control to match. His fastball consistently reached 95 MPH and even flirted with triple digits on the speedometer as needed. Batters that struggled against him before were about to become completely hapless.

In his first start as Fordham’s new ace on March 6 against the New Jersey Institute of Technology (NJIT), Mikulski allowed two runs on four hits while striking out eight batters in four innings. A worthy opponent, NJIT went on to have an outstanding postseason and went all the way to the Fayetteville Super Regional Tournament.

It was a high-octane, if mortal, season debut for Mikulski, but in retrospect, it was merely a harbinger for the havoc he would go on to wreak. Even in a historically successful baseball program that has molded multiple MLB-caliber pitchers, Mikulski’s 2021 season at Fordham has eclipsed nearly all others.
His strikeout-to-walk ratio, a statistic used to evaluate power and control, also improved to 4.6, a formidable number in Division I baseball.
Following his debut against NJIT, Fordham’s top prospect allowed two runs combined in his next six starts, a mind-boggling feat that lowered his ERA to 0.86 by April 17. In that span, he struck out 68 batters, and by the end of March, he dominated the A10 conference in nearly every statistic. By mid-April, he ranked as one of the best pitchers in college baseball.

Nearly every start Mikulski made this season led to a statline worthy of a double-take. At Seton Hall on April 3, he threw a complete game two-hitter, striking out 12 batters and walking none. One week later, he faced St. Bonaventure and allowed one hit in seven innings with 16 strikeouts.

In his worst start of the season on May 1, he allowed three runs against the University of Massachusetts but still struck out 11 in five and two thirds innings. Even as teams began to adjust to the flamethrowing southpaw, he was still largely untouchable. By season’s end, Mikulski compiled a 9-0 record with a 1.45 ERA and 128 strikeouts. His strikeout-to-walk ratio, a statistic used to evaluate power and control, also improved to 4.6, a formidable number in Division I baseball.

After the Rams’ final game in 2021, Head Coach Kevin Leighton took to Twitter to express appreciation for Mikulski’s contributions to Fordham baseball.

“Amazing to watch Matt Mikulski over his career,” Leighton said. “He gave his teammates and coaches everything he had every time. At the end of the day that’s all you can ask of a player. So proud of you Matt, you have earned it.”

Amazing to watch Matt Mikulski over his career. He gave his teammates and coaches everything he had every time. At the end of the day that’s all you can ask of a player. So proud of you Matt, you have #Earned it. #StrikeoutKing #WhatsNext #JustGettingStarted pic.twitter.com/OnksvcrgPu

After such a spectacular showcase of skill in his senior year, what was once a possibility became an inevitability. Mikulski was drafted. Despite lofty projections landing him late in the first round, he eventually was selected in the second round with the 50th overall pick by the San Francisco Giants. The culmination of one of the greatest seasons in Fordham history puts him in highly exclusive company.

While nine Rams were drafted before Mikulski since 2011, Jimmy Murphy’s selection in the eighth round by the Baltimore Orioles in 2017 was the highest any of them had been taken. In fact, Mikulski’s second-round selection is the earliest for a Fordham player since 1987, when future MLB All-Star Pete Harnisch was taken by the Orioles in the first round with the 27th overall pick.

Going forward, Mikulski’s career in the minor leagues may be just as volatile as any other draftee’s, but his paths to an MLB roster are bountiful. A powerful arm and high maximum velocity could make him an attractive addition to the Giants’ bullpen in years to come, though his days as a starting pitcher may be far from over.