Fordham Alum Dedicates Himself to Classroom: ‘When I saw that kids wanted to learn, it made me realize that I wanted to teach’ 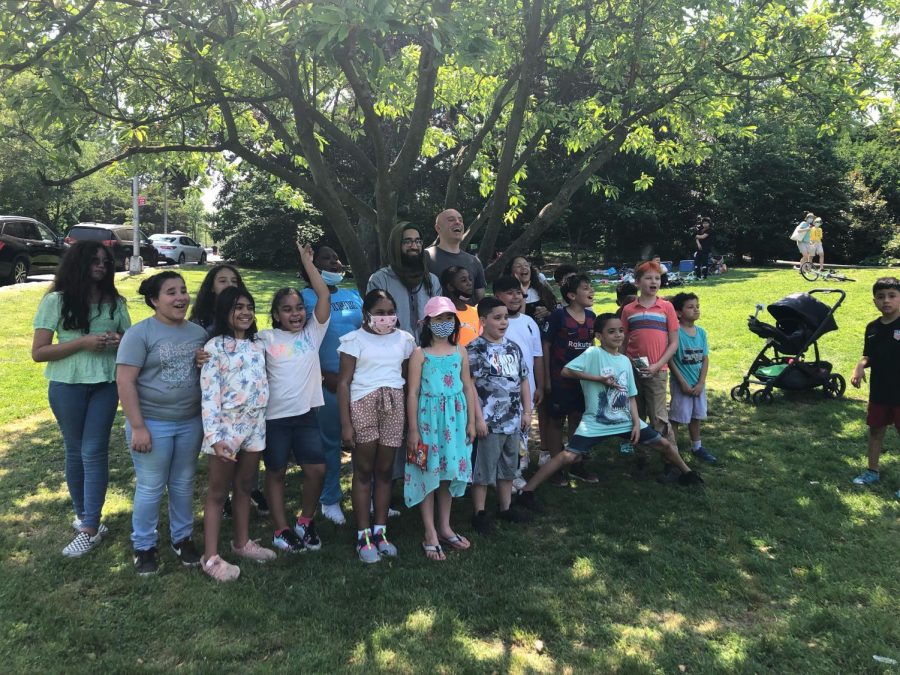 By the end of the academic year, Mobeen Ahmed was able to hold an outdoor graduation party for his fourth grade students.

Mobeen Ahmed, Fordham College at Lincoln Center (FCLC) ’20, always found it easier to talk to kids than to people his own age.

Growing up in a large Pakistani family, he spent a lot of time with his younger cousins. Ahmed captured their attention by telling stories, pulling them away from their gaming devices and YouTube videos.

“Talking to kids is more interesting because everything you say blows their minds,” he said.

His natural teaching abilities culminated in unexpected ways after he departed Fordham in 2020.

During his junior year of college, Ahmed applied for a Fulbright scholarship and received an offer to teach English in Indonesia post-graduation. “For right after college, I had everything set,” he said.

The coronavirus pandemic hit the U.S. three months before his graduation, leading to the program’s delay, then ultimately to its cancellation.
“Every kid was a different story. It was definitely a struggle of finding out how I can help every kid learn in an effective way right now.”Mobeen Ahmed, FCLC ’20
“My parents were like ‘What are you going to do now?’ and I was like ‘Nothing, we’re in a pandemic,’ but they said ‘You can’t just sit at home,’” Ahmed said.

He received a recommendation to apply to Success Academy (SA) Charter Schools since there is no certification requirement when hiring teachers. Mobeen gained tutoring and counseling experience at Fordham, and he received an offer to be an associate teacher in a fourth grade classroom at SA’s Washington Heights elementary school.

Originally, Ahmed was supposed to teach in-person, but the entire school year was administered online. He said SA had a great technology rollout, and he received a Macbook laptop and an additional monitor.
Ahmed graduated from Fordham with two degrees in visual arts and international political economy, neither of which were specifically suited for teaching fourth graders.
For many of his students, it was impossible to learn virtually. Little siblings ran around the back of the kids’ Zoom calls and parents could be overheard working in the same room.

“Every kid was a different story,” he said. “It was definitely a struggle of finding out how I can help every kid learn in an effective way right now.”

As an associate teacher, he did not lead class and instead helped individual students with their needs. However, within the first month of the school year, his lead teacher quit. Ahmed was in charge of a classroom of 30 nine- and ten-year-olds.

“Very quickly I was put front and center and I was scrambling for what to do,” he said. “My approach was to tell the kids that I don’t know what I’m doing.”

Ahmed graduated from Fordham with two degrees in visual arts and international political economy, neither of which were specifically suited for teaching fourth graders. He found ways to apply what he learned at the university level to his classroom by developing creative lesson plans and customizing assignments with his visual arts knowledge to engage his students more. He also demonstrated his skills in international political economy by introducing time to discuss world affairs.

“I wanted them to have a more robust view of the world to better understand it,” Ahmed said. “When I was in grade school, it was very much ‘What does the white man want to teach you?’ and I wanted to move away from that.”
Ikeda was new to the school but said Ahmed made it possible for her to make friends since she felt so comfortable in his class.
Ahmed’s class was majority students of color, with a large Dominican population.

When he began to teach history lessons, which included events such as the arrival of Christopher Columbus in the Americas, Ahmed used anecdotes to help the students understand the material from a nonwhite lens.

“I noticed I could start to use the same language I learned in college and start applying it now for the students,” he said.

Ahmed knew that distractions are everywhere for virtual students, so he did his best to make lessons engaging: “I got to know each one of my students very well and would tell them jokes during lessons.”
“I learned a lot this year. He was also able to play games and do fun things while still teaching. He has a special place in my heart, and I will miss him a lot.”Aili Ikeda, student in Ahmed Mobeen’s class
“Our son Siebo came alive in Mr. Mobeen’s class,” Tracey Keij-Denton, a parent of one of Ahmed’s students, said. “When we would ask him about school, he would always have a story about something Mr. Mobeen said, and the jokes he would tell. Mr. Mobeen got to know the students individually and let them know it was okay to laugh at themselves.”

Ahmed recalled not paying attention in his own online classes at the end of his college career: “I am 22, imagine how a ten-year-old is thinking.” He decided to focus on his relationships with the students, and they began reaching the academic achievement goals that he set for them.

“One of the things I learned from him was how to be patient,” Sophia Almanzar, a student in Ahmed’s class, said. “When I did not understand a subject, he would take his time and explain it over and over. He would always take his time and be in a good mood. We appreciate him and we are grateful that he was our teacher!”
Once state social distancing restrictions started to be repealed, Ahmed hosted students at his house in Yonkers for in-person tutoring sessions.
Aili Ikeda, another student, said she went to class early because it was so fun.

“I learned a lot this year,” she said. “He was also able to play games and do fun things while still teaching. He has a special place in my heart, and I will miss him a lot.”

Once state social distancing restrictions started to be repealed, Ahmed hosted students at his house in Yonkers for in-person tutoring sessions.

“They need their mistakes caught in the moment and if the teacher isn’t there or this is a glitch, they continue doing what they’re doing and there is no one to verify for them,” he said.
Ahmed said it felt like Fordham prepared him to be a teacher since his professors taught him to effectively question and engage with the world in a meaningful way.
At the end of the year he also held an outdoor graduation party, since students graduate elementary school in fourth grade at SA.

“It was really wholesome. It gave me a taste of what it would have been like to teach in person,” he said. “One of my students stopped and stared at me and said ‘Wow, you’re a real person.’”

Since the end of the academic year, Ahmed’s students have kept in contact with him. However, he does not plan to return to the classroom — at least not in New York.

For the 2021-22 academic year, Ahmed plans to teach fourth graders on Penghu Island off the coast of Taiwan. “With any change, you just have to make the most of it,” he said about teaching abroad in Taiwan instead of Indonesia. “After this year, I am ready for it. Throw any challenge at me and I can handle it.”

He recommends that other Fordham students consider teaching because it is “a great way to learn about yourself.” Ahmed said it felt like Fordham prepared him to be a teacher since his professors taught him to effectively question and engage with the world in a meaningful way.

In response to the St. Ignatius of Loyola quote “go forth and set the world on fire” that Fordham graduates hear at commencement, Ahmed replied, “the world is already on fire, how can I cool it down a little bit?’” To him, the answer is teaching.