Fordham’s Amaya Braganza sings with her sisters in The Braganza Sisters to write and perform new singles, with more projects on the way 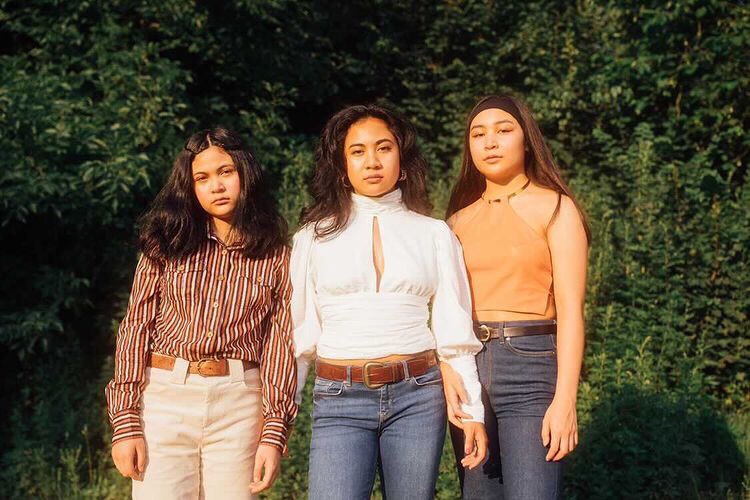 The Braganza Sisters create and perform their own original songs as a trio. They base their lyrics and rhythms on the life experiences they've had in California and New York.

Creativity and original music are plentiful at Fordham, as The Observer has covered in previous years; there are fewer group acts, though, and family acts are even more sporadic. Because of this rarity — in addition to the uniqueness of their sound — I came down to Sweet Chick in Williamsburg to interview The Braganza Sisters: Anika; Amaya, Fordham College at Lincoln Center ’23; and Adriana Braganza. It was a Friday night with very lively surroundings, and at times it was hard to parse out what the sisters were saying as it was mixed in with revving engines and other patrons by our outdoor dining wooden bench.

Such an environment is what The Braganza Sisters sang about in their newest single “Summer Rain.” The inspiration for the song came from when Anika was babysitting outside shortly after she had been vaccinated. She pondered how it felt to once again actually want to feel another person or see someone outside her household, which eventually led to the song.

Amaya noted how “the connection, especially with the time of isolation we’ve had so far,” makes the song relevant. The “Why not” and laughing at the end of the song was a candid recording of the sisters. They kept the clip because they laugh together a lot, as their Instagram bio suggests.
“My songs before that were about dreaming about or wanting a person, and this one is more about realizing your worth.” Anika Braganza, eldest of The Braganza Sisters
Anika Braganza is the eldest sister of the trio and a graduate of NYU. She writes the lyrics and does the instrumentals for the compositions. Adriana is the youngest of the trio at 14 years old, and their sisters call them “Gings.” They were in the Lincoln Center production and national tour of “The King and I.” In addition to also performing in “The King and I,” Amaya previously toured the country singing and is part of the Screen Actors Guild (SAG) and Equity, the union for theater and film.

The songs The Braganaza Sisters have are as unique as their biographies. In “I Fell,” the acoustics and slowness relative to their other discography is quite noticeable. Anika played the ukulele for this song. “I Fell” presents a naturalistic depiction of love and is different from the other songs since it talks about something in the present moment rather than a hypothetical scenario. Anika also described the love in “I Fell” as “youthful,” so the sisters had Adriana sing this song.

For “ERROR,” the error was made by unrequited love, not the singer. Anika said, “It’s more of an empowering song” compared to her previous work: “My songs before that were about dreaming about or wanting a person, and this one is more about realizing your worth.”

“Still Yours” helped bring attention to a more general theme with their music: relationships that fail due to unrequited love or some other convoluted reason. It is a challenge for Anika, especially as a strong independent woman, “to access that vulnerable part of yourself.”

Prior to “ERROR,” the songs were not about the mistakes of the other person but “being invisible,” so in that sense, the songs gave a sense of visibility. Anika also explained how all three of the sisters have yet to have serious romantic relationships due to work, school and other obligations. The songs they make therefore serve as a sort of fantasy if things were different.

“Holographic Love” was a collaboration with Jasmine Niquel, Anika’s friend from NYU who specialized in music tech and provided much-needed assistance, since the sisters are trained in theater. Niquel worked on the harmonies of the song and helped produce it. Anika said it was great working together because Niquel was easy to work with and “always wants the best and will give the best.” As for the song itself, Amaya said it’s about “one-sided love.” Anika continued, “No matter how real it is to you, it’s just not a real thing.” To emphasize this metaphor, Anika made a comparison to the holograms in Star Wars in the interview.
“A lot of our music encompasses that (Californian) breeze.” Amaya Braganza, FCLC ’23
The Braganza Sisters’ Spotify bio describes their music as a “melting pot” of California and New York City. Amaya noted how the sisters grew up in Orange County and said, “A lot of our music encompasses that (Californian) breeze,” with a “mellow and daydreamy” quality to their songs. However, a lot of their songs also have a strong beat and drive, which Amaya associates with New York.

A particular part of their background that relates to their music and New York is theater, since all three Braganza sisters have performed onstage before, and Amaya and Adriana have performed on Broadway.

Currently, The Braganza Sisters are working on a music video for “Summer Rain.” The video will be released soon and will offer a more clear interpretation of the song from the sisters’ perspective, Amaya said. Besides the upcoming video, the sisters are also working on more songs.

The Braganza Sisters will be performing at the Bushwick Public House in Brooklyn by The Wandering Ear, the same organization behind a podcast interview the sisters did, at 8 p.m. on July 31, with doors opening at 7 p.m. The venue limits attendance to those 21 and older and will include performances by other artists and artists of color. According to Amaya, “It’s going to be a blast.”