Capitalist Greed, Gluttony and Fear: Why I Couldn’t Take My Eyes Off ‘Spirited Away’

Hayao Miyazaki’s classic remains a poignant examination of life, even 20 years after its Japanese release 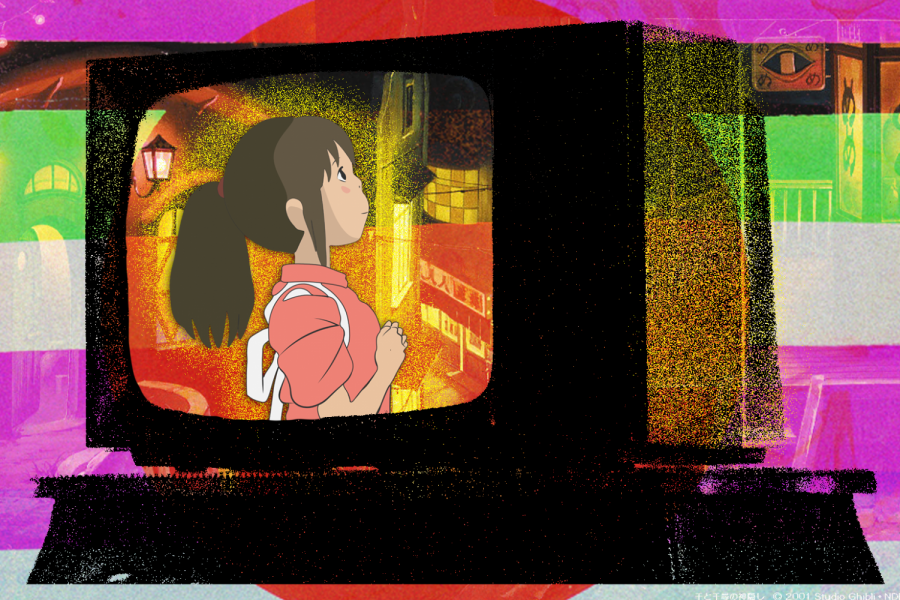 Twenty years later, Chihiro’s evocative voyage remains a triumphant reflection on the audience’s relationship with uncontrollable growth, purpose and ability to push through a demanding world.

I never understood “Spirited Away” when I was younger. Previously known to me by its French title “Le Voyage de Chihiro (Chihiro’s Voyage),” I didn’t love this mesmerizing adventure. It was more the creepy, multi-armed, spectacled man, cute radish creature, mysterious dragon and abundance of more unsettling and outlandish imagery that drew me to consistently rewatch director Hayao Miyazaki’s masterpiece. This habit lasted until September of 2007, when at the age of five, I moved from France to the United States, and the world of “Spirited Away” faded to nothing but vague images and a persistent air of mystery.

I don’t know what compelled me to rewatch it in these past months. Maybe it was my revitalized interest in animated movies after watching “Soul,” or my desire to do something with my movie-loving younger sister, or simply a need for a spontaneous injection of nostalgia. Nevertheless, I sat down with my sister in the living room intending to decipher what the movie was about. With that goal in mind, I carefully examined every scene, and this time, I ended up falling in love with the movie that had once mystified me.

“Spirited Away” tells the tale of Chihiro as she, along with her parents, move to a town in rural Japan. Initially apprehensive about the move, Chihiro acts like an entitled young child as she constantly complains and voices her impatience. When her parents investigate an interesting abandoned theme park, they lose themselves in the endless amount of food that is freely given to them, turning them into literal mindless pigs. This act of pure gluttony plunges Chihiro into a world of strange spirits, scary creatures and imposing expectations. Stripped of her possessions, her family and even her name, Chihiro is tasked with working in Yubaba’s bathhouse, a popular destination for wealthy creatures looking to have a pleasant time.

Throughout the film, Chihiro is forced to grapple with the monotonous, draining and unforgiving nature of adulthood within a capitalist world. Miyazaki demonstrates his disdain for the greedy practices that reduce honest workers into mere cogs in a money-making machine. Everyone overworks themselves by appealing to their superior and maximizing the satisfaction of the bathhouse customers for monetary gain. Unlike all of the other bathhouse workers, Chihiro stands out as an embodiment of moderation and kindness. She doesn’t relish in the excesses of money or luxury but rather stays fixated on her goal to save her parents. This obsession with wealth juxtaposes Chihiro’s compassion towards every individual and instills the viewer with an acute awareness of the real-world dangers of gluttony, consumerism and excess.

In addition to its consistent condemnation of capitalism and greed, “Spirited Away” also reinforces the harsh message that the world is not your friend. Despite that discouraging reality, Chihiro discovers that empathy and thoughtfulness aren’t worthless. After all, it is her selflessness that saves her from No-Face’s wrath, gets her closer to Haku, earns her the respect of the river spirit and gets her family back.

Being thrust into a world of responsibility and adulthood means that Chihiro now has to worry about the future. Her sacrifices and hard work are all in the service of getting her parents back. Throughout this maturing process, Chihiro grows from a naive and spoiled brat to a steadfast and courageous woman who uses her cunningness and heart to save herself, her parents and her companions.
“Spirited Away” tied my 5-year-old shy and frightened immigrant self to my 19-year-old rising college sophomore self.
Almost 20 years later, Chihiro’s evocative voyage remains a triumphant reflection on the audience’s relationship with their uncontrollable growth, their purpose and their ability to push through a demanding world.

Upon finishing my rewatch, I wondered why I hadn’t been inclined to watch the movie since I moved from France to New York. Then I realized I had been through my very own adventure filled with discovery, awe and fear. I didn’t need Chihiro because I had my own Yubaba in my intimidating kindergarten assistant teacher; my own Haku in my friends, guiding me through my strange new world in New York City. I sat for a while, each passing minute bringing me closer to my first in-person year of college, with this movie being the bridge connecting the past years of my life.

“Spirited Away” tied my 5-year-old shy and frightened immigrant self to my 19-year-old rising college sophomore self. I was enamored by it prior to my journey almost 14 years ago. It feels only right for me to revisit it as I embark on another one.
Despite all the chaos, the doubt and the confusion, we have to push through with confidence, selflessness and purpose to create the future that we desire.
It is easy to succumb to cynicism when everything around us seems hopeless. Exploitation, injustice and greed permeate our world the same way it invades Miyazaki’s. The ominous fear of independence, the crushing weight of responsibility and the vexing pain of hopelessness are all universal parts of the human experiences highlighted by his oppressive world. A lot of people our age feel these emotions more than any other demographic because we are inheriting such an imperfect world.

As we college students begin to lose our comforting attachment to the present and start working for our future, Chihiro teaches us that it’s okay to be scared. Despite all the chaos, the doubt and the confusion, we have to push through with confidence, selflessness and purpose to create the future that we desire. We’ll all have a Yubaba, a Haku, a bathhouse, maybe even a No-Face as we grow and change our world. Like Chihiro, we must find peace amidst the chaos, spread kindness within the cruelty and discover the island within the endless sea. We can readily relate to her in these defining, sometimes daunting times of our lives, but the movie’s timeless message of growth and responsibility means that Chihiro’s voyage will keep subtly echoing ours, even in our most intimate moments.