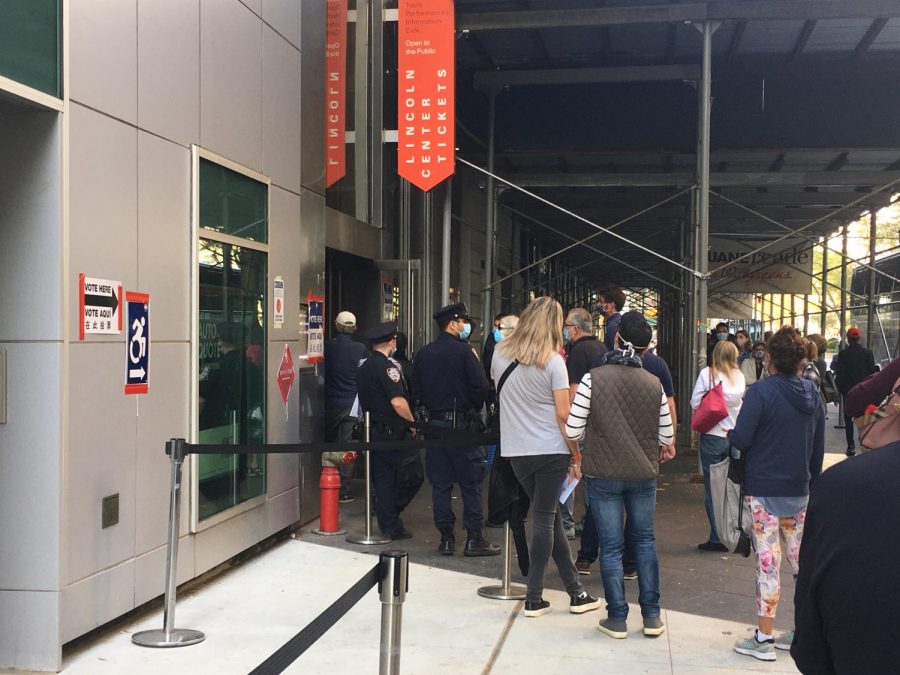 Voters line up near the Lincoln Center campus. The New York primary is on June 22, and 13 candidates are running for the position of mayor.

By MARYAM BESHARA and INSIYA GANDHI

The 2021 New York City mayoral race consists of Democratic and Republican primaries which will determine the candidates for the general election. The primaries take place on Tuesday, June 22; however, early voting already began on Saturday, June 12, and is ending on Sunday, June 20. The general election will take place on Nov. 2, with independent and minor party candidates also in the race.

As of 2021, ranked-choice voting will be used in primary and special elections for public office in NYC, allowing voters to rank up to five candidates of their choosing. Ranked-choice voting was elected in 2019 and its notable benefits include promoting majority support and providing multiple options for voters.

The new nonpartisan voter education platform MyVote Project is hosting a series of virtual forums on ranked-choice voting and its impact on voter education, as well as the political landscape of New York City, leading up to the June 22 primaries.
“We think voter education matters now more than ever, and want as many people as possible to know they can utilize this resource.” Meera Nagulendran, a volunteer with MyVote Project
Meera Nagulendran, a second-year student from Baruch College Campus High School, volunteers for the platform, which was started by a survivor of the Parkland school shooting and currently has over 250 volunteers from all over the country.

“We think voter education matters now more than ever, and want as many people as possible to know they can utilize this resource,” she said. “On our website, one can just type in their zip code and all national, state, and local candidates and policies for their area are available.”

Nagulendran said MyVote Project is partnering with local organizations based in each borough, inviting candidates to attend discussions and talking to voters in the streets.

The main issues that the 13 candidates intend on addressing are the economic and social recovery following the COVID-19 pandemic, policing, the city’s rising crime rates and the public school system.

Nusaiba Chakladar, Fordham College at Lincoln Center (FCLC) ’24 and a resident of the Astoria neighborhood in Queens, New York, felt that Andrew Yang’s policies were unreflective of her values and failed to represent working-class New Yorkers.

“He is not a New Yorker and does not represent this city,” she said. “He doesn’t uphold the city’s values, and he doesn’t even live in the city to know how it works and feels. He cannot connect to the working class and is being endorsed by the upper class.”

In contrast, Naimal Christi, FCLC ’23 and a resident of Brooklyn, viewed the candidacies of Yang and Eric Adams as exciting. She expressed dissatisfaction with current mayor Bill de Blasio’s term, believing that he inadequately managed housing inequality, homelessness, racial justice and education.

The candidates for the New York City mayoral race have drastically different propositions on how to address the current public health crisis, along with affordable housing, crime rates, unemployment rates and homelessness.
“We can’t just keep pushing people into overcrowded shelters with no other supports in place!” Ritamarie Pepe, FCLC ’22
Ritamarie Pepe, FCLC ’22 and a Brooklyn native, discussed the changes she wants to see in her neighborhood and the importance of a candidate who addresses homelessness and views housing as a human right.

“It’s also important that this candidate doesn’t just plan on expanding shelters or short term solutions, but focuses on implementing long term programs such as treatment programs, mental health facilities, career development services, and more to help people get back on their feet,” she added. “We can’t just keep pushing people into overcrowded shelters with no other supports in place!”

Residents of New York City can either vote in person or request an absentee ballot in-person prior to the June 21 deadline. Voters must vote at their designated polling place between 6 a.m. and 9 p.m.