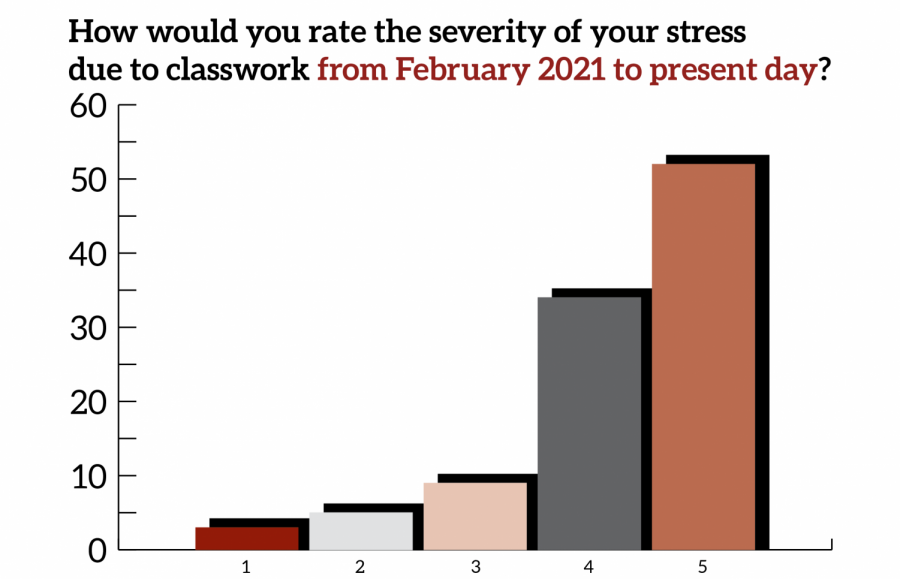 Student responders stated that their stress due to classwork was highest between February and May 2021, with most responding a 4 of 5 on the scale of least to most stressful.

By GUS DUPREE and KATRINA LAMBERT

The 2020-21 academic year has concluded and with it, the first year in academic history where most students attended classes entirely from home. This unprecedented year has been marked by dramatic social upheaval, from social distancing mandates in response to COVID-19 to an invigorated resurgence of the Black Lives Matter movement after the murder of George Floyd by a white police officer.

This change has added extra weight to almost everyone. College students in particular have had to grapple with the aforementioned civil rights and medical issues on top of balancing academic work online.
A Look Through the Numbers
The Fordham Observer released a survey asking students to rate and report the sources and intensities of anxiety experienced over the prior year. As of publication, the survey received 103 responses. Of these respondents, a vast majority —  91.3% (n= 94) — reported an increase in “school-related stress and anxiety” over the year.

Compared to students’ perceived school-related stress in the 2020 spring and fall semesters, a slight majority of students — 50.2% (n=52) rated their stress this most recent spring semester as the most intense.

These results are in line with the responses to other questions posed in the survey, such as the 46.6% of students who reported that they “often feel socially isolated” due to social distancing (n=48). Similarly, 81.6% (n=84) reported an increase in average daily screen time over the pandemic, and 65% (n=67) reporting more trouble sleeping.

These statistics were supported by anonymous comments that respondents voluntarily shared. Several respondents directly reported that increased screen time from both online classes and social media harmed their concentration. One student reported, “I used to be so good at contributing to discussion in-person, but now I can’t concentrate for more than 10 minutes.”

Additionally, the loss of campus life and other social events has reportedly hampered some respondents’ motivation to complete schoolwork, with one commenting that “all of the enjoyable parts of college were taken away.”
CPS Director Jeffrey Ng said that over the past 10 years, anxiety, depression, relationships and academic distress were the most common issues among students seeking appointments with CPS.
Mental Health Implications
Increased screen time has been associated with getting fewer hours of sleep, which in turn can increase the risk of anxiety and mood disorders like depression and bipolar disorder. Social isolation measures, while necessary in order to stifle the pandemic, can also lead to increased rates of depression and anxiety. The result is several factors (social isolation, screen use, disrupted sleep) that can contribute to feelings of anxiety and depression.

Fordham’s Counseling and Psychological Services (CPS) Director Jeffrey Ng said that over the past 10 years, anxiety, depression, relationships and academic distress were the most common issues among students seeking appointments with CPS.

This past year, anxiety among students increased, and more students reported struggles with grief and loneliness, Ng said. Because of the amount of loss students have experienced over this past year — whether due to losing loved ones or routines and expectations — many students have undergone trauma, which he said often presents itself through anxiety.

Aside from the trauma due to loss and isolation, the contentious political climate has added stress to many college students’ lives. Especially at a mostly liberal campus such as Fordham College at Lincoln Center, the racial unrest and turmoil over the 2020 election impacted the mental health of many students.

“I don’t want to lose sight of the fact that there has been a lot of social and political tensions that have arisen in the past year, and so a lot of those have had an impact on our students,” Ng said.
CPS is still available to students who are not on campus, but many nonresidents have chosen not to use it.
Less Utilization of CPS Services
Despite the reported increases in stress from the student population, Ng has seen less use of CPS services over the last semester.

Ng believes that the under-utilization was a result of fewer people on campus and not reflective of a lack of mental health challenges. In fact, he said there have been many challenges over the past year that have created more mental health distress within the student body and general population.

CPS is still available to students who are not on campus, but many nonresidents have chosen not to use it. “I think just the simple fact that they’re (the students are) not on campus just creates some sort of distancing from the service,” Ng said.

With fewer people on campus, CPS has struggled to promote its services to the student population because the CPS staff generally receives most of its appointments from referrals and in-person communication. Switching to digital-only promotion has resulted in less “familiarity” and “receptivity” of CPS services, Ng said.

This decrease is seen across the board at other colleges and universities as well, he added.

Despite fewer students coming to CPS for mental health resources, Ng pointed out that awareness of mental health has actually become increasingly prevalent: “Overall utilization of on campus college mental health services has decreased, despite our recognizing that the mental health distress and the mental health needs are probably higher right now than they’ve ever been.”
“We encourage all of them to just continue to try to be kind and compassionate with themselves as they figure out what to make of this year.” Jeffrey Ng, director of CPS
For students who have managed to take advantage of CPS’s remote services, there are variations in the feedback for how useful they find the online services. “I would say overall, there was the recognition that it’s a less than ideal way of interacting,” Ng said, however, some students preferred remote appointments because of their convenience.

“We encourage all of them to just continue to try to be kind and compassionate with themselves as they figure out what to make of this year,” Ng said. Any students struggling with their mental health can make an appointment by going to the CPS website and calling the number provided, or by walking into one of the offices and setting up a pre-screening appointment.