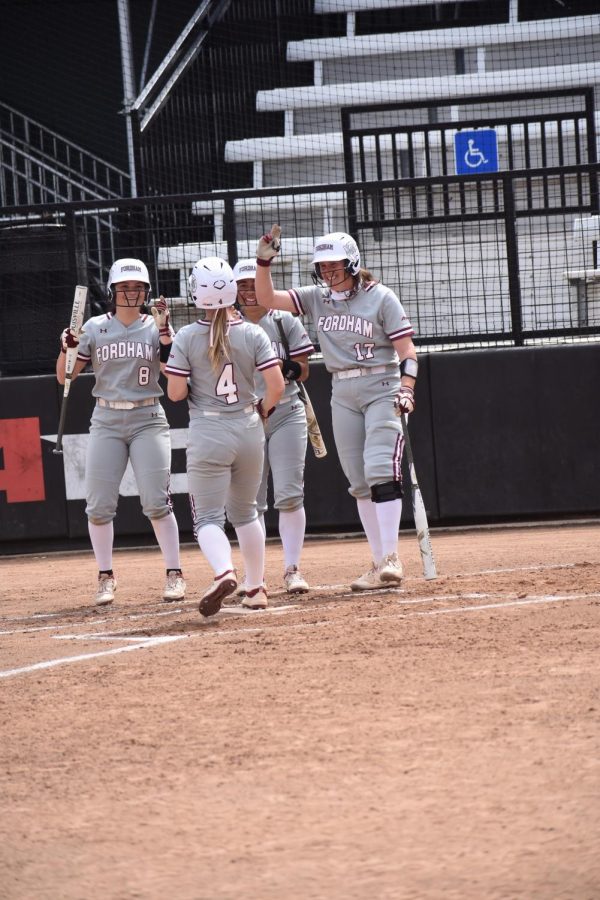 The end of the Fordham softball team's regular season came with three losses in a series of four against St. Joseph's University.

By SOPHIE PARTRIDGE-HICKS and PATRICK MOQUIN

The Fordham softball team lost three games in a four-game series against the St. Joseph’s University (SJU) Hawks last weekend. It was a surprising result for the 36-8 Rams, as they suffered their first three Atlantic 10 (A10) conference losses in a single weekend.

Fordham’s series against SJU was the final set of regular season games for both teams before the A10 Tournament and the stakes were high. With a 16-0 record entering the series, the Rams had the opportunity to take the first seed away from the 21-1 George Washington University Colonials with a clean sweep. Meanwhile, the 14-2 Hawks had the opportunity to take the second seed with a series victory.

At the outset of the first game on Friday, it appeared that both teams were on even terms with two top pitchers on the mound. Through three innings, Madie Aughinbaugh, Graduate School of Arts and Sciences ’22, and Amanda Herr, SJU ’22, kept opposing batters hitless, but in the top of the third, SJU finally broke through. The Hawks scored three runs on four hits and an error to take a 3-0 lead, one they wouldn’t relinquish.

While their opponent managed to put runs on the board, the Rams remained hapless against Herr, who pitched a complete game while allowing no runs on only three hits. In the top of the sixth, the game got out of hand as the Hawks put up seven more runs on Aughinbaugh, who had to exit early in one of her most tumultuous starts of the year. For the first time all season, Fordham lost 10-0 by mercy rule after six innings.

The teams came back to Bahoshy Field on a drizzly Saturday afternoon for the second and third games of the series.

The Rams’ star pitcher, Devon Miller, Fordham College at Rose Hill (FCRH) ’23, took the mound in the top of the first inning and gave the SJU batters a challenge with a commanding fastball and solid control. Yet the Hawks adjusted well the second time through the lineup.
Despite strong performances at the plate from left fielder Michaela Carter, FCRH ’23, and center fielder Brianna Pinto, FCRH ’21, the Rams were unable to avoid another shut-out.
The first scores came in the top of the third when Caela Abadie, SJU ’21, hit Miller’s pitch up the middle for a single, driving in two runners and pushing the Hawks ahead 2-0. Following another walk from Miller to load the bases, Head Coach Melissa Inouye put first-year pitcher Bailey Enoch, FCRH ’24, on the mound in an attempt to stop the Hawk’s advancement.

Enoch’s strong outing was short-lived as Jordan Hinkle, SJU ’22, nubbed the ball for a base hit, allowing Abadie to score. Then Payton Baxter, SJU ’23, singled with another weak hit, allowing Madison Fife, SJU ’23, to score and give SJU a 4-0 lead.

Despite strong performances at the plate from left fielder Michaela Carter, FCRH ’23, and center fielder Brianna Pinto, FCRH ’21, the Rams were unable to avoid another shut-out. The Hawks tacked on two more runs in the sixth, giving them a 6-0 victory in the second game.

With three Rams on base, the future of the game looked concerning for the Hawks, who had little room to recover.
Having lost the first two games, the Rams finally responded at the start of the third with urgency, aiming to make up ground on their A10 rival. After pitching a scoreless first frame, Anne Marie Prentiss, FCRH ’21, smoked a line drive down the third base line. The hit wreaked havoc for Taylor Marinelli, SJU ’21, at third base, who could only lunge in vain as the ball flew past her. Prentiss’s double brought home Aughinbaugh and Julia Martine, Gabelli School of Business at Rose Hill ’22, and gave Fordham an early two-run lead.

SJU attempted to bridge the gap with a solo home run by Abadie in the top of the fourth, but Fordham struck right back in the bottom of the inning with a run of their own from Pinto.

With three Rams on base, the future of the game looked concerning for the Hawks, who had little room to recover. They managed to escape the fourth without allowing another run, but Fordham continued to apply pressure on the Hawks’ defense in the fifth.

Fordham took advantage of sloppy pitching from Emily Siler, SJU ’24, in the fifth, loading the bases and scoring two runs on a walk and a hit-by-pitch. In the next at-bat, Enoch hit a double deep into left field to drive in two more runs and give the Rams a comfortable 7-1 lead.

On the mound, Prentiss controlled the game throughout, allowing one earned run in seven innings on five hits while striking out four batters. While pitching leaders Miller and Aughinbaugh struggled against the Hawks in their starts, Prentiss turned in a strong performance to give Fordham its only win of the weekend.

The fourth and final game of the series occurred on Sunday, and through three innings, the teams were tied at a run apiece. As was the case for most of the weekend, however, SJU made the necessary adjustments before Fordham could, and a competitive game became a runaway in the fourth.
Fordham only managed one win in the series — an unfortunate way to end the regular season leading up to the A10 Tournament.
The Hawks scored six runs on seven hits to jump out to a 7-1 lead. At one point in the inning, seven straight SJU batters got on base in a blowout inning that made the result of the game a foregone conclusion. The Rams allowed a run in the fifth and sixth and fell behind 9-1. Without a response on offense, the team lost by mercy rule for the second time that weekend.

Fordham only managed one win in the series — an unfortunate way to end the regular season leading up to the A10 Tournament. Despite showing success throughout the season with a 17-3 conference record, Fordham left the weekend with only one win from a series against a legitimate A10 rival.

In the first round of the A10 Tournament on Thursday, May 13, Fordham played as the third seed in a rematch against SJU, who earned the second seed with its three wins this past weekend. The first four games against the Hawks may have been bumpy for a Rams team accustomed to success, but the fifth game between the two teams may end up being the only one that matters.

UPDATE: The Fordham softball team defeated St. Joseph’s University in the first round of the A10 Tournament, 7-3. They will move on to play the University of Dayton Flyers in the A10 Championship game on Friday, May 14.