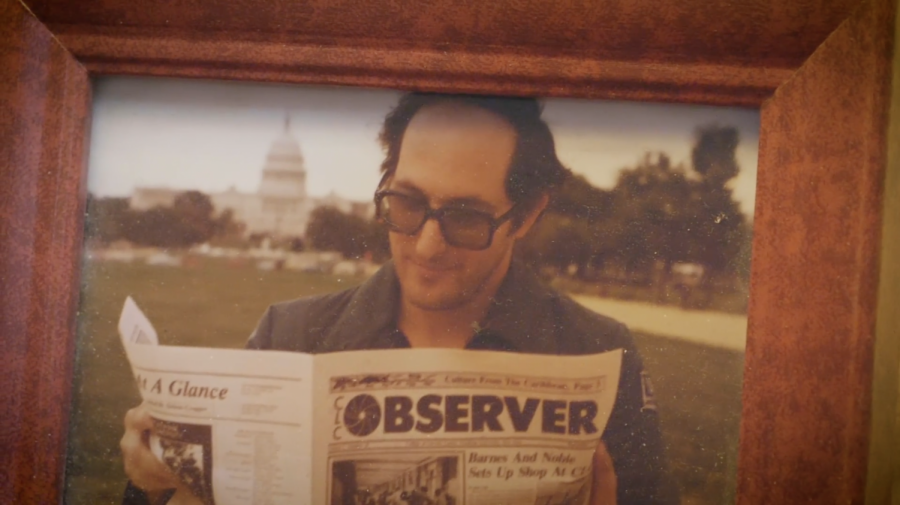 COURTESY OF THE CARCINOID CANCER FOUNDATION

Mitch Berger reading a copy of the CLC Observer in Washington, D.C., where he moved after graduating from Fordham. Berger kept his Ob- server memories close and even had a framed version of this photo in his house.

“Where’s the Money?” read the headline of the first article printed in the first issue of The CLC Observer. The story, a brilliant and biting exposé of the 1981 Student Activities Budget Committee and the United Student Government’s mishandling of student publication budgets, was written by Mitch Berger, a 1983 graduate of what was then known as the College at Lincoln Center (CLC).

Berger, a founding editor-in-chief of The Observer, renowned legal consultant in the comic book industry and beloved husband, passed away at the age of 64 from neuroendocrine cancer in November of 2019. He left in his wake countless organizations and publications that he built from the ground up.

In 1981, a group of students set out to create a newspaper at Lincoln Center that rivaled the Rose Hill paper, The Ram. Berger was “especially influential” in establishing the voice of The Observer, according to his successor, Julie Toth Power, CLC ’84. “He was looking for a paper that would interest the diverse student population,” Power said. The result was CLC’s new, hip, honest newspaper. The Observer’s early reporting reflected its founder.
“If Fordham is to remain a university that attracts and keeps the brightest, it must openly surrender its right to censor its campus publications and other modes of student expression.”Mitch Berger, CLC ’83
“He was the most argumentative person I ever met — he believed in his convictions whether they were right or wrong, but he was the kindest and gentlest person at the same time,” fellow founding editor Victoria Gioia, CLC ’83, said. While previous CLC student publications folded, The Observer flourished under Berger and his colleagues’ leadership.

“He knew when to step up,” Gioia said. “Sometimes strong voices needed to get things done. When we were shy going to administration, he had no problem.”

In his farewell column in The Observer, he took the opportunity to condemn the Fordham administration for its censorship. “If Fordham is to remain a university that attracts and keeps the brightest,” he wrote, “it must openly surrender its right to censor its campus publications and other modes of student expression.”
Comics and Cartoons
This decree foreshadowed Berger’s career. After graduating from CLC, Berger attended Antioch School of Law. He moved to Washington, D.C., and worked as an attorney to provide legal advice for the industry he loved most: comic books.

In 1991, Berger was a founding board member of the Comic Book Legal Defense Fund, a nonprofit organization whose mission was to defend the First Amendment rights of comic book creators and readers through legal action, advocacy and education. He also was the legal consultant for “Supernatural Law,” a comic strip about lawyers with monster clientele.

Berger sought out to aid underdogs and unknown comic book artists from being taken advantage of. “He was always helping people,” Berger’s wife Michiko Iwasaki said.

He was honored for his pro bono work with copyright issues for cartoonists with a lifetime pass to San Diego Comic-Con (SDCC) — the largest comic book and entertainment convention in the world.

His love extended to all graphic art. From 2010 to 2014, Berger was the producer of NPR’s opinion column “Double Take ’Toons,” where he compiled two topical political cartoons with differing views.
Loves That Last
In 1992, Berger was once again browsing through a newspaper — this time, a local free paper in D.C. — and found a singles’ ad from a woman seeking “someone who has a good sense of humor, has integrity, family-oriented, good storyteller.”
Berger and Girshman traveled around the world — they attended baseball games and scuba-dived.
This newspaper ad introduced Berger to Peggy Girshman, a journalist and editor at NPR. He was drawn to the values she displayed in her listing. They happily married.

Girshman was then diagnosed with amyloidosis, so Berger stopped his own treatment to take care of his wife. “I loved her, so you do what you have to do,” Berger said in a video for the Carcinoid Cancer Foundation about his marriage. After the diagnosis, “Peggy made up her bucket list, and we just started ticking things off,” Berger said.
“If you want to understand what eternity is, lose someone you love.”Mitch Berger
So Berger and Girshman traveled around the world — they attended baseball games and scuba-dived. Their 20 years of marriage involved celebrating “the Peg National Holiday” (Girshman’s birthday), going to rooftop bars in Hell’s Kitchen and they had a wide, vibrant social circle. In 2016, the couple adopted a dog, Bentley, from the animal shelter as their new companion.

When Girshman passed that same year, Berger said, “she made me make a few promises, and I kept or tried to keep them all.” One of those promises his wife made him keep was to not be alone. “If you want to understand what eternity is, lose someone you love,” Berger added.

With Bentley as his emotional support, Berger put himself out there — this time, on dating site eHarmony with a bio that read: “I love film, travel, reading, cooking … using my knowledge of the law to help people, scuba, photography (including underwater), graphic novels, and comic art.” His profile picture was him holding Bentley, taken by Girshman.

This picture caught the eye of Michiko Iwasaki, a professor of psychology at Loyola University Maryland.
Berger spent a long part of his life being sick, but his sickness only fueled his passion for helping people.
On their first date, they talked for five hours. “We met at a restaurant, and we closed the restaurant,” Iwasaki said. They moved to a different bar and talked until that place closed for the night as well. Berger said in the Carcinoid Cancer Foundation video that they hit it off with “a level of familiarity and intimacy and humor.”

While they were dating, one of their hobbies was trying different ramen places. One night, their ramen joint was a bust. Berger looked up at Iwasaki and said, “Over the worst bowl of ramen you and I have ever had together, I’m going to ask you to marry me.”

They married in 2017 in a garden in Hell’s Kitchen. Berger said in the video, “To find someone again, who I can give love to and get love from is just an extraordinary gift.”
Remarkable Foundations
Berger spent a long part of his life being sick, but his sickness only fueled his passion for helping people. One of Berger’s greatest legacies and nearest to him personally is the Capital Area Carcinoid/Neuroendocrine Tumour Survivors support group, which he founded in 2001.

Berger committed to meeting every month with a small group, which soon grew to a stable group of around 20 members. His mission when he led the group was to keep it patient-focused and patient-led.

“It’s so, so remarkable that he kept on doing all these things he loved and he had this rich and full meaningful life,” his niece Natalie Girshman said. A man of heart, drive and commitment, he didn’t just love his passions — his publications, comics, his support group and the loves of his life — he built them up and left them stronger.

Berger’s last printed words in The Observer read, “The Observer, only a year and half old, has been recognized as one of the best undergraduate papers in the country. That’s something to be proud of and I’m glad I had the privilege to be part of it. I’ve worked with the people who will be running the Observer next year and the only way they’re going to embarrass us is by surpassing us.”