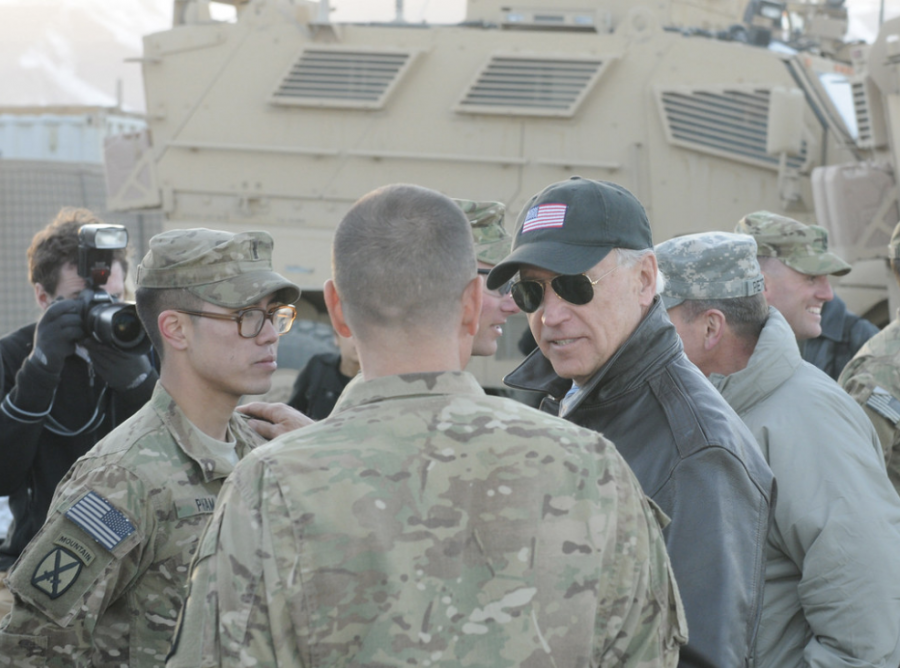 Then-Vice President Joe Biden speaks with troops at a base in Afghanistan’s Maidan Shar Wardak province in 2011.

Though I’m sure the U.S. government would like Americans to accept that jihadi extremists like al-Qaida and its subsidiaries were doomed to eventual demise after the “War on Terror,” militant groups have actually experienced growth during the failed war. Because of this, Biden’s decision to take troops out of Afghanistan may not be as consequential as some politicians claim, and the War on Terror should act as a cautionary tale against the United States’ ineffectual foreign policing.

Jihadi extremism has spread far, even beyond the reach of the “unquestioned military strength” of the U.S.

As of 2018, al-Qaida alone boasts approximately 40,000 members in their ranks across many countries in Africa, the Middle East and South Asia, which represents significant growth since their inception. The group also has more than two dozen franchises under its allegiance. However, fewer than a thousand of these members are actually in Afghanistan, possibly as a result of the United States’ strategic approach.
Lives have been lost not only because terrorism continues, but also because of the prolonged violent occupation by the U.S.
Multiple factors have led to al-Qaida’s resurrection and the spread of jihadi extremism, creating the perfect conditions for the groups to thrive outside Afghanistan. The aftermath of the Arab Spring, subsequent geographic spread into new territories and the rise of Ayman al-Zawahiri have contributed to al-Qaida’s recent strategic growth. U.S. involvement may have exacerbated some of these factors.

The true travesty of the war, however, is the collateral damage that the U.S. and the terrorists it intended to crush have inflicted on innocent civilians in the Middle East. Lives have been lost not only because terrorism continues, but also because of the prolonged violent occupation by the U.S.

In the early 2010s, a series of pro-democracy uprisings in the Middle East and North Africa shook the previously established political order in a phenomenon called the Arab Spring. Although some of the outcomes of the Arab Spring ended in steps backward for democratic values, it proved to be a leap forward for extremism. Nations that fell into chaos from the effects of the conflict were easily manipulated and persuaded to join militant forces; in countries looking for order, al-Qaida and similar groups filled the void.

“The mujahidin (a person involved in a jihad) around the world are going through a moment of elation,” the movement’s then-spokesman Anwar al-Awlaki wrote in 2011. He continued, “I wonder whether the West is aware of the upsurge of mujahidin activity in Egypt, Tunisia, Libya, Yemen, Arabia, Algeria, and Morocco.”

Around the same time in Egypt, the release of thousands of al-Qaida’s members from prisons by President Mohammed Morsi increased the size and efficiency of their fighting force. These released prisoners spread throughout surrounding countries into many of the places already experiencing turmoil from the Arab Spring.

U.S. forces had already pressured al-Qaida out of Afghanistan for a decade, so this expansion as a result of the Arab Spring was primed by America’s occupation of the original home base of the organization.

None of these new resources created by the Arab Spring or expansion into Africa could be useful, however, without proper leadership.
U.S. prioritization of this objective was more of a reactionary show of force than a solution to terrorism, as it seems foreseeable that the removal of one figure would not dismantle the entire jihadist movement.
Unintended Consequences of bin Laden’s Assassination

A critical part of the War on Terror was the assassination of Osama bin Laden, but the elimination of the leader of the global jihadi movement did little to hinder it. In hindsight, U.S. prioritization of this objective was more of a reactionary show of force than a solution to terrorism, as it seems foreseeable that the removal of one figure would not dismantle the entire jihadist movement. The introduction of bin Laden’s successor, Ayman al-Zawahiri, surely strengthened extremist groups across the globe for years to come.

Most obviously, bin Laden’s assassination bolstered the ideological legitimacy of the Jihadi cause. Martyrdom is the ultimate power move for leaders, the ultimate evidence of true dedication. As with most movements, the death of a leader only solidified the cause. However, the question did remain: Who would take over?

Unlike bin Laden, who had a relatively comfortable upbringing, al-Zawahiri was experienced in the real-world effects of extremist ideology from the age of 15, when he founded his own organization to overthrow the Egyptian government. He has been imprisoned and tortured by his enemies, and he was even once abandoned by his cause. He is educated through both academia and experience and is extremely strategic — the perfect leader and tactician.

Middle Eastern conflict specialist Bruce Hoffman writes that al-Zawahiri is “protecting the movement’s remaining senior leadership and consolidating its influence in new and existing theatres. His highest priority was to ensure that al-Qaida became impervious to a single, knockout blow of its entire senior leadership.”

A Time Bomb, Despite Years, Trillions of Dollars and US Efforts

New territories, leaders and circumstances have allowed al-Qaida to evolve into something perhaps even more dangerous than what was seen on 9/11. These new advantages, which are still developing, are creating a smarter, stronger and more menacing al-Qaida.

So although Biden’s move to retreat from Afghanistan has drawn some concern and criticism, the reality of the situation is much darker for different reasons: Jihadi terrorism is much larger than Afghanistan, and the U.S. has done little to truly restrict its influence and power. Though there is no way to predict what would have resulted without the War on Terror, it undoubtedly has resulted in trillions of dollars wasted and hundreds of thousands of lives lost, which should warrant a thorough reexamination of U.S. foreign policy.