Casting directors have an affinity for hiring adults to play teenagers 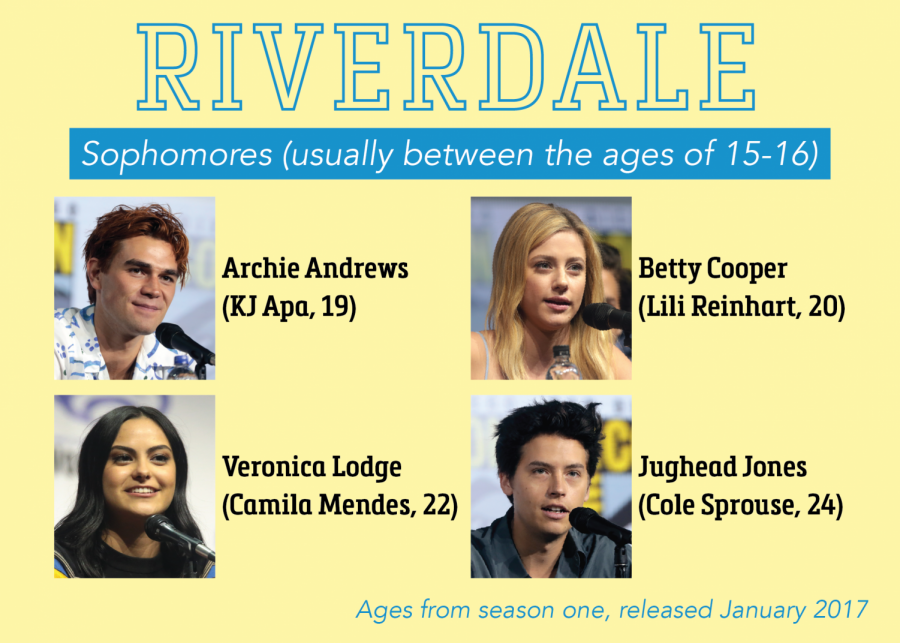 What do Cole Sprouse, the late Cory Monteith and Stockard Channing all have in common? They were all above the age of 27 when they played high school students in “Riverdale,” “Glee,” and “Grease” respectively. If you’ve ever watched a TV show or movie set in a high school, chances are you’ve noticed that the actors in the show look way too old to be there. Although many factors go into whether or not an actor is cast for a specific role, it is undeniable that casting older actors to play teenagers is far too common in the film industry and is harmful to high school students’ self-esteem.

While there are some exceptions, most people would not regard their high school years as their “peak” in life. Many look back on the four-year stint as a period of awkwardness, confusion and self-discovery. For this reason, high schools make an excellent backdrop for movies and TV shows, but rather than showing the pain and confusion of high school, studios often glamorize the experience to give viewers a sense of nostalgia for their own teenage years. The best way to do this? Take away the awkward, confused teenagers and replace them with confident, developed adults.

How is this fair to current high schoolers? Their lives and experiences are on display with little accuracy to their actual experiences. Instead of a fun glamorization of how great high school can be, studios casting actors who don’t represent this age group leave high schoolers comparing themselves to what they see on television, which is often an attractive adult pretending to understand their issues. Instead of representing the struggles of being a teenager, the media infantilizes them and forcibly holds them to a standard that they will never meet.
High schoolers are just figuring out who they are and are growing into their own skin, and sometimes, it’s not pretty to watch.
The trend of casting mature, mortgage-paying adults to play teens is far from new. In the movie “Grease,” released in 1978, the main cast played high school students who were 17-18 years old, but their actual ages ranged from 23-33 years old. Stars of the film regularly had to dye their hair to look younger. In a 2016 interview, director Randal Kleiser admitted to doing crow’s-feet tests, looking up close at an actor’s face to examine whether they had wrinkles on the sides of their eyes, during auditions to make sure none of them looked too old to play the part.

Modern media has not fared much better. Cory Monteith, the actor who played Finn Hudson on “Glee,” sadly passed away in 2013 at the age of 31, but at the time of his death, his character was only 19 years old. Additionally, “Mean Girls,” a movie hailed for its accuracy in portraying the high school experience, had a cast that was almost entirely in their early 20s playing high school students. Rachel McAdams, who played Regina George, was 26 when she filmed the movie. Actress Amy Poehler, who played George’s mother, was only 32, leaving a six-year age gap between mother and daughter.

So, why do casting directors do this? Well, for one thing, strict child labor laws can make it hard to work with actors under the age of 18. Although the exact laws often differ depending on the state and age limits, most sets working with minors need child actors to be under constant supervision, and young actors have a set maximum number of hours that they can work in a day. Also, depending on the nature of a project, stars, studios and audiences may be more comfortable knowing that a high school character acting promiscuously is not played by a minor (so don’t worry, the actors you see on “Euphoria” selling their nudes and doing ecstasy out of their lockers are all well into their 20s).

To solve these issues, a casting director would be justified in hiring an older teen to play a character that is only a year or two younger than them; however, many still decide to cast actors that obviously cannot pass for teenagers, which brings me to my main point: High school is awkward. It’s weird and gross and uncomfortable. Even on your best days, you really don’t know what you’re doing. High schoolers are just figuring out who they are and are growing into their own skin, and sometimes, it’s not pretty to watch. High school is not accurately represented by confident, wealthy, attractive adults whose awkward teenage years were over a decade ago.

Movie studios want to sell an idealized picture of high school, which is not necessarily an accurate one. This makes it even harder for modern high school students to feel comfortable in their own skin. It is undeniable that media and television have some of the biggest influences on our lives.

When a 16-year-old struggling with their self-image turns to their favorite show to look for relatable characters their age, all they find are 25-year-olds with a distinct lack of acne; straight, white teeth without braces; a perfect signature hairstyle that they settled into years ago; and, of course, the help of a full hair and makeup team. Upon seeing these perfect faces, teenagers are only in for more issues with self-identity.

By setting an unachievable standard for teenagers, an already insecure demographic, studios are effectively telling adolescents that they aren’t good enough. This has left teens in the uncomfortable position of comparing themselves to adults who put their own issues of self-esteem and personal growth to bed while their teenage viewers were still in diapers.

And for those of us who have already survived high school, shouldn’t media about high school be accurate to the experience? Television will always glamorize, but how can studios continue to get away with selling an image that every American knows is not accurate?

Viewers awaiting, reminiscing on or currently surviving high school deserve an accurate portrayal of the experience, and casting directors are not delivering. Until more roles of high-school-aged characters are filled by relatively high-school-aged actors, this genre of media will continue to set an unreachable standard for high school students and serve as a cruel reminder of what they cannot attain.