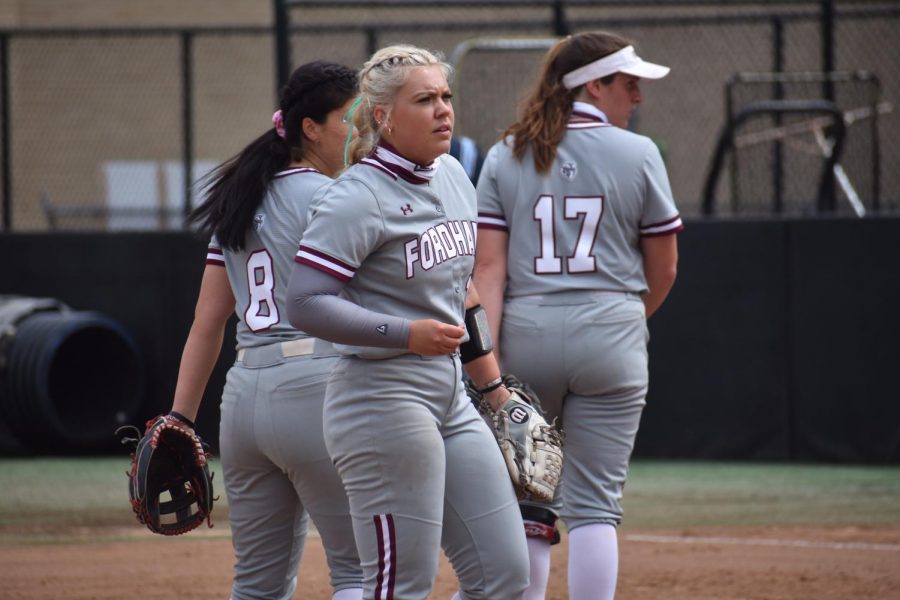 The Fordham softball team claimed victory in both games of a doubleheader against the St. Bonaventure University Bonnies.

The Fordham softball team defeated the St. Bonaventure University (SBU) Bonnies in both games of a non-conference doubleheader on Saturday, April 10. After a 4-2 victory in the first game, the Rams scored eight runs early in the second game to win by mercy rule. The team has now won 20 straight games and holds a 23-3 record in 2021, while the Bonnies remain winless after 16 games.

Entering the doubleheader, it didn’t require intense arithmetic to identify Fordham as the superior team. Before Saturday, the Rams were riding an 18-game winning streak dating back to March 10, while the Bonnies hadn’t managed to win a game all season. Despite this massive gap in success, however, St. Bonaventure sparred well with Fordham at certain points, particularly toward the end of the first game.
“We did a good job setting the tone right away for power in the first inning of game one. Devon and Amanda did a good job mixing pitches against a free swinging team” Melissa Inouye, Fordham softball head coach
To begin the doubleheader, the Rams took an early 3-0 lead in the first inning on back-to-back home runs from Julia Martine, Gabelli School of Business at Rose Hill (GSBRH) ’22, and Rachel Hubertus, Fordham College at Rose Hill (FCRH) ’22. The team scored another run in the third to take a four-run lead, which went unchallenged until the seventh inning.

On the mound, Devon Miller, FCRH ’23, overwhelmed St. Bonaventure batters for most of the day, recording 15 strikeouts while allowing just two hits. With two outs in the top of the seventh inning, though, Miller lost her shutout on a single pitch, as Madison Stewart, SBU ’23, hit a two-run home run to cut Fordham’s lead in half, 4-2.

As a successful softball team, the Rams have had their fair share of blowout wins this season, but they have won in close games as well, posting an 8-1 record in games decided by three runs or fewer. The eighth of these wins came on Saturday, as Miller maintained composure and struck out her 15th and final batter to snuff out the Bonnies’ comeback attempt.

“We did a good job setting the tone right away for power in the first inning of game one. Devon and Amanda did a good job mixing pitches against a free swinging team,” Inouye said.

While the first game was a demonstration of Fordham’s elite pitching and perseverance in tight situations, the second was a showcase for the team’s explosiveness. The Rams scored all of their runs for the entire game in the second inning, but a single rally was enough to end the game early by mercy rule.
“Offensively, we hit a lot of balls hard, put pressure on their defense, and strung rallies together.” Melissa Inouye
With three women on base, Anne Marie Prentiss, FCRH ’21, hit a triple to drive in Fordham’s first three runs, and Michaela Carter, FCRH ’23, drove her in with a single in the next at-bat. Madie Aughinbaugh, Graduate School of Arts and Sciences ’22, sustained the rally with a double later in the inning, driving in two more runs.

After allowing six runs in a single inning, St. Bonaventure coaches elected to change pitchers. It didn’t matter to Sarah Taffet, GSBRH ’22, who followed Aughinbaugh’s double with a two-run home run to give Fordham an 8-0 lead heading into the third.

After helping her team establish a massive lead at the plate, Aughinbaugh returned to the mound and mowed down St. Bonaventure batters. The captain struck out six batters without allowing a run, and after five innings, Fordham’s eight-run lead was enough to end the game.
For now, the team must wait for new opponents to test its 20-game winning streak, and with less than a month remaining in the 2021 season, the A10 Championship postseason is already on the horizon.
Inouye credited the team’s second win to stellar offensive play and Aughinbaugh’s presence on the mound.

“Dominant performance by Augie in game two, she had really good command,” Inouye said. “Offensively, we hit a lot of balls hard, put pressure on their defense, and strung rallies together.”

As of this article’s publication, the Rams’ next five games have been postponed due to COVID-19-related incidents within the softball programs at the University of Connecticut and the University of Rhode Island. With an 8-0 record in the Atlantic 10 (A10) conference and a wealth of talent at every position, it seems that lack of competition is the only possible way to stop Fordham at this point in the season.

The Rams played Army on Saturday, April 17, in a nonconference four-game weekend set, losing the first game 4-3 but winning the second. This ended Fordham’s 20-game winning streak, but the team has a month left in the 2021 season with the A10 Championship postseason on the horizon.