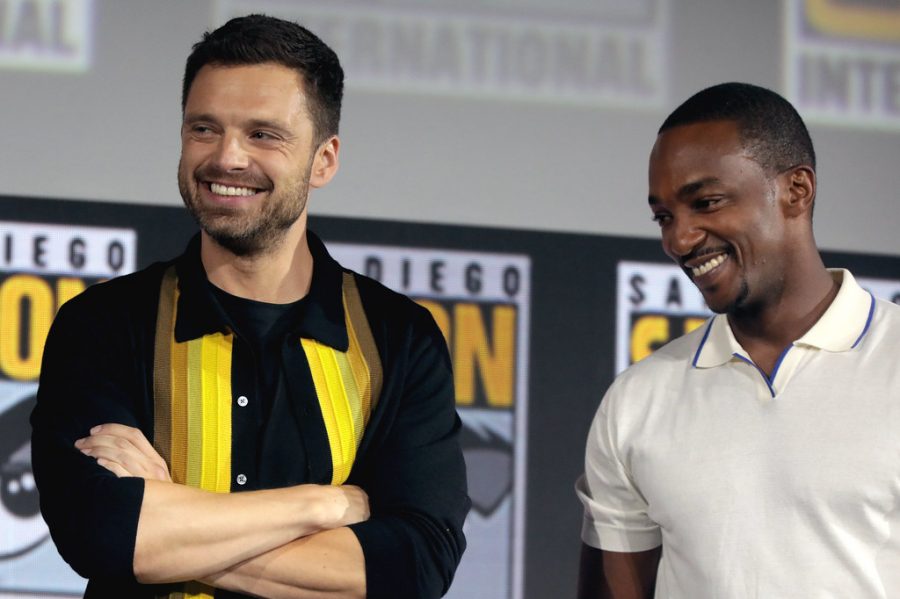 Sebastian Stan (left) and Anthony Mackie show off the fullness of their acting range after being supporting characters in the Marvel movies that preceded "The Falcon and the Winter Soldier."

Warning: This article contains major spoilers from Episode One of “The Falcon and the Winter Soldier” and previous Marvel films.

After finishing “WandaVision” two weeks ago, I was eager to see where the Marvel Cinematic Universe (MCU) would go next. Luckily, I didn’t have to wait too long to find out. The first episode of “The Falcon and the Winter Soldier” was released on March 19, and, as expected, it was spectacular in both production and storytelling.

The series starts with Sam Wilson, known as the Falcon, being sent on a rescue mission by the U.S. Air Force. During this rescue mission, he encounters the supervillain Batroc the Leaper, who last appeared in “Captain America: The Winter Soldier” (2014). Throughout the episode, we see Sam struggle to balance his personal life and superhero career. He is unable to help his sister, Sarah, and nephews, Cass and AJ, with their family business due to dealing with superhero responsibilities. After Steve Rogers gives Sam the opportunity to be the next Captain America, Sam believes that he is not capable of taking the mantle.

While this episode does not have much action except in the opening scene, there is plenty of amazing character development. In particular, I found Bucky’s character to be very compelling — he is just a person who wants to find peace after years of being a mind-controlled assassin and threat to the government. When he is given the opportunity to start a new life and find happiness, he believes that the only way to deal with his guilt is by making amends with the people he hurt physically or emotionally.

I also found Sam’s character development very interesting. He is a person who wants to help his loved ones but realizes that being an Avenger is not enough, especially when facing financial issues.

This episode focuses on the grounded side of the MCU, which I thought perfectly showed the versatility of the franchise. I was always curious about how society functions in the MCU, especially after “Avengers: Endgame” (2019), and after watching just the first episode of this show, I found my questions answered. Rather than the first episode focusing on action, the creators take their time fleshing out the characters and answering the question: What do superheroes do in their spare time? For example, Sam offers to help his sister and nephews bring food to a soup kitchen and deal with finances at the bank. Bucky gets set up on a date by a man named Yori.
Instead of showing the viewer plenty of action sequences they might expect from the MCU, the creators take their time giving more depth to the characters and learning why they want to do good for others.
The cinematography of the show is outstanding and replicates the quality of previous Marvel films. The use of constant close-ups and lighting to represent the tone of the scenes immerses viewers in the narrative. When Bucky attends his therapy session, the camera is mainly focused on his eyes to represent the stress he constantly deals with. When he visits Yori to pay him back for lunch, the hallway windows shine a blue light to represent the guilt Bucky feels after killing Yori’s son. The use of shaky camera movements in these scenes also adds to the realism the creators want to bring to the show.

So far, the first episode of “The Falcon and the Winter Soldier” is a great start to the series. It returns to the grounded side of the franchise and shows that the world is not always under constant attack from extraterrestrial, technological or supernatural forces. Instead of showing the viewer plenty of action sequences they might expect from the MCU, the creators take their time giving more depth to the characters and learning why they want to do good for others.

The episode leaves viewers on a cliffhanger, encouraging them to make theories about the next episode and beyond. One of the theories in the credits may hint at the introduction of the supervillain Power Broker and the fictional island Madripoor. The new Captain America, played by Wyatt Russell, is likely to have a huge impact on the rest of the show.

Since it is uncertain how the show will end, viewers are left wondering about the future of Captain America’s legacy in a post-“Endgame” world.