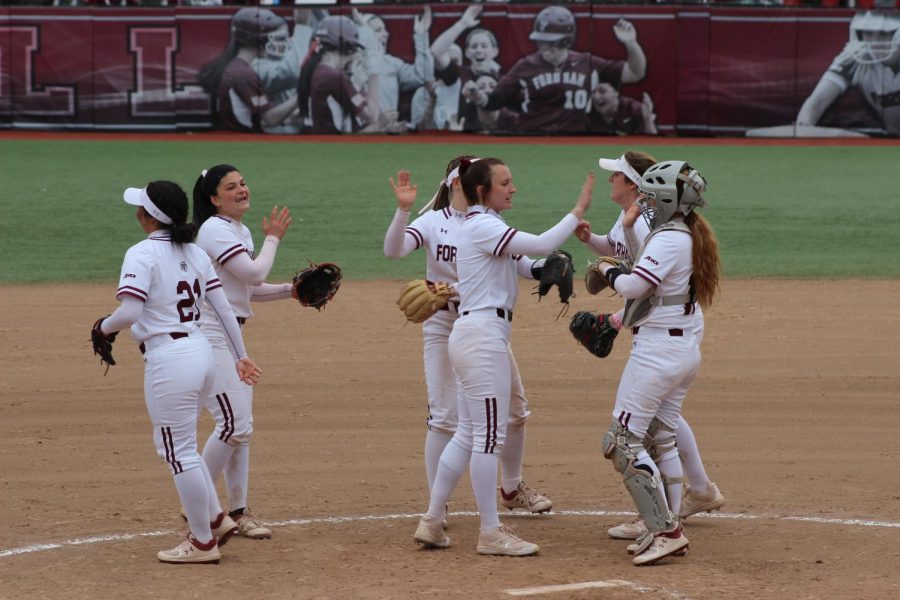 Fordham softball is prepared for conference play following an 11-3 start to the season.

Fordham softball nabbed its eighth straight victory on Wednesday against the St. John’s University Red Storm in Queens by a score of 8-4. The game was called after five innings due to rain, but not before Fordham sealed the game for good. With their latest win, the Rams improved to 11-3 on the season heading into Atlantic 10 (A10) conference play on Friday, March 26.

Fordham opened the scoring in the top of the second inning. Catcher Aubree Barney, Fordham College at Rose Hill (FCRH) ’21, and designated hitter Bailey Enoch, FCRH ’24, both drew walks. After left fielder Michaela Carter, FCRH ’23, laced a single into left and loaded the bases, centerfielder Brianna Pinto, Gabelli School of Business at Rose Hill (GSBRH) ’21, drew another walk to put the Rams on the board.

The Rams struck again in a major way in the top of the third. Second baseman Julia Martine, GSBRH ’22, walked on five pitches to start the frame. After a pitching change by St. John’s, Martine stole second. The fleet-footed Martine scored on a single off the bat of first baseman Rachel Hubertus, FCRH ’21.

Fordham did not stop there. After Hubertus advanced to second on a wild pitch, third baseman Bella Ayala, FCRH ’24, roped a double to left-center, driving in Hubertus and putting Fordham up 3-0. In the next plate appearance, Barney worked the count to 3-2 and drew another walk. Following a lineout to third by Enoch, Carter was hit by a pitch to load the bases for Pinto.

Pinto has been the Rams’ hottest hitter this year, hitting for a torrid .436 average in 14 games. She is one of the main reasons for Fordham’s success of late, rounding out the powerful Rams lineup from the ninth spot. Pinto continued to impress in her at-bat in the top of the third, lining a two-run single to give Fordham a five-run advantage. Carter later scored on a passed ball for the final run of the inning to make it 6-0. The Rams’ five-run third inning gave them the momentum they needed and a lead they would not lose for the rest of the game.
The Rams were able to take full advantage of St. John’s pitching struggles, scoring eight runs on four timely hits.
The Red Storm finally got on the board in the bottom of the third. McGrath allowed a five-pitch walk to kick off the inning but responded by inducing a foul-out to the first base side after a seven-pitch battle. An error by shortstop Sarah Taffet, GSBRH ’22, put another runner on base. McGrath gave up an infield single, cutting Fordham’s lead to five, but she responded to this adversity by striking out the next Red Storm batter. Though she surrendered another walk to load the bases, McGrath was again unfazed. She quickly forced a flyout to left field to ensure no further damage.

Five walks and one wild pitch by St. John’s helped the Rams score two more runs in the top of the fifth, giving them an 8-1 lead going into the bottom of the fifth. Officials convened and agreed that St. John’s would have one more chance to respond, with the rain falling harder with each passing minute.

These slippery conditions proved to be a late issue for Fordham’s pitching staff. After McGrath surrendered two walks to begin the frame, manager Melissa Inouye elected to bring in Enoch to finish the game. Enoch gave up a four-pitch walk to load the bases. With St. John’s threatening once again, she induced a fielder’s choice to second base that scored a run but also gave the Red Storm its second run of the game.

Following a wild pitch that put runners on second and third, Enoch gave up a double that cut Fordham’s lead to four. She responded by striking the next batter out on three pitches. After one more walk, Enoch finally got out of the inning and ended the game with a groundout to second.

Walks were plentiful at Red Storm Field in Jamaica, Queens, with a whopping 18 free passes given between the two teams. The St. John’s team suffered especially from its lack of control, surrendering 12 of the 18 total walks. The Rams were able to take full advantage of St. John’s pitching struggles, scoring eight runs on four timely hits.

Fordham will travel to Amherst, Massachusetts, this weekend to compete in a four-game series against the University of Massachusetts (UMass). The Rams enter the series with more experience and momentum, as UMass has only played four games and won two so far. Fordham will look to capitalize on this advantage and add to its winning streak in the early days of A10 conference play.