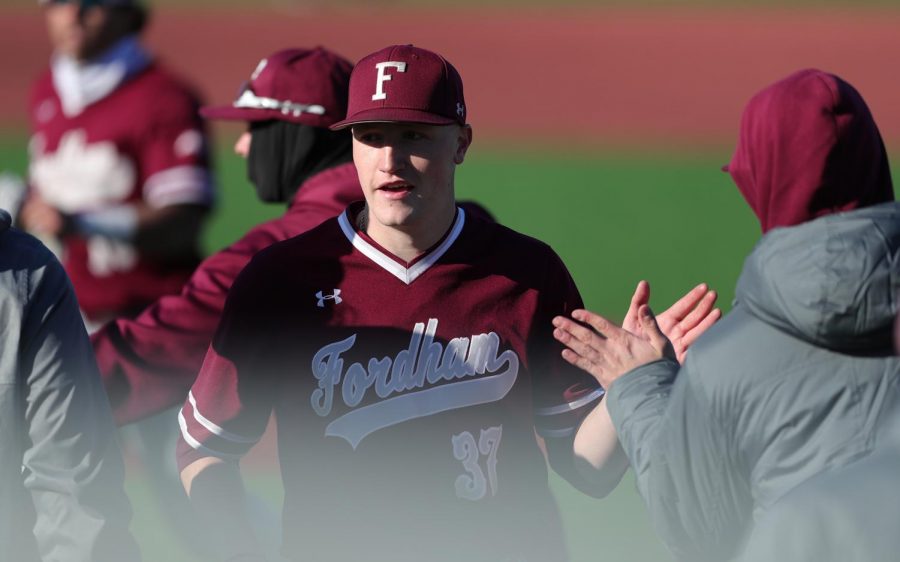 By PATRICK MOQUIN and ADAM SOUTH

The Fordham baseball team split a four-game series with the St. John’s University (SJU) Red Storm this past weekend, winning two games in extra innings in the process. In the face of their toughest opponent yet this season, the Rams remained resolute in a highly competitive series.

There were many similarities between Fordham and St. John’s entering their series. The New York rivals started their seasons with long undefeated streaks, as the Red Storm won their first seven games while the Rams won their first six.

Matt Mikulski, Fordham College at Rose Hill (FCRH) ’21, took the mound for the Rams against Nick Mondack, SJU ’22, and both pitchers shone in their third and fourth starts of the season, respectively. Both pitchers allowed one run in seven innings of work, though Mikulski had the better day, striking out 13 batters while only allowing three hits.

If not for a solo home run by Mitchell Henshaw, SJU ’21, in the bottom of the fifth inning, Mikulski would have exited the game with the lead. However, the score was tied 1-1 in the eighth as both starting pitchers made way for their teams’ bullpens.

In the bottom of the eighth, Declan Lavelle, FCRH ’24, took the mound in only his second appearance of the year. The first-year struggled against the Red Storm and allowed three runs on three hits, a walk and a hit-by-pitch. Despite Mikulski’s massive effort, the Rams failed to score in the top of the ninth and lost the first game of the series, 4-1.

After their game on Friday, the Rams and Red Storm traveled 14 miles to the Bronx to face off in a Saturday doubleheader at Jack Coffey Field. After being largely shut down by superior pitching the day before, both offenses were more productive on Saturday.

Fordham struck first when Trey Maeker, FCRH ’24, led off the bottom of the third with a solo home run. St. John’s responded immediately with three runs of its own in the top of the fourth, but Fordham fought back, scoring two later in the inning to tie the game, 3-3.

Neither team capitalized in the fifth despite getting runners on base, but St. John’s went on another rally in the top of the sixth, scoring two more runs on back-to-back doubles off relief pitcher Gabe Karslo, Gabelli School of Business at Rose Hill (GSBRH) ’22.

With two outs in the bottom of the sixth, the Rams responded once more, loading the bases for C.J. Vazquez, GSBRH ’21. The senior has cooled down precipitously since a very hot start to the season, but his clutch streak was on display again as he roped a double down the left field line to drive in all three runners and give the Rams a 6-5 lead.

Both bullpens performed very well in extras, limiting opportunities for both teams to take the second game. Finally, in the bottom of the 13th, Vazquez hit a ground ball that drove in pinch hitter Richard Grund, GSBRH ’22, to give Fordham the 7-6 victory.

Because the second game was extended by extras, the third game was shortened to seven innings. Both teams scored two runs early, and in a series that featured quality pitching through two games, neither starting pitcher in the third lasted more than an inning.

Despite an eventful beginning, the Rams and Red Storm were held down in the third and fourth, until the relief pitchers began to pitch sloppily in the fifth, resulting in a run for each team. In the top of the sixth, Jake Lazarro, SJU ’24, walked, stole second and advanced to third on a passed ball. He scored on what would become a game-winning single, as St. John’s preserved its 4-3 lead in the final frame.

After dropping two of the last three against St. John’s, Fordham looked to split the series on Sunday. The Rams started Brooks Ey, FCRH ’24, who was looking to continue his strong start to the season. As for St. John’s, Brian Hendry, SJU ’23, got the call to start for the Red Storm.

Hendry made his fourth start of the season as he sought to rebound after a tough initial inning in his prior outing against Western Carolina. Both pitchers gave up leadoff hits in the first inning, but Ey was able to settle down and get through the inning unscathed.
After taking care of business against relatively soft opponents, the Rams’ performances against the Red Storm this weekend were very promising.
In the second inning, the Rams were able to piece together a few hits. Will Findlay, GSBRH ’22, led off the inning with a single, followed by another hit from Maeker. After a productive out to move the runners up, Jack Harnisch, GSBRH ’22, drove in two runs with a single to left field, putting Fordham ahead 2-0.

Ey pitched solidly through six and one-third innings, keeping out of trouble despite several errors in the field. He gave up an unearned run in the third but held St. John’s scoreless until the seventh. The Red Storm led off with a leadoff double, but after a throwing error on a pickoff attempt by Ey, the runner advanced to third with one out. That was followed by a walk and another error, which tied the game at two.

That marked the end of Ey’s night, and Ben Kovel, GSBRH ’23, entered in relief, walking two more batters and giving up a fielder’s choice. At the end of the inning, St. John’s had a 4-2 lead.

Fordham lost their early lead, but after Nick Labella, FCRH ’21, was hit by a pitch and Casey Brown, FCRH ’21, singled, the Rams were back in business. A groundout from Maeker followed by a double from Andy Semo, GSBRH ’22, tied the game, 4-4. Then Harnisch singled to drive in another run to make the score 5-4.

Fordham scored again in the top of the ninth to extend their lead to 6-4, but St. John’s was able to score two runs in the bottom of the ninth on a one-out single. This time, however, the Rams were able to take back momentum quickly, scoring a run on a sacrifice bunt in the 10th to take the lead 7-6. St. John’s failed to respond in the bottom of the inning, giving Fordham a win to save the series against a highly touted Red Storm team.

After taking care of business against relatively soft opponents, the Rams’ performances against the Red Storm this weekend were very promising. They competed in all four games and took two of them in gritty fashion. They had the pitching and hitting to compete with a very highly touted team in the Big East conference, and as they creep ever closer to Atlantic 10 conference play in April, it appears that they’ll be coming prepared.