The Vigil of Sarah Everard

Remembrance as a Means of Expression 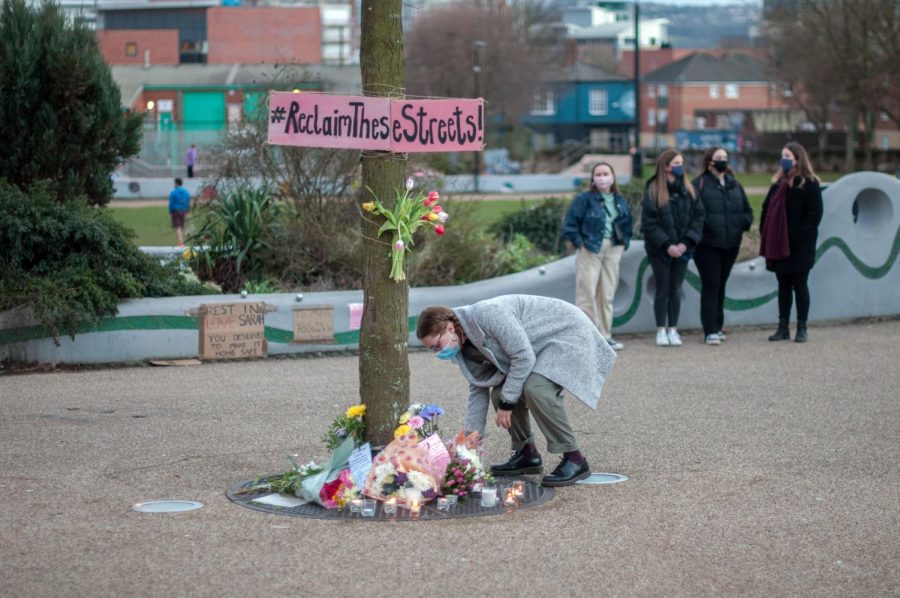 Flowers are laid at a memorial to Sarah Everard in Sheffield. The vigil for Sarah Everard was meant to draw attention to ongoing concerns about mistreatment of, and violence against, women in the U.K.

A disturbing show of force by police at a vigil in London has caused an enormous public outpouring of shock and anger throughout the U.K. This past Saturday, hundreds of people congregated in a park to honor the life of Sarah Everard, 33, who was kidnapped and allegedly killed by an active police officer. Even though the vigil was peaceful, NBC News noted that “police officers grabbed several women in the crowd, pulling them away and handcuffing them.”

Public protests are currently banned in the United Kingdom due to the country’s lockdown restrictions. England in particular was under a full national lockdown from early January until March 8 due to a rapid surge in infection rates, driven by the more contagious coronavirus variant originating in the U.K. that threatened to overwhelm the National Health Service. While schools have now just reopened, most restrictions are still in place. People are only permitted to meet with one other person outside their household, outdoors in a public space.

It seems that the Metropolitan Police felt they needed to break up the vigil due to the U.K.’s strict restrictions on public gatherings and activities in light of the pandemic. While COVID-19 remains a grave threat to the health and welfare of society, it is still unacceptable in any democracy for a peaceful vigil to be met with aggressive force.
The genuine feelings of shock and sadness felt by the vigil attendees express deep concern about the ingrained sexism in society and the lack of respect for women.
The vigil for Sarah Everard was meant to draw attention to ongoing concerns about mistreatment of, and violence against, women in the U.K.

By responding to a vigil with an aggressive manhandling of attendees, the Metropolitan Police facilitated the exact same cycle of aggression and systemic patriarchy that attendees at the vigil wanted to voice disapproval of in public. The hypocrisy of the police response to the vigil seemed clear because a week earlier, hundreds of Rangers Football Club fans in Glasgow demonstrated publicly with flares and fireworks in support of the team despite lockdown rules. Police did not aggressively disperse the football fans.

The intersection between freedom of expression and public health in this treacherous moment can certainly feel hazy at times. There are clearly public health concerns with a large public demonstration during a pandemic, but being outdoors poses a low risk of transmission of COVID-19. Additionally, attendees at the vigil were wearing masks.

In the summer of 2020, large nationwide protests in response to the killing of George Floyd were held across the United States. These demonstrations were outside and participants were wearing masks. There was not a clear correlation between these protests and spikes in COVID-19 cases in the cities in which they were held.

As a result, while there is some risk of concerns about COVID-19 at an outdoor vigil, these concerns do not necessarily rise to the level of an imminent concern to public health and safety at large. Every attempt should have been made to ensure that the response to such a gathering was peaceful.

The genuine feelings of shock and sadness felt by the vigil attendees express deep concern about the ingrained sexism in society and the lack of respect for women. We owe it to those oppressed to understand that peaceful demonstrations warrant a peaceful response. By understanding how remembrance and grief can serve as a form of expression, we can hopefully create a more inclusive and empathetic society for all of us in the years to come.