Fordham Baseball Takes Two Out of Three Against Fairleigh Dickinson 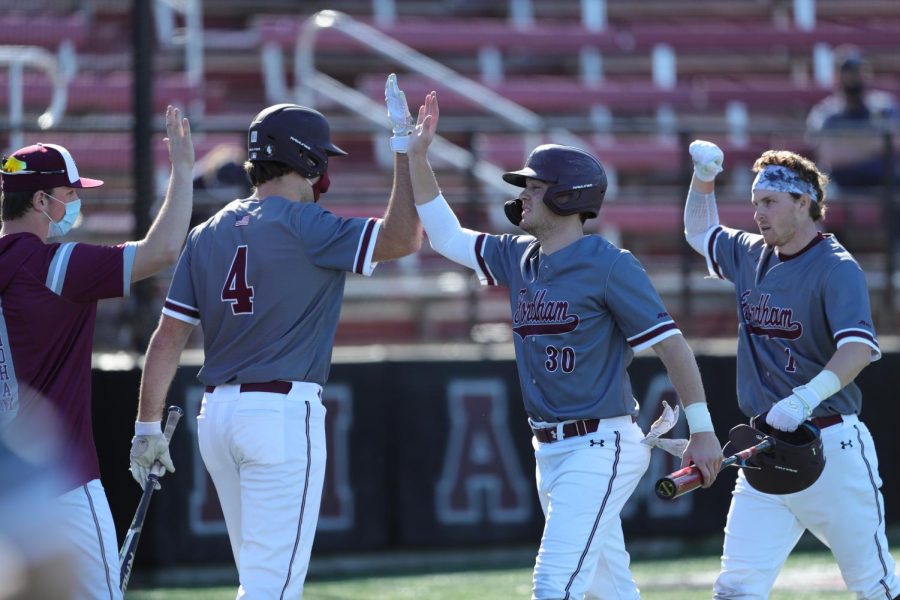 By PATRICK MOQUIN and CHRISTOPHER MURRAY

The Fordham baseball team took two out of three games in its series against the Fairleigh Dickinson University (FDU) Knights this weekend. After winning handily on Friday, March 12, the Rams suffered their first loss of the season in a 16-inning game on Saturday but recovered well on Sunday to improve to 7-1 on the season.

Entering the game, it appeared that the Rams had a distinct advantage. Fordham began the season hot on the weekend of March 6, when the team swept the New Jersey Institute of Technology in three straight games. During the week, the Rams improved to 5-0 with victories over Stony Brook University and Sacred Heart University. FDU, on the other hand, entered the series having played one game, a 12-0 defeat to Long Island University.

Much of the Rams’ early success this season has been tied to a very impressive pitching staff, which was on full display in their first game as Matt Mikulski, Fordham College at Rose Hill (FCRH) ’21, took the mound for the Friday matinee. Despite showing shaky control at times, Mikulski dominated the Fairleigh Dickinson bats to the tune of seven strikeouts and no hits allowed through five innings pitched.

His counterpart, pitcher Chris Quijano, FDU ’21, was not so lucky. After a perfect first inning, the Rams found success in the bottom of the second. Fordham right fielder Colton Snelling, Gabelli School of Business at Rose Hill (GSBRH) ’21, found himself with the bases loaded and rolled over a dribbler to Quijano.

Quijano picked the ball up indecisively before finally deciding to throw it home. The ball sailed over his catcher’s head, and two runs would score on the error. Left fielder Jake Guercio, GSBRH ’22, cleared the bases with a deep single to the right center field gap, giving the Rams a 4-0 lead after two innings.

Fordham would continue to thrive while Fairleigh Dickinson struggled. Declan Lavelle, FCRH ’24, relieved Mikulski to start the sixth inning and found success, allowing no runs over four innings, notching seven strikeouts in that span. The Knights earned their sole hit in the top of the eighth, a liner that barely evaded the grasp of Guercio in left field.

The Rams would go on to win 9-0, a dominant performance that set the stage for Saturday’s matchup between the two teams. That game, however, proved to be one of high attrition that required prolonged efforts from both teams.

The second contest started slowly, as both starting pitchers shut down opposing batters. Cory Wall, FCRH ’22, and James Donlon, FDU ’21, threw three scoreless innings each, with Wall striking out three batters while only allowing one hit.

In the fourth inning, Guercio led off with a single. He quickly advanced on the base paths, making his way to second on a wild pitch and tagging up on a foul ball to take third. Donlon began to show fatigue in his fourth inning of work and threw another wild pitch that rolled to the backstop. Guercio scored easily to give Fordham a 1-0 lead, and in the bottom of the sixth inning, he scored again on a sacrifice fly from Jason Coules, FCRH ’22, for Fordham’s second run of the game.

The Knights applied pressure again in the top of the seventh, putting runners on second and third with two outs. TJ Werner, FDU ’24, hit a single to center field to drive in both runners and tie the game, 2-2.

The game was still tied in the bottom of the ninth, and when Fordham failed to convert with a runner on third base, the game went to extra innings. The Rams had runners in scoring position again in the 10th and 11th innings but failed to score each time.

Jack Popolizio, FCRH ’23, and Joseph Quintal, GSBRH ’21, pitched brilliantly in six scoreless innings to keep Fordham in contention. But in seven extra innings, Fordham batters stranded nine runners on base and seemed incapable of driving in the winning run.

In the top of the 16th, the Rams were finally punished for keeping the Knights in the game. Ben Kovel, GSBRH ’23, took the mound and quickly got the first two outs, but FDU rallied with two consecutive base hits to put runners on first and second.

In the next at-bat, Brad Levinson, FDU ’21, cleared the bases with a triple to put the Knights ahead 4-2. Fordham was unable to respond in the bottom of the inning and suffered its first defeat of the season in brutal fashion.
Their one defeat was arduous and avoidable, but they recovered well to take the series in their next game.
If a team were to lose a baseball game, the way the Rams lost their Saturday matchup is one of the worst imaginable. They exhausted their bullpen, squandered multiple opportunities to win and had to play the same opponent the next day — but the team was not so easily disheartened and returned strong on Sunday.

After seven innings, the Rams found themselves in a familiar position, tied 2-2 with the Knights. Brooks Ey, FCRH ’24, continued to impress on the mound in his second start, allowing four hits in seven innings of work, but this game was going to be decided by Fordham’s ability to score late.

In the top of the eighth, Coules got on base with a walk and immediately stole second. On the next at-bat, Coules tagged up to take third on a sacrifice fly. Nick Labella, FCRH ’21, hit a base hit to drive in Coules and give Fordham the lead.

Coules’ run was the first of a big two-out rally for Fordham, in which the Rams scored four runs on three hits to take a commanding 6-2 lead. Alex Henderson, GSBRH ’23, shut down the Knights in the ninth to give Fordham its second win in the series and seventh of the season.

The Rams are no longer an undefeated baseball team, though that record was never going to last the duration of the season anyway. Their one defeat was arduous and avoidable, but they recovered well to take the series in their next game. Fordham is currently poised to make a run in the Atlantic 10 conference in the 2021 season, and preseason games like these give the team time to learn and develop. Based on the team’s early performances, there may be a lot to look forward to as spring approaches.