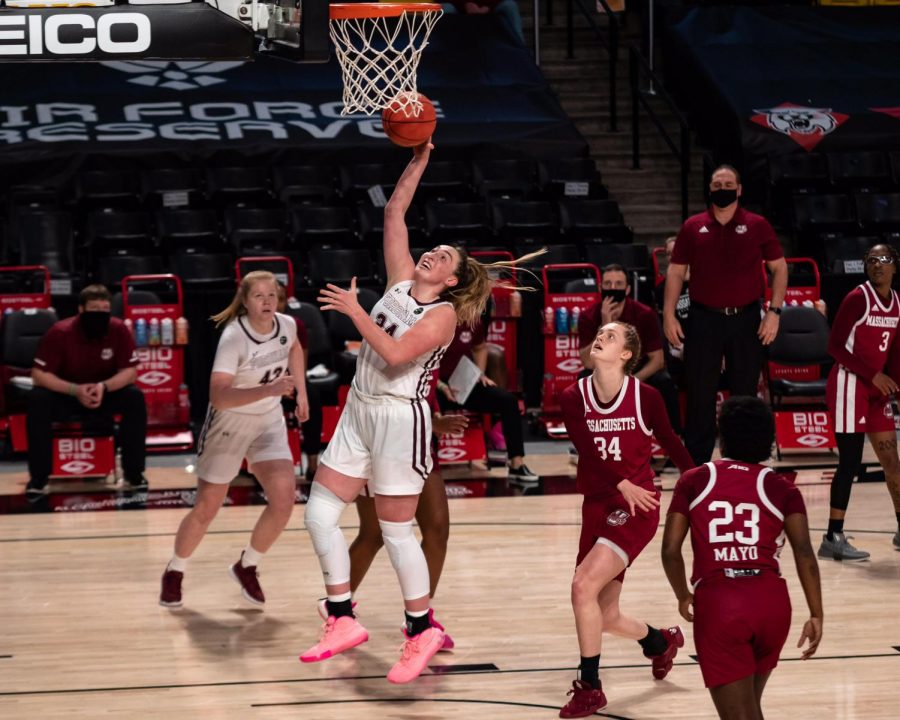 Kaitlyn Downey, GSBRH '22, put up the game's first points by making two three-pointers in a row.

The Fordham women’s basketball team lost to the University of Massachusetts (UMass) Minutewomen on Friday, March 12, in the Atlantic 10 (A10) Tournament quarterfinal, 80-70. The Rams entered the tournament as the 2-seed with the hope of securing their third conference championship, but an upset defeat in their first game ended their season prematurely.

In addition to sloppy defensive play, poor shooting and a high turnover rate, the game ended on a particularly sour note when Anna DeWolfe, Fordham College at Rose Hill (FCRH) ’23, and Kendell Heremaia, FCRH ’21, ran into one another headfirst in an attempt to foul a UMass player. Both players had to exit the game, and Head Coach Stephanie Gaitley reported that Heremaia required stitches, while DeWolfe was taken to a local hospital as a precaution for further examinations. Neither player is expected to suffer long-term injuries.

Before partaking in one of their roughest outings of the season, the Rams knew that UMass would be more difficult than its 7-seeding suggested, as the Minutewomen were the last team to defeat the Rams by a 61-56 score on Jan. 10. The Rams secured a nine-game winning streak and runner-up finish in the A10 standings after that loss, but entering the conference tournament, they were dealing with adversity beyond their control.
After nearly three weeks off the court, the team only had one game to prepare for the A10 Tournament.
The team’s troubles began on Sunday, Feb. 14, when University President Rev. Joseph M. McShane, S.J., announced that the Rose Hill campus would undergo a two-week pause in response to a spike in COVID-19 cases on campus. To conform with New York state guidelines, all Fordham athletic programs were temporarily shut down.

For women’s basketball, the pause led to the cancellation of the remainder of the team’s A10 conference schedule. After nearly three weeks off the court, the team only had one game to prepare for the A10 Tournament, a nonconference game on March 4 against George Washington University.

Like Fordham, UMass also had to cancel five games in February due to COVID-19-related incidents, but the team’s hiatus ended earlier. On Feb. 26, the Minutewomen won their final two conference games of the season before traveling to Virginia Commonwealth University, the host of this year’s A10 Tournament, to defeat 10-seed Saint Joseph’s University in the second round to advance to the A10 quarterfinals.

The Rams earned their 2-seed but were entering the postseason cold against a hot opponent that had already defeated them earlier in the season. With only seven eligible players available for the quarterfinal game, UMass had its own issues as well. The two teams were more evenly matched than their seeding would suggest, a notion that was evident from the tip-off at the Siegel Center in Richmond, Virginia.

Fordham’s stars were on display early in the first quarter, as DeWolfe and Kaitlyn Downey, Gabelli School of Business at Rose Hill (GSBRH) ’22, hit back-to-back three-pointers to give the Rams an early 6-0 lead. DeWolfe, the A10 Co-Player of the Year, continued to produce, hitting another three a few minutes later to extend Fordham’s lead.

But the UMass defense asserted itself quickly, and for the final four minutes of the quarter, only one Fordham player managed to score. Despite making just one basket all season, center Vilisi Tavui, FCRH ’21, scored six points at the end of the first to keep the Rams in contention. Yet, it still wasn’t enough to hold back the Minutewomen, as Sidney Taylor, UMass ’23, scored two late three-pointers to give her team a 22-19 lead.

The early stages of the second quarter resembled the first as the Rams struggled to match their opponent’s tempo on the floor. But after an official TV timeout with 4:59 remaining, Fordham emerged with all the momentum, scoring 12 points, seven from DeWolfe, to take a slim advantage at halftime, 37-34.
Late in the game, Fordham had to begin intentionally fouling UMass players to keep the team’s hopes alive. The Rams had forced so many other teams into this holding pattern over the course of the season, but they seldom had to do it themselves.
Entering halftime with the lead had proven immensely successful for Fordham in the 2020-21 season, as the team had only lost two games in the regular season after gaining the early advantage. One of those defeats, however, came against UMass, and the Minutewomen showed similar resilience in the third quarter of this postseason rematch.

After a fairly even beginning, UMass scored seven unanswered points to take a two-point lead over Fordham with 5:22 remaining in the third. The Minutewomen maintained their lead and extended it late, scoring five points at the end of the quarter to take a commanding 57-50 lead.

The final quarter is hardly worthy of remembrance for either side, as both defenses seemed to show signs of fatigue at the same time. Any score by Fordham was immediately followed by a retaliating score from UMass, and despite the fact that the Rams scored 20 points in the final 10 minutes, they only got as close as three points to the Minutewomen’s lead.

Late in the game, Fordham had to begin intentionally fouling UMass players to keep the team’s hopes alive. The Rams had forced so many other teams into this holding pattern over the course of the season, but they seldom had to do it themselves. Even then, UMass still managed to score from the floor, as Taylor and Sam Breen, UMass ’21, ran circles around a heavily fatigued Fordham defense.

With 2:04 remaining, Katie McLoughlin, GSBRH ’21, committed her fifth foul and exited the game. Seven seconds later, DeWolfe and Heremaia attempted to foul a UMass player and unintentionally ran into one another headfirst.

Blood splattered across the gym floor as Heremaia staggered to the sidelines while DeWolfe dropped to a knee on the far side, her hands covering her face. Both players left the game, leaving Fordham with just two of its original five starters on the court for the final two minutes of the team’s season.

The final two minutes passed extremely slowly, as the two teams scored 15 combined points in a game that had already effectively ended. The Minutewomen, the short-handed 7-seed, had defeated 2-seed Fordham again to advance to the semifinals of the A10 Tournament. The Rams, meanwhile, were literally and figuratively battered as the final buzzer sounded in a game they never stopped fighting to win. The final score was 80-70.
“The people who came in at the end were confident and ready, and they just played their hearts out. It was definitely a little obstacle, but we answered in the face of adversity, finishing together.” Katie McLoughlin, GSBRH ’21 and team captain
During the press conference, McLoughlin commented on the team’s refusal to stop playing hard in the final minutes, even after losing DeWolfe and Heremaia on the same play.

“The people who came in at the end were confident and ready, and they just played their hearts out,” McLoughlin said. “It was definitely a little obstacle, but we answered in the face of adversity, finishing together.”

One could blame the two-week pause for Fordham’s defeat, as it caused the complete loss of momentum mid-season. Even Gaitley pointed out that the team had only played twice in the past month. She also commented on how the team’s hiatus affected its play in such a competitive game.

“One of the things where we typically do a really good job is the attention to details defensively, and we didn’t do that today,” Gaitley said.

But to give so much credit to outside circumstances would also detract from a massive effort by UMass, which played through its own issues with a highly efficient, fast-paced offense that stymied Fordham for most of the game. Gaitley was also quick to commend the Minutewomen’s efforts in the contest.

“They came to play,” Gaitley said. “They were down numbers-wise, and their kids stepped up. I mean, it took a really good team.”

While an invitation to a low-level national tournament is still remotely possible, the Fordham women’s basketball team’s run in the A10 conference has ended. In a chaotic and unpredictable year, the Rams had their fair share of difficulties, and those obstacles may have cost them a chance at greater prizes.

But for Gaitley and McLoughlin, the goal of the season was not to win, but to play. The players took every precaution to avoid a positive COVID-19 test so that they could stay on the court. When they were forced off the court, they did everything in their power to return.

Then, as the final seconds ticked away on their season, the Rams continued to compete, even as the lead became insurmountable and their stars were escorted off the court in pain. It’s a different sort of victory, one that may seem more hollow but actually has a great deal of meaning. Players come and go in college athletics, but the culture of a team is far more persistent. So long as the women’s basketball team continues to prioritize playing above everything else, it will never truly have a losing season.