While employed at multiple schools simultaneously, Fava was highly involved with her family and dedicated to her work 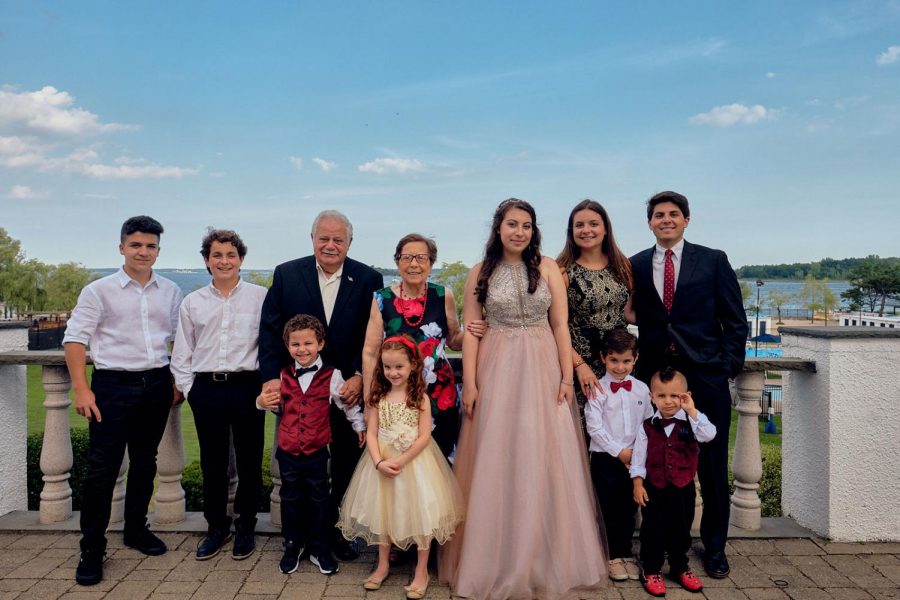 Fava and her husband John pose with their nine grandchildren at granddaughter Eva’s 16th birthday party in July 2020.

Matilde Fava, Undergraduate School of Education (UGE) ’69 and an adjunct professor of communication in the School of Professional and Continuing Studies (PCS) who served Fordham for more than 45 years, died peacefully at her home on March 1, 2021, the first day of her retirement. Fava was 78. The cause of her death was cancer.

Fava was born on Dec. 12, 1942, in Campania, Italy, and emigrated with her family to the Bronx in 1960. Her daughters said that she struggled as an immigrant woman but was determined to become a professor.

She first worked in a factory, taking English classes on nights and weekends, while also helping care for her siblings. She began teaching first grade at Our Lady of Victory in Mount Vernon, New York, in 1962.
“Family was the center of her life … Growing up, we had dinner together every night, whether it was before she taught a class … or after she got back from teaching a class.” Palmina Fava, daughter of Matilde Fava
While working full-time and raising a family, Fava earned her degree from Fordham’s UGE and a doctorate from New York University. In 1974, she began working at PCS, and about a decade later, she took an additional position at Farmingdale State College on Long Island.

“As a child, she had dreamed of being a teacher; it is clear that this dream was fully, and gloriously, realized,” University President Rev. Joseph M. McShane, S.J., said in a Fordham News interview.

Her daughters remembered her dedication to work and her family, and specifically the importance of family dinners.

“Family was the center of her life … Growing up, we had dinner together every night, whether it was before she taught a class … or after she got back from teaching a class,” Palmina Fava, Fordham School of Law ’97 and president of the Fordham Law Alumni Association, said.

In the Fava household, dinner hour could vary from 5 p.m. to 10:30 p.m., depending on Fava’s work at schools from New Jersey to Long Island. Palmina remarked that sometimes the family had picnic dinners on Eddies Parade on the Rose Hill campus.

After Fava’s passing, her daughters still feel the presence of their mother and her desire to share family meals together. The first Sunday after Fava’s death, the family came together for a meal, as the daughters said they still felt like they had to follow their mother’s rules.

She made sure “that we always ate our meatballs,” Joanna Fava, Graduate School of Arts and Sciences ’13, joked.

Palmina mentioned that her mother always said, “where there’s a will, there’s a way.” This sentiment was especially true during the pandemic, when Fava was able to organize social distanced dinners for the family.
“She was very open to new ideas and new approaches to teaching languages, and was passionate about promoting and incorporating Italian language and culture into the academic program.” Charles Adair, dean of arts and sciences at Farmingdale
Fava’s cultural values influenced not only the way she taught her children and grandchildren, but also the ways she supported the Italian American community.

She organized an Italian club while attending Fordham, a group of mostly working immigrant students. Years later, she founded a popular multicultural club at Farmingdale that was, according to Farmingdale President John Nader, “well-received” by students.

Charles Adair, dean of arts and sciences at Farmingdale, praised Fava’s zeal. “She was very open to new ideas and new approaches to teaching languages, and was passionate about promoting and incorporating Italian language and culture into the academic program,” he said.

Her hard work did not go unnoticed. Fava received a Teacher of the Year Award, an Award for Outstanding Dedication and Service to Italian Studies, and the Bene Merenti medal. She was also honored with a New York State University Chancellor’s Award for Excellence in Teaching, among others.

Beverly Kahn, the former provost of Farmingdale and an Italy specialist, wrote the recommendation letter for Fava to receive the Chancellor’s Award in 2015. She explained that Fava established the annual Italian Heritage Month celebration, an important school function. Even the Consul General of the Italian Consulate of New York City attended Fava’s events.

Her daughters said that Fava and her siblings worked to preserve Italian heritage, teaching it to their children and preserving Italian studies programs. Fava became “very connected with and aware of important figures, events and cultural happenings around the world,” Palmina said.

Kahn wrote, “Dr. Fava (was) an enthusiastic and creative ambassador and promoter of all things Italian and as a sincere internationalist.”

Although she loved Italy, Fava was involved with the American Veterans Affairs. “America had become (very important) to her … even though she was very keenly an Italian … she was really an Italian American,” Palmina said.
“Dr. Fava will always be an example for the new generations.” Eugenio Villarreal, interim chair of modern languages at Farmingdale
According to Joanna, Fava juggled being Italian and American, being dignified and humorous, being dedicated to students and committed to family, and “being a working woman and a very involved mother and a wife … She was very much present with every aspect of her life.”

Regarding her professionalism until the end, De Santi remarked that Fava was even “signing paperwork on my behalf only three days before she passed away. She completed everything she was supposed to complete on time.”

Palmina agreed, remembering that her mother was scheduled to meet with other department chairs the afternoon of her passing. “She was fundamentally someone whom people could rely upon, no matter what was going on in her life,” she said. Although Fava was diagnosed with cancer three years ago, her colleagues did not know of her illness until recently.

“Dr. Fava will always be an example for the new generations,” Eugenio Villarreal, the interim chair of modern languages at Farmingdale, said. Her dedication to her family and the places she worked has not been forgotten by anyone whose lives she affected.

“She … was just incredible with service for the university … she was able to be very diplomatic and maintain decorum in the most difficult situations,” Adair wrote.

Doreena Fava-Rodrigues, Fordham College at Rose Hill ’95 and Graduate School of Education ’96, remembered her mother’s professionalism. When she graduated in 1995, her mother handed her the diploma, reaching out for a handshake. Doreena hugged her mother instead, “excited that she was able to present me with the diploma.”

When Joanna graduated with her Ph.D. in 2013, she took a selfie with her mother. Fava “graduated from that composed, professional handshake to selfies on the steps of Keating.”

Kahn wrote that Fava would be proud of the way Fordham, a Jesuit school with social justice tenets, and Farmingdale, a low-cost school for New Yorkers, support and educate students like her seeking the same American opportunity that she lived.

Matilde Fava is survived by her husband, John Fava; daughters Palmina, Doreena and Joanna; nine grandchildren; and five siblings and their spouses. The visitation was held on Friday, March 5, at Yannantuono Funeral Home in Mount Vernon, New York. The Mass of Christian Burial was celebrated on Saturday, March 6, at Sts. Peter and Paul Church in Mount Vernon.

Fava’s family has established the Dr. Matilde Fava Student Scholarship Fund, which will be put toward students’ research of modern languages, literature, culture and the immigrant experience, in her memory.