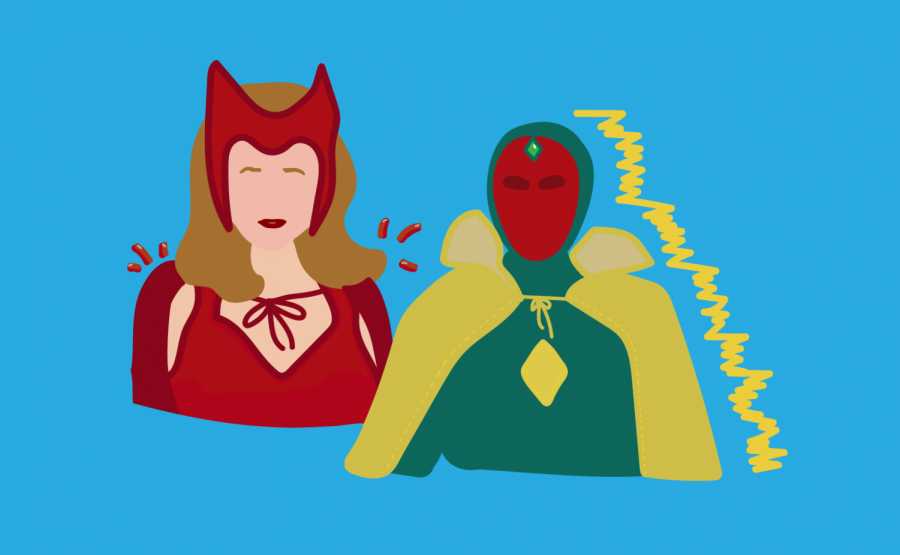 Warning: This article contains major spoilers from all the episodes of “WandaVision” and previous Marvel films.

When Marvel announced that “WandaVision” would come out at the start of the year, I was overwhelmed with excitement. I had been craving more content from Marvel Studios since the movies and TV shows were delayed by the COVID-19 pandemic. Hopeful that Phase Four of the Marvel Cinematic Universe (MCU) would start off very strong, I watched all of the episodes of “WandaVision,” and was not disappointed.

The show focuses on the life of a superhero couple, Wanda Maximoff and Vision, played by Elizabeth Olsen and Paul Bettany reprising their respective roles from previous Marvel films. After the events of “Avengers: Endgame” (2019), they move to a small town named Westview, but everything is not as it seems.
This scene is the first time the viewer will begin to realize that something is not right about the setting and characters.
The show resembles sitcoms throughout television history, establishing its uniqueness as it balances the worlds of sitcom and action. It keeps the viewer guessing and anticipating how the show will end. Fans may expect plenty of action sequences like other Marvel films, but since this show focuses more on character development, they will have to wait for a while.
Welcome to Westview
The series starts with the couple’s recent arrival to 1950s Westview and their preparations for a dinner party with the Hart family (the family of Vision’s boss, Mr. Hart). While the episode initially seems like a typical sitcom, the tone changes when Wanda and Vision are faced with a difficult question: where they came from.

This scene is the first time the viewer will begin to realize that something is not right about the setting and characters. The way Mrs. Hart stares at Wanda while repeatedly telling her husband to stop choking on his food reveals that everything the viewer watches is not as it seems.
Viewers are left to question if Wanda is the true villain of the show and how Vision will react to this behavior.
To add to the sitcom style, the commercial in the episode about a toaster from Stark Industries resembles a traumatic event from Wanda’s life. The episode ends with the revelation that the government agency Sentient Weapon Observation Response Division (S.W.O.R.D.) was also watching the episode. The added perspective creates an eerie feeling that Wanda is living in a different reality, which introduces the multiverse in the MCU.

Episode Two has a simple premise that adds to the mystery: Wanda and Vision participate in Westview’s talent show set in the 1960s. Like the last episode, there is a sudden shift in tone — everything starts to change once Wanda’s neighbor, Dottie, reminds her about the past, such as being a member of the Avengers.

The third episode, set in the 1970s, is filled with many enjoyable and surprising moments, such as Wanda’s twins, Tommy and Billy, being born and her conversation about her late brother, Pietro, with Geraldine, who is played by Teyonah Parris. Pietro is the superhero Quicksilver who appeared in “Avengers: Age of Ultron” (2015).

The shift occurs in this conversation when Geraldine reminds Wanda about her brother’s death by the villain Ultron. The fact that Geraldine has partial amnesia hints that she may have a large role in solving the mystery. Meanwhile, Agnes and her neighbor Herb nearly reveal to Vision why Wanda came to Westview.

From these first three episodes it is apparent that when Wanda is reminded of her past, she tries to avoid it by “rewinding” the episode or removing people from her reality, such as Geraldine. Viewers are left to question if Wanda is the true villain of the show and how Vision will react to this behavior. Despite the commercials acknowledging Wanda’s past, its focus on soap from Hydra also made fans question if it was a reference to another Marvel series, “Agents of S.H.I.E.L.D.” (2013-2020).
Family Is Forever
Episode Four takes a break from the sitcom style to focus on characters outside of Westview. Geraldine, who is actually Captain Monica Rambeau, is assigned by S.W.O.R.D. Director Tyler Hayward, played by Josh Stamberg, to find missing people in Westview, New Jersey. She works with FBI Agent Jimmy Woo, played by Randall Park, and the viewer learns how she became involved in Wanda’s sitcom. Kat Dennings returns as Dr. Darcy Lewis, from the Thor movies, to help figure out the situation in Westview.
This midseason episode gives a clearer idea of how the show is going to end. The pacing was perfect and allowed each character to shine, despite its 30-minute runtime.
The episode accurately captures fans’ reactions through the character of Darcy and everyone’s confusion about the show. The revelation from Monica at the end about Wanda’s full control over the reality raises more questions about how the show will end and hints to the viewer that Wanda might be the villain of her own show.

The fifth episode focuses on Vision’s growing concerns about Westview, which leads him to believe that Wanda is hiding something. The episode returns to its sitcom style, now set in the 1980s, but there are more transitions to the world outside of Westview.

This midseason episode gives a clearer idea of how the show is going to end. The pacing was perfect and allowed each character to shine, despite its 30-minute runtime. As expected, there were still surprises, so in the last scene, the viewer finds out that Pietro is back, but now played by Evan Peters. This moment surprised many fans since Evan Peters played Peter Maximoff in the recent X-Men films.

Episode Six is about the Maximoff family celebrating Halloween, now in the 2000s. Wanda and Pietro go trick-or-treating with Billy and Tommy after Vision decides to protect Westview. Meanwhile, outside of Westview, we learn that Hayward removed Monica, Darcy and Jimmy from the mission due to their empathy for Wanda.

A fantastic part of this episode is that each character is wearing their comic-accurate costumes. It is not unusual for Marvel films to show characters wearing their costumes from the comics. Pietro asks Wanda plenty of questions about how she made the reality, which raises questions about why he is in Westview. We also learn that Billy and Tommy have powers, which is a hint toward their eventual superhero roles in the MCU.

This episode emphasizes the dark tone that has been hidden throughout the show. Vision’s choice to try to help the people of Westview, even if it means risking his life, shows that he is always willing to do the right thing.
Many of the questions on fans’ minds throughout the series are finally answered in Episode Eight.
While this episode was very eventful, it felt like a setup for what was to come next because of the major cliffhanger.
Revelations
Episode Seven is set in the present day and uses mockumentary filming techniques. Throughout this episode, Wanda notices that the world around her is very unstable and is unsure about how to resolve it, leading her to become depressed. Outside of Westview, Monica attempts to reenter Westview and talk to Wanda again about resolving her issues, which reveals her powers. Vision teams up with Darcy to find the mystery behind the strangeness in Westview.

Vision learns about his past from Darcy who tells him that the love between him and Wanda is real. This line reminds viewers that despite hardships, Wanda and Vision will always care for each other. The final commercial about a medication called Nexus represents the reality Wanda made to find her happiness.

The end of the episode clearly shows a change in tone when it is revealed that Agnes is a witch named Agatha Harkness and was responsible for all the strangeness in Westview.

Many of the questions on fans’ minds throughout the series are finally answered in Episode Eight. The premise is that Agatha is also trying to figure out how Wanda created the sitcom reality and why she is so powerful. Agatha forces Wanda to relive her past as a means of finding answers.

We learn that Wanda grew up watching sitcoms and uses them as a way to cope with her trauma and “escape reality.” One scene that really caught my attention was the conversation between Wanda and Vision at the Avengers compound. Vision’s advice to Wanda to cope with her grief was heartfelt and is relevant to viewers who may also be going through hard times. I liked that Wanda said she had no intention of hurting anyone, especially since that contradicts the accusations made by Hayward in episode five.
Though fans may be used to the intensity of other films, the show’s creators decided to go in a different direction, and the risk paid off.
We learn that Wanda only wanted to say goodbye to Vision at the S.W.O.R.D. facility but realizes that Hayward is planning to recreate Vision into a weapon for the organization. As a result, she travels to Westview and we learn that she and Vision were planning to start a new life together there before the events of “Avengers: Infinity War” (2018) occurred. Out of anger and sadness, Wanda changes Westview into a sitcom reality to try and find happiness after losing many of her loved ones, including Vision.

In the finale, Wanda, Vision, Monica, Darcy, Billy and Tommy are able to protect the reality from Agatha, S.W.O.R.D. and the new Vision.

While this episode is very eventful, parts of it seemed rushed, such as the fight scenes. However, the philosophical argument between Westview Vision and the new Vision was very interesting. Many fan theories were proven false, such as Evan Peters’ involvement in the show, which may disappoint a lot of fans. However, it is understandable why the creators chose this route. The show was never meant to mainly be an introduction for the larger story in Phase 4: It was meant to be a story about Wanda Maximoff and her journey of becoming the Scarlet Witch.

The last few minutes were very emotional and served as a farewell to some of the characters for a while, such as Billy, Tommy and Vision. Since Wanda chooses to destroy her reality after realizing the harm she has caused to the people of Westview, we get a deep conversation between Vision and Wanda. Vision tells Wanda that she has to let him go and that they will meet again soon. Wanda leaves town to learn more about her powers.
The Future of the MCU
“WandaVision” is a very promising start to a new chapter in the MCU. Though fans may be used to the intensity of other films, the show’s creators decided to go in a different direction, and the risk paid off.

It will be very exciting to see more of the show’s connection to upcoming MCU films such as “Spider-Man: No Way Home” (2021), “Doctor Strange in the Multiverse of Madness” (2022) and “Captain Marvel 2” (2022). These connections are teased in the two post-credits scenes in the finale. As Wanda says to Vision in Episode Three, “We just don’t know what to expect.”