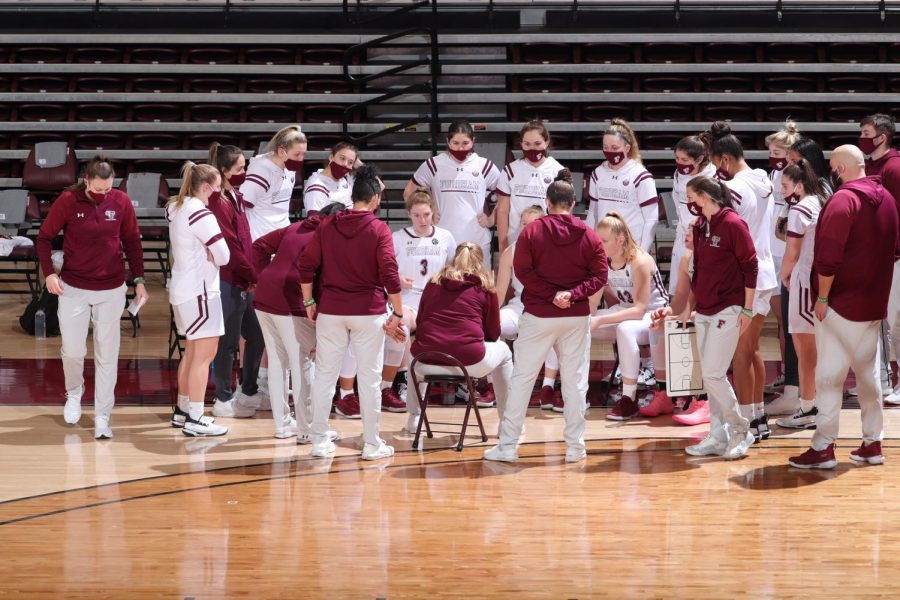 The temporary pause of in-person activities at Rose Hill, now in its second week, forced the women's basketball team to postpone three regular-season games less than a month from the Atlantic 10 championship.

Update, Feb. 22: As of the evening of Feb. 22, Fordham women’s basketball has announced the postponement of two further games on Feb. 26 and Feb. 28 against Dayton University and Saint Louis University, respectively. Portions of this article have been revised to reflect this information.

In the fast-paced world of college basketball during the COVID-19 pandemic, the events of a single week have the power to alter the course of a team’s entire season. On Friday, Feb. 12, the Fordham women’s basketball team was in second place in the Atlantic 10 (A10) standings and had just won its fifth straight game against Saint Joseph’s University. The Rams seemed unstoppable.

However, just two days later, on Sunday, Feb. 14, University President Rev. Joseph M. McShane, S.J., announced that the student body on the Rose Hill campus had experienced a spike in COVID-19 cases. In the preceding two weeks, 112 cases were reported, an increase that required immediate countermeasures to “reduce the infection rate.”

The solution, in accordance with New York state guidelines, was to institute a two-week pause on in-person instruction and on-campus activities. This included a temporary shutdown of all athletic programs.

Within 48 hours, the women’s basketball team’s remaining regular-season schedule was slashed from five games to two. Fordham’s game against La Salle University later that day was postponed soon after the announcement, and two road games on Feb. 18 and Feb. 20 against George Mason University and George Washington University, respectively, were also postponed.

After leaving the final two games of the season in play in the hopes of returning to action early, on Feb. 22, Fordham officially announced that the team’s final two games on Feb. 26 and Feb. 28 would also have to be rescheduled.

The problem with three postponements so late in the season is obvious, as Fordham has a very limited amount of time to reschedule them. In addition, the team had a great deal of momentum and a massive winning streak entering the twilight of the regular season and is now essentially on a mandatory cooldown.
“The players of our team are never trying to minimize how COVID has affected communities and programs all around us. However, our diligent efforts of abiding to all safety precautions is something that should not be overlooked.” Kaitlyn Downey, GSBRH ’22 and women’s basketball team captain
The loss in momentum was not lost on team captain Kaitlyn Downey, Gabelli School of Business at Rose Hill ’22, who expressed concern about the team’s ability to prepare for the final games of the regular season and postseason.

“Right now, we’re really playing well, we’re really connecting, and to stop that for a two-week pause would be devastating,” Downey said.

Downey cited several sources of frustration for the team. Their game against La Salle on Sunday was supposed to be Senior Day, an opportunity for players to honor their graduating teammates. From there, the team’s next two games were on the road, which meant that the players could have attended those games without disrupting campus life at Rose Hill.

In addition to scheduling frustration, Downey also cited the team’s successful adherence to health protocols. Beyond a COVID-19-related scare involving Head Coach Stephanie Gaitley back in December, the team has not had a single COVID-19 case. Despite the players’ limited impact on the number of cases at Rose Hill, their season has been halted anyway.

“The players of our team are never trying to minimize how COVID has affected communities and programs all around us,” Downey said. “However, our diligent efforts of abiding to all safety precautions is something that should not be overlooked.”

For the captain and her teammates, a two-week pause also created a world of fear and uncertainty after the events of last season. After losing in the semifinals of the 2020 A10 Tournament, the team earned a bid to compete in the Women’s National Invitational Tournament, which was later canceled due to the pandemic.
“We of course respect our institution and President and are proud to be Rams; we simply believe we earned the opportunity to complete our journey safely.” Kaitlyn Downey
Downey recognized the “scary reality” of losing another postseason, something that could occur if Fordham’s case number doesn’t decrease in the coming weeks. In fact, in the first five days following the pause, the number of cases at Rose Hill increased from 112 to 215. Losing such a significant amount of playing time so late in the season not only reminded the players of what they had already lost, but also helped motivate them to act.

On Tuesday, Feb. 16, Downey, with support from her teammates, started a petition asking McShane to allow the women’s basketball team to play a modified road schedule instead of taking a two-week pause.

“We of course respect our institution and President and are proud to be Rams; we simply believe we earned the opportunity to complete our journey safely,” Downey said.

The petition currently has 3,698 signatures as of the morning of Feb. 22, but McShane and other administration officials have not taken action yet.

While the team has every right to appeal to McShane, it’s unlikely that any change could be made regarding the two-week pause protocols, even with a cooperative and sympathetic administration. New York state guidelines, which Fordham has followed dutifully since the pandemic’s early days, explicitly state that athletic competition “must be suspended” when a university enters a two-week pause.

It’s unlikely that the two-week pause will end prematurely for the women’s basketball team, but A10 officials have made several adjustments to the conference schedule that will assist Fordham. These changes will also help other affected teams like the University of Massachusetts, which just ended its own two-week pause on Feb. 21.

In addition to moving the A10 Women’s Basketball Tournament starting date back an entire week to March 10, seeding eligibility has also been adjusted. Teams that have played more than 60% of the median number of conference games played by all 14 teams will be seeded by winning percentage within the conference.

Any team that meets this threshold will also be eligible to win the regular season title, and with 10 games played, Fordham’s immediate future following the pause is secure. The additional week before the A10 Tournament will also allow the team to reschedule more postponed games. The team is technically still in the running for the regular season title and will receive a high seed in the tournament regardless.
“This is nobody’s fault. We’re just going to trust the process across the board and focus on what we can control.” Stephanie Gaitley, women’s basketball head coach
The only question that remains is whether or not the two-week pause will affect the team’s performance. When asked about this potential impact, Gaitley laughed and admitted that she was coaching under unprecedented circumstances.

“I don’t know, I guess I’ll find out,” the head coach said. “We obviously have very good talent, but we just have great chemistry, so I’d like to think that if we’re capable of getting a few practices under our belt, we’ll just pick up where we left off.”

Like Downey, Gaitley also stressed the importance of trusting McShane in his effort to ensure the safety of the entire student body. The head coach said that her team has conducted itself well during the pandemic but that in a world constantly affected by similar shutdowns, easy answers were hard to come by. She recognized and appreciated the president’s efforts, even as they sidelined her team.

“This is nobody’s fault. We’re just going to trust the process across the board and focus on what we can control,” Gaitley said.

When Fordham returns to the court, it may reschedule games on short notice against some of the best teams in the A10, like Dayton University, currently 11-1 in the conference. The team may also have to play Saint Louis University, the team that recently gave Dayton its first conference loss. It could be a very difficult schedule for a team coming off a long break.

Uncertainty is as prevalent now for Fordham Athletics as it has been since the pandemic first began. It’s unclear if the women’s basketball team will continue their winning streak against better-conditioned teams, and an elusive bid in the NCAA Tournament may now seem ever so slightly further away. There’s even a chance the team will miss further playing time as Fordham’s COVID-19 number of cases continues to increase.

However, considering Downey’s actions on behalf of her teammates, there is a guarantee that the Rams will be eager to return to the court when the time comes. It’s this resiliency that Gaitley is counting on to bring her players out of dormancy and back to the highest level of college basketball.