In the face of the pandemic, the 24-year-old artist offers a distinct political message grounded in knowledge and spirituality 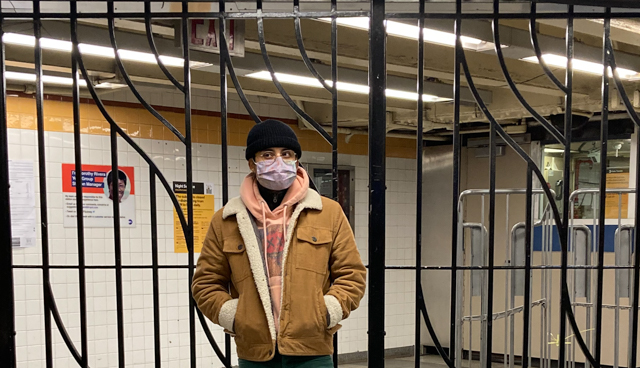 Visual street artist Antonio Garcia is standing by the turnstile at the Eighth Avenue and 14th Street subway talking with a middle-aged woman about one of his pieces. A few other commuters peer at the swirling colors laid along the station wall. Sporting his custom-made mask and pink sweatshirt, Garcia pulls off his cap to reveal his neon-green hair. Garcia is here every day; a small folding table overflows with his 8.5-by-5.5-inch works while his larger pieces line the wall of the station.
Meeting the Artist
The last time I saw Garcia was in Washington Square Park the night the election was called for Joe Biden. His warm expression and the exploding colors of his artwork exemplified the loving and unifying spirit of that celebratory day in November. I waited for him to finish talking to his “customers,” faces strange and familiar which he greeted with equal kindness.

“Life is a rise and fall,” he said about how he has been during the ongoing pandemic. “I’m just coping right now and making a lot of art. I feel very blessed, very appreciative for all that I have right now… to be out here doing this.”
Life During the Pandemic
He told me he lost his uncle to COVID-19 a few weeks ago. While it’s been hard, he chose to remember his uncle for the man he was and the positivity he brought to his family. To honor his uncle, Garcia now lives by the phrase “we die once but live every day.”

Garcia thinks the tragic events of the past year, from the pandemic to rising financial inequality, have given him a much deeper understanding of life. “We have to live knowing there’s so much more,” he said. “We live in a capitalistic society that profits off of us all time. Everything we do is profit.” He sees the economic crisis as intrinsically linked to our capitalist society.
Capitalism and Its Impact on Garcia’s Life
However, Garcia has faced challenges before the pandemic. He said that the time he spent experiencing housing instability and as an immigrant has informed his worldview. He is deeply critical of the oppression and exploitation of minorities and their labor.

Corporations break people; they see us as cattle,” Garcia said. He doesn’t let this understanding cause him to hate, however: “I don’t hate rich people. I hate the money and greed that corrupts people.”

He points to a piece depicting WALL-E, the sentient robot of the eponymous Disney-Pixar movie. In the film, big business has completely ruined the environment and humanity has to evacuate Earth. In Garcia’s work, WALL-E is owned by Amazon and the megacorp has made human labor obsolete. Garcia said, “WALL-E showed us what’s going to happen in the future. I really believe that it’ll happen.” He thinks ignorance and capitalism are to blame.

“Every piece of code written is a job that’s taken away. Our society is consume, consume, consume; throw away,” he said. Garcia believes that if this model continues, “(We) won’t just lose jobs. We’ll lose our minds.”

The recent events at the Capitol led him to create a piece titled “Ignorance is Bliss.” The piece draws inspiration from the stoning of Saint Stephen. It shows several men with smiley faces stoning one with a frown. He said, “Someone at the Capitol was saying ‘Trump lost. Trump lost,’ and they beat him up. They’re willing to be ignorant because it makes them feel happy, it makes themselves feel good.” He hopes the piece makes people understand that blissful ignorance is a lie.

Garcia fears if we continue to choose ignorance, we’re doomed to let the wealthy and powerful get the best of us. He’s wary of technology driving us apart. “Once we lose human connection, we lose creativity — we lose the soul.”
Directing Spirituality Into Art
While these immense issues weigh him down, Garcia said that studying various religions has helped him cope. Garcia told me he was raised Christian but has examined many faiths, the first of which was Mormonism.

“I wanted to know why people thought that this man, Joseph Smith could have even spoken to God. Then I got introduced to the Muslim religion. I got very close to it because of the fact that it was preaching what everybody else was preaching: Unity, respect and love for one another, but I realized this is the same religion,” he said. “Everything’s the same religion with a different language.”

He said the core tenets of all world religions tell us to love one another. This led Garcia to explore Buddhist texts. He says Buddhist ideas on change and acceptance are needed now more than ever.

“(Buddhism) taught me to appreciate the now, the art of being able to just be,” Garcia said. “I’ve been focusing on it every day. I wake up in the morning and lay in bed for five or ten minutes and just listen to things happening, just being. Then I go outside and sit in the cold for a few minutes to just experience.” Garcia believes that we all need to practice this kind of mindfulness.

This spiritual and mindful perspective has influenced Garcia’s art. He talked about the importance of caring for the whole creative process, from the first spark of an idea all the way to waiting for the finished product to dry.

Despite the flaws in our world, Garcia thinks connecting with others and learning as much as you can will help all of us live happier lives. “It gives me reassurance to continue, not in my beliefs, but in looking for the truth and creating my own truth.” Garcia hopes the younger generation rejects the socialized ideas we’ve been raised to believe. “Question everything you know, because not everything we hear is the truth.” While it’s rarely easy, he said, “sometimes we have to struggle to find how to live. If you take the easy way you’ll never learn how to find a better way. Always choose the harder path because you’ll get the greater reward.”