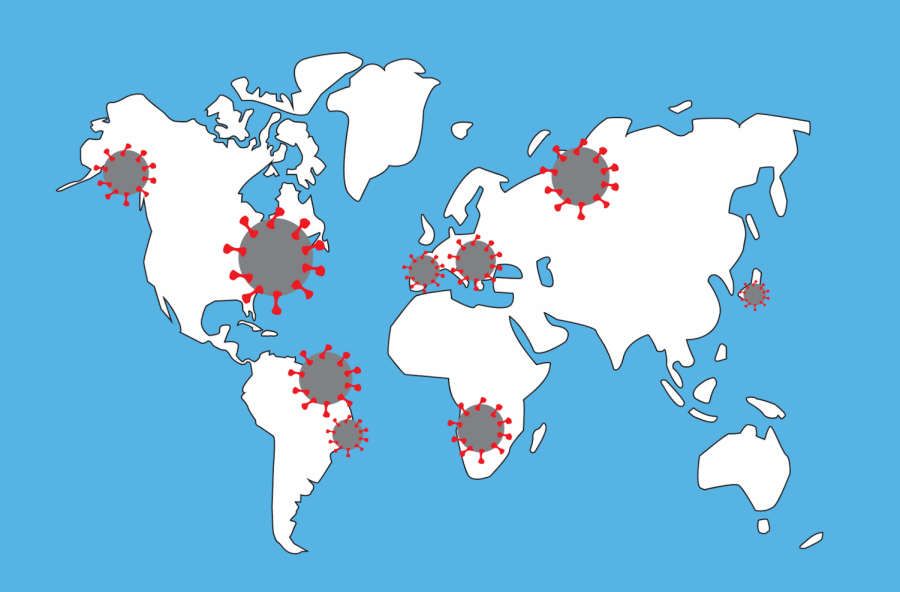 As early as September 2020, new strains of COVID-19 were detected in Denmark, Britain and South Africa, according to the World Health Organization. In early January, another variant from Brazil was confirmed in Japan and in Minnesota.

While mutation of the virus is unsurprising, concerns over the high virality of the British and South African strains, which were announced in December, have taken global health experts by storm.
How Viruses Mutate
In order to understand what is happening around the world, it is necessary to understand viruses. First and foremost, they are dependent on a host for survival, binding to the host’s cells and using their own RNA to disrupt normal cell function. The translation and replication process of RNA is rapid and prone to minor changes over time called “antigenic drift.” This usually refers to alteration of the virus’ protein structure, which enables the body to recognize and respond to it.
The virality and mutation rates of the virus are leading health care workers to worry about increases in hospitalizations and the potential for vaccine-resistant strains.
COVID-19 is not the first coronavirus in existence, but it is the one that has bound itself to human beings. So far, only drifts have occurred in the virus. However, there is worry about “antigenic shift,” an abrupt and dramatic change in the structure of the virus. Such a change can allow a virus to change hosts, like from animal to human, and make the virus difficult to detect and treat with current tracing and treatment techniques.
Discoveries in the UK
In late December 2020, the BBC reported on the variant that was discovered in September and is now the dominant strain of COVID-19 in the U.K. While it is not proven to be more deadly and current vaccines still appear to be effective against this strain, it is more easily transmissible. B.1.1.7, as it has been named, has been found in at least 60 countries and 33 states in the U.S.

The virality and mutation rates of the virus are leading health care workers to worry about increases in hospitalizations and the potential for vaccine-resistant strains. As of Feb. 4, the Centers for Disease Control and Prevention reported a total of 611 B.1.1.7 cases in the U.S., a number that is continuing to rise.
South African Variant
South Africa also reported another new strain of COVID-19 in December: 501Y.V2. Now more commonly known as B.1.351 for a protein mutation that makes transmission easier and faster, this mutation is also found in the U.K. variant. However, what is more troubling to experts are the mutations not found in the U.K. strain, which, according to CNBC, “could affect how vaccines against Covid work.”

On Jan. 12, Dr. Anthony Fauci warned that the South Africa variant “could pose a threat to antibody treatments that are used to prevent people from falling seriously ill from COVID-19.” Scientists are still studying the efficacy of current vaccines, but evidence from three recent studies displayed signs that antibodies and these vaccines are less effective in fighting this variant.
Moderna has continued to update its vaccine, developing a booster shot to combat other potential variants.
Moreover, following these studies, Fauci recently said that those who were previously infected with COVID-19 may not be protected against B.1.351 and can be reinfected.

The first cases of B.1.351 in the U.S. were found in South Carolina in mid-January, with Maryland recently reporting a new case last week.

On a lighter note, Moderna has continued to update its vaccine, developing a booster shot to combat other potential variants. Pfizer has also begun “laying the groundwork to respond quickly” to new variants that show potential resistance to current vaccines.

Despite public concerns over vaccine efficacy in protecting against the virus, immunologists, virologists and other disease doctors, including Fauci, continue to recommend getting the vaccine as soon as possible. With the virus continuing to spread, the primary goal now is to minimize the number of hospitalizations and deaths.

However, although vaccine eligibility is opening to include the elderly and essential workers, the speed of distribution is still a serious concern.

What This Means for the US
Amid the global frenzy, concerns over vaccinations and spread in the U.S. are at the forefront of health workers’ minds. Hospitals and vaccination sites nationwide have struggled with vaccine distribution since the beginning of the year. The biggest issue is not having enough vaccines.

Operation Warp Speed’s goal was to deliver 300 million doses by the end of January, but according to The New York Times vaccine rollout tracker, only 30.6 million doses have been distributed and about 11.1 million people have received the initial dose. With the number of positive cases and COVID-19-related deaths continuing to climb and new variants being found within the U.S., the race to vaccinate the public is on.

On Jan. 12, New York Gov. Andrew Cuomo expanded vaccine eligibility to include adults over 65 and immunocompromised individuals. Now, at least 28 states have followed suit in vaccinating the elderly population. In addition to health and long-term care employees, teachers, grocery store workers and individuals whose jobs put them at higher risk of contracting the virus are now included in the programs of at least 32 states. However, each state operates at its own discretion in prioritizing who receives the vaccine.

As the spring semester begins, many students have returned to college campuses nationwide. Although the vaccine is now reaching the public, following and maintaining university and state COVID-19 guidelines remains of the utmost importance.