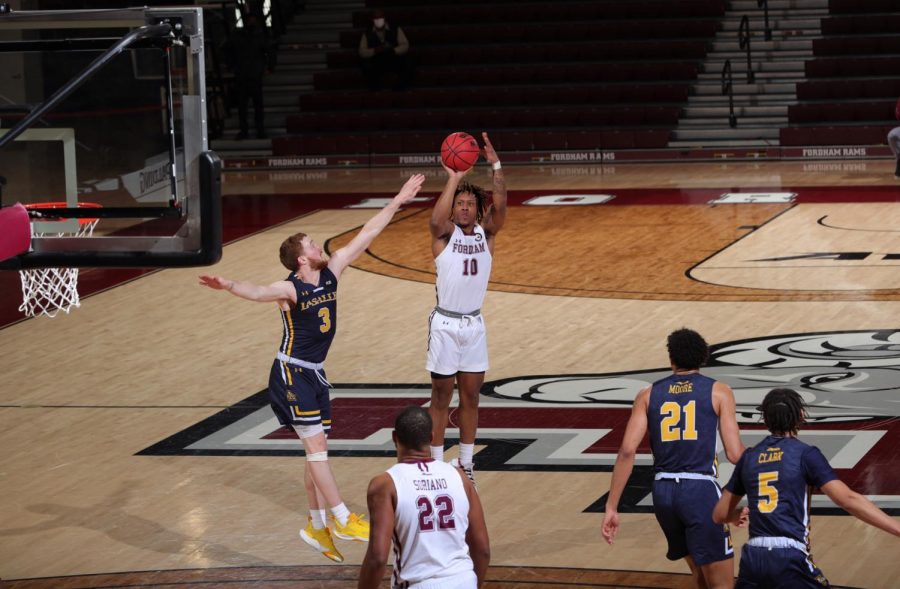 Ty Perry, FCRH ’22, scored 18 points off the bench in Fordham’s victory over La Salle on Saturday.

The Fordham Rams scored 76 points in their victory over the La Salle University (LSU) Explorers in a Saturday matinee on Feb. 6. The win featured the most points scored in a game by the Rams this season, beating their previous high by 14 points.

The Rams’ victory over the Explorers was their second win of the season, following seven consecutive losses. Interim Head Coach Mike DePaoli also registered his first career win as a head coach, a role he only just assumed after previous Head Coach Jeff Neubauer left the program.

“I’ve been here for 11 years and I’ve done everything from take out the garbage in the locker room to be the head coach,” DePaoli noted after the game. “It’s special, I’m not going to lie to you. And what makes it even more special is doing it with this group of guys.”

Fordham’s explosive offensive performance and active defense throughout the game could perhaps be attributed to DePaoli’s effervescent energy on the sidelines. DePaoli ceaselessly vocalized instructions and encouragement to his team.

The result of this animation was a balanced offensive attack that included five Rams scoring in the double digits and a defensive performance that featured guard Kyle Rose, Fordham College at Rose Hill (FCRH) ’23, notching five steals, a career high.
Ultimately, timely and efficient shooting, notably an 18-point performance by Perry on 6-9 (66.6%) from three and a career-high 15 points from Rose, was too much for La Salle to overcome.
La Salle entered the game riding a wave of positive momentum. Not only had the Explorers won nine consecutive meetings against the Rams, but they also beat Atlantic 10 (A10) powerhouse Saint Louis in a high-scoring shootout in their previous game.

The Explorers utilized a high-octane offense to power them to a record of 8-10 entering their meeting with the Rams, scoring 67.6 points per game on average. Fordham entered Saturday’s game averaging 51.5 points per game.

The Rams combated La Salle’s strong offense from the jump, keying in defensively on the Explorers’ top scorer, Sherif Kenney, LSU ’23. Kenney scored zero points in the first half and finished the game with only six points.

Meanwhile, Fordham’s offense clicked for the entire game. After the Explorers’ lone burst in the first half, an 8-0 run at the 13:54 mark, the Rams exploded on the offensive end. For much of the half, the Rams went shot-for-shot with the Explorers, and the game remained close with guard David Beatty, LSU ’21, making a layup to give La Salle a 17-16 lead with 9:57 remaining in the half.

From that point on, the Rams outscored the Explorers 21-7. Guard Ty Perry, FCRH ’22, made three three-pointers during that stretch, and the Rams carried a 37-24 lead into the halftime break.

The second half differed greatly from the first. La Salle picked it up on offense, with Fordham’s defense struggling to contain the Explorers’ newfound success. As a result, Fordham attempted to match La Salle’s firepower with scoring of its own.

While this strategy may have failed in past games, the Rams’ scoring in the second half helped them maintain their lead despite La Salle’s offensive barrage. Fordham even managed to improve shooting statistics in the second half, shooting 13-25 (52%) from the field and 6-12 (50%) from deep.

Despite the shooting success by the Rams, La Salle managed to cut into Fordham’s lead. This is partially due to the intense press utilized by the Explorers, defending Fordham’s ball-handlers for the length of the court rather than sitting back in the half court. While the tight defense by La Salle did not limit the Rams’ shooting abilities, it did force turnovers that allowed the Explorers to sneak back into the game.

Ultimately, timely and efficient shooting, notably an 18-point performance by Perry on 6-9 (66.6%) from three and a career-high 15 points from Rose, was too much for La Salle to overcome, and the Explorers never reduced the lead to fewer than five points.

Forward Joel Soriano, FCRH ’23, had another strong performance. He finished the game with 13 points and 13 rebounds, contributing on both ends of the floor.

With Kenney neutralized for most of the game, La Salle guard Christian Ray, LSU ’23, stepped up and filled the scoring void. He scored 11 of La Salle’s 24 first-half points and would finish the game with 18 points and 9 rebounds, leading the Explorers in both categories.

The victory could not have come at a better time, as Fordham approaches a very difficult stretch of games that culminates in the A10 Tournament. The Rams will try to maintain the momentum from this victory as they head to George Mason to play the Patriots in an evening game on Wednesday, Feb. 10.