After using his executive power, President Biden only instills a false perception of real change, unsurprisingly offering no real framework toward bettering the lives of trans people 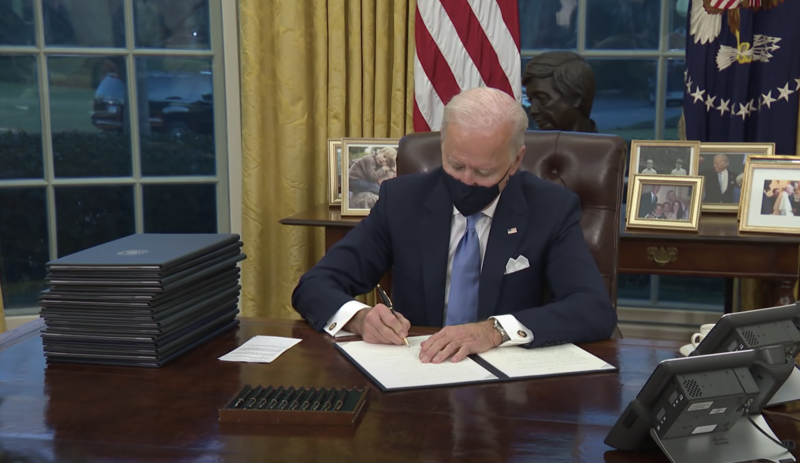 THE WHITE HOUSE VIA WIKIMEDIA COMMONS

One of Biden's most-discussed executive orders has been the lifting of the ban on transgender people serving in the military, which is not a meaningful improvement to their lives in America.

President Joe Biden ran on a campaign that was going to “restore America” from the mess that Trump and every past president has left it in. Promises were made to end student loan debt, close the camps at the border and return children to their families, distribute stimulus checks, end discrimination … the list continues.

So far, camps are still open, student loan debt is still rising, stimulus checks have not been distributed, and the LGBTQ+ community, specifically Black trans people, are still facing everyday problems like securing safe housing and employment. It is abundantly clear that Biden’s promises were solely a strategy for winning the election rather than actually helping people. He did, however, pass anti-discrimination laws specifically aimed at the LGBTQ+ community. Their impact? Questionable.
The Horrific Year of 2020
The trans community in the United States faced a tragic and horrifying year in 2020. The United States held its spot as the most dangerous country for trans people to live freely, and, tragically, we lost at least 44 transgender or gender-nonconforming people. I say at least 44 because those are the reported deaths. Many times these deaths go unreported due to the transphobic violence the victims face, not to mention that trans people are often misgendered in death, making it harder to locate loved ones.

The majority of the beautiful trans lives that we lost in 2020 were Black and Latinx trans women.

As always, hopes were high for a portion of the American people when Biden won the presidential election, as well as when he was inaugurated in mid-January. For me, and many people within the trans community, a win for Biden meant little to no real fundamental change in life. Especially for the super-exploited Black trans woman, Biden offers no substantive change besides stating that trans lives matter to him.
How can we praise the lifting of the trans military ban when trans people in the United States live in constant fear and danger?
Super-exploitation, a term coined by Claudia Jones, a Black communist journalist, explains how the Black woman is exploited due to her race, her gender and her labor. My question is, do Biden and Vice President Kamala Harris really know how to solve the issue of the super-exploitation of trans people?

Both Harris and Biden have a history of supporting pro-mass incarceration legislation. Harris, in particular, put a trans woman in a men’s jail. Biden created the 1994 Crime Bill, which is responsible for incarcerating people at alarming rates and disproportionately targeting Black people. There is a lot of pressure from Biden/Harris supporters to see the duo enact real and fundamental change in their first 100 days in office. I don’t have high hopes at all; past legislation sets the current tone for the Biden administration, making it clear that the new legislation passed is a performative act rather than a life-changing structure for marginalized lives.
Biden’s First 100 Days Approach
On Jan. 25, Biden reversed the transgender military ban, while also using his new executive power to prohibit discrimination against people based on their sexual orientation or gender identity.

At the surface level, these look like great wins for the LGBTQ+ community — laws put in place to incite further legislative action. But, as we have repeatedly seen in the history of the imperial core, words are one thing; actions are another. Biden lifting the military ban on trans people, stating that nobody can be discriminated against due to their gender identity (adding to the anti-discrimination laws already put in place), is the farthest thing from an improvement. It is a performative act that propels no real change toward the everyday challenges trans people face living in the United States, like obtaining safe housing, employment and health care.

In Frantz Fanon’s “Wretched of the Earth,” the philosopher draws on these conclusions of past history and present promises from U.S. politicians.

Fanon wrote, “We have become so used to the occupier’s contempt and this determination to maintain his stranglehold, whatever the cost, that any semblance of generosity or any sign of goodwill is greeted with surprise and jubilation.” This is why empty promises of “no discrimination” do not cut it.
It is not enough to say that people here aren’t discriminated against when the very person who is making that claim is discriminating against people abroad.
This is exactly what happened with liberals and Biden administration supporters who cheered and reposted photos of him, praising him for allowing trans people into the military.

How can we praise the uplift of the trans military ban when trans people in the United States live in constant fear and danger? How can we expect trans people to serve a country that does not serve them? That doesn’t protect them? Where will these troops go and who in the Global South will be affected? Consequently, we are sending trans troops to enact violence on other exploited and marginalized lives abroad and praising that as a win.

Foreign Policy and International Discrimination
While in America things are all fine and dandy from a power change from one white supremacist to the next, abroad, Biden has his hands tied. He has recognized the Venezuelan opposition leader, Juan Guaido, as the country’s president instead of the democratically elected socialist president, Nicolas Maduro.

While Biden’s appraisal of the fake Venezuelan leader, Guaido, is not new news, Secretary of State Anthony Blinken claimed that the U.S. Senate and Biden would seek to place sanctions on Venezuela until Maduro backs down to Guaido.

This is a repetition of the dirty history of sanctions and economic coups that the U.S. places on other countries. Nothing about targeting a Latin American socialist government screams “ending discrimination.”

It is absolutely necessary to look at how our actions affect countries and people internationally. It is not enough to say that people here aren’t discriminated against when the very person who is making that claim is discriminating against people abroad.

Sanctions kill. Sanctions block access to resources that are necessary for life. During a pandemic, the United States should prioritize the health and safety of the entire world, instead of actively placing sanctions and starting coups in Latin America. Biden’s administration is picking up right where Trump’s administration left off, only this time, the Biden administration will cover its actions with unsubstantial legislation.

Biden also promised to close the camps on the borders and release the children who were separated from their families. While the latter has been approved (who knows how they are going to reunite 500+ children with their families), there have been crickets about actually closing the camps. As of Feb. 2, the Biden administration is preparing to reopen an “overflow facility for migrant children”; in other words, Biden will reopen the camp in Carrizo Springs, Texas.

These are just a few examples of what Biden has and hasn’t done for the transgender community and for the most marginalized people in the world. Biden cannot be “pushed left” by the people because Biden is not valuing the words and needs of said people. The people, in the ruling class’s eyes, do not have political power over them. If we the people could actually change things electorally through figures like Alexandria Ocasio-Cortez, Ilhan Omar or even Biden, we would have already. But we haven’t, because to U.S. politicians, the priority has never been the people, but rather their own pockets.