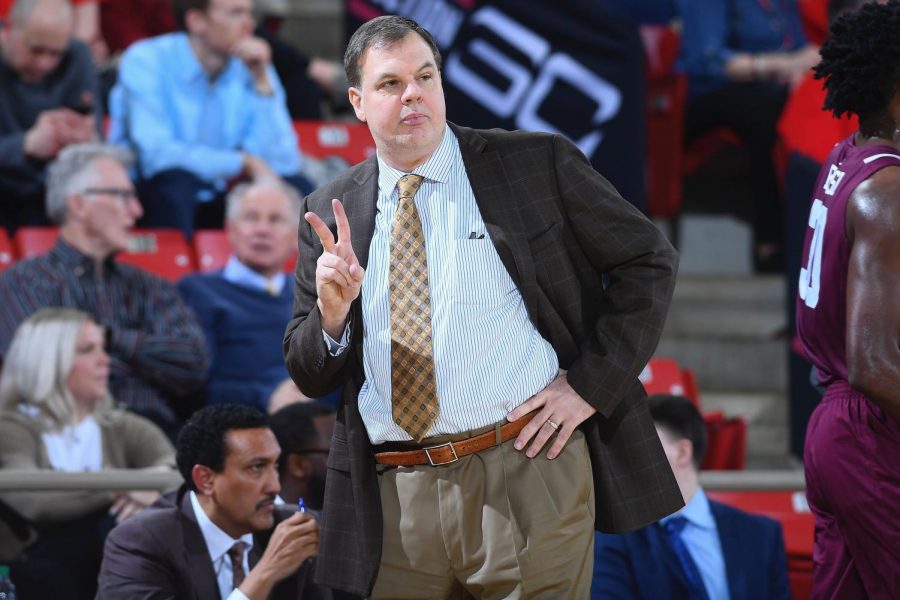 Neubauer signals to a player during a game. He leaves the men's basketball team amid a season with a 1-7 record.

Fordham Athletics announced on Tuesday that men’s basketball Head Coach Jeff Neubauer was leaving the program. Assistant Head Coach Michael DePaoli will assume the position of interim head coach, though a “national search” to fill the position permanently will commence after the 2020-21 season.

Fordham Athletics has not provided a reason yet for Neubauer’s release, nor has it explained why the coach left prior to his contract termination at the end of the season.

In the Fordham Athletics press release, Interim Athletic Director Ed Kull stated that Neubauer’s departure was “effective immediately,” and he thanked the coach for his time at Fordham.

“Fordham Athletics appreciates Coach Neubauer and his commitment and leadership to our men’s basketball program over the past six seasons,” Kull said. “We are grateful for Jeff’s hard work and dedication, and thank him for his service to Fordham. We wish him and his family the best in the future.”

After working as an assistant coach under John Beilein at West Virginia University, Neubauer’s head coaching career began in 2005 at Eastern Kentucky University. In 10 seasons with the Colonels, he compiled a 188-134 record and led the team to two NCAA Tournament berths. He arrived at Fordham in 2015, replacing former head coach Tom Pecora.

In an article with Fordham News following the hire, Neubauer expressed excitement at the prospect of coaching at Fordham in the Atlantic 10 (A10) conference. The new position represented an uphill battle for the new coach, as the team had gone 44-106 in the previous five seasons under Pecora.

“I am thrilled to get the opportunity not only to be head coach at Fordham but to coach in New York City,” Neubauer said at the time. “I really love challenges and am very aware of how competitive the Atlantic 10 Conference is and I’m looking forward to helping Fordham move forward in the conference.”

Since then, Neubauer has compiled a 61-104 record in what would have been six seasons with the Rams. The team has never finished better than eighth in the A10 during his tenure.
“We thank Jeff Neubauer for his hard work and dedication on behalf of our student athletes and the University.” Joseph. M. McShane, university president
As Neubauer leaves the program, Fordham’s 2020-21 season is well on its way to a disappointing end, as the team currently holds a 1-7 record. Beyond a 55-54 upset victory over Dayton University on Jan. 5, the team has lost by 17 points on average and ranks near the bottom of the A10 in every statistical category.

Fordham President Rev. Joseph M. McShane, S.J., also had parting words for Neubauer, in which he wished the coach luck in his future endeavors.

“We thank Jeff Neubauer for his hard work and dedication on behalf of our student athletes and the University,” McShane said. “We wish him well as he embarks on a new chapter in his career.”

It will be difficult for Fordham to salvage its 2020-21 season under DiPaolo following a 1-7 start. In addition, the next head coach, whoever it is, will not have it any easier than Neubauer did when he first joined the program. The team hasn’t had a winning record in the A10 since the 2006-07 season.

After spending time with a famous coach and finding his own success at Eastern Kentucky, Neubauer entered his position at Fordham with promise and hope. In over five seasons with the Rams, however, he failed to improve the program’s standing. The university will soon begin yet another search for success in a profession strictly based on wins and losses.