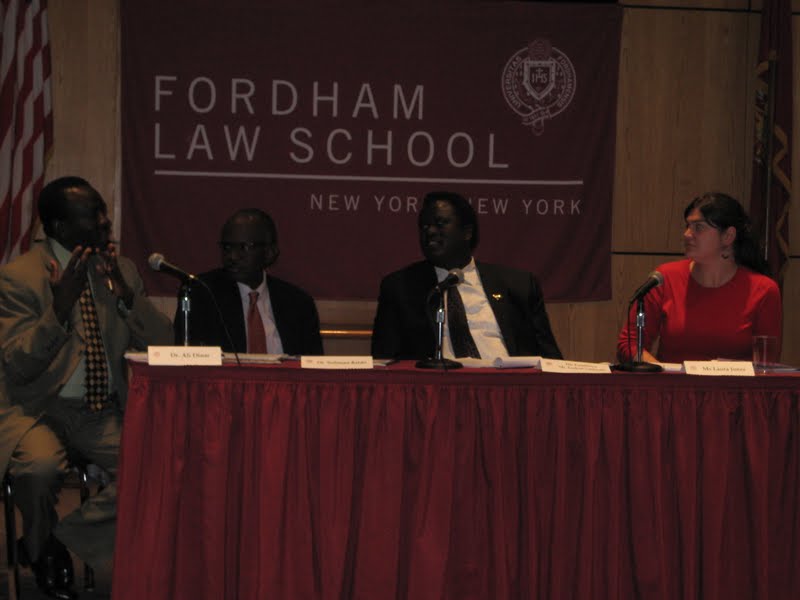 Academics, policymakers, activists and students convened at Fordham Law School on April 9 for a conference on Sudan’s post-referendum challenges.

The conference, sponsored by Fordham University’s department of African and African-American studies, focused on how North and South Sudan can best avoid a renewal of conflict following a January referendum in which Southern Sudanese voted overwhelmingly for separation from the North.

“The main objective was to bring academics, policymakers and members of the public together to discuss the post-referendum challenges,” said Amir Idris, associate professor of African studies and associate chair of the department, who organized the conference. In his opening remarks, Idris said he hoped to have “a candid conversation about the issues,” including border demarcation, oil revenue sharing and citizenship status, and offer a “fresh vision for peaceful coexistence after separation.”

Speakers included Suliman Baldo, director of the Africa Program at the Center for Transitional Justice, who delivered the keynote address, Ezekiel Lol Gatkuoth, representative of the Government of Southern Sudan in the United States, Laura Jones, Sudan policy analyst at the Enough Project, and Ali Dinar, associate director of the African Studies Center at the University of Pennsylvania. Daffa-Alla Elhag Ali Osman, permanent representative of the Republic of Sudan to the United Nations, and Laura Beny, professor of law at the University of Michigan, both of whom were scheduled to speak, were unable to attend.

“The core issues that need to be addressed have not been approached,” Baldo said, referring to the need for the National Congress Party (NCP), the northern ruling party based in the capital Khartoum, and the Sudan People’s Liberation Movement (SPLM), the southern ruling party based in Juba, to resolve unsettled issues prior to July 9 when south Sudan will become an independent state.

Baldo focused on the citizenship issue in his address, citing that many Southern Sudanese live in the North and Northern Sudanese live in the South, thus their citizenship status will need to be resolved in order for the two states to avoid a potential return to violence following official separation. Some solutions he offered include establishing a “soft border” between North and South Sudan that would allow for the movement of peoples, grazing cattle and goods across the border, as well as dual citizenship for Sudanese living in the border region.

The issue of citizenship is marked by “Khartoum’s mindset of using populations as military tools,” Baldo said, explaining that the NCP’s militarization of ethnic groups in the border region and south is “part of the power game.” He said that citizenship receives the least attention of the three core issues, but needs to be focused on. “All the wars of Sudan are identity wars…[Sudanese] are fighting against economic, political, social and cultural marginalization.”

Baldo said that Sudan should be “a government for all Sudanese, not just some of them.”

Since the signing of the Comprehensive Peace Agreement in 2005, which ended a two-decades-long civil war between the NCP and SPLM, “We have failed to transform Sudan into a better society,” Gatkuoth, a former Sudan People’s Liberation Army (SPLA) soldier, said.

Sudan owes the International Monetary Fund and the World Bank $38 billion, according to Gatkuoth. He said South Sudan should not have to contribute to the payment of foreign debts because the South did not see the benefits of foreign money, in the form of development and infrastructure.

After July 9, Southern Sudanese will no longer hold Khartoum accountable; Juba will be held accountable, according to Gatkuoth. The SPLM is working to build institutions, fight corruption and uphold the rule of law, he said.

In regards to the issue of oil revenue sharing, Gatkuoth said, “For now the position is very clear: we are not sharing our oil.” He said the South would pay for use of northern pipelines in order to transport oil to seaports, “but that’s it.”

“The country that will have the largest embassy [in South Sudan] is Northern Sudan,” Gatkuoth said. Destabilization of the South or North would be harmful for the other country.

Jones outlined the security challenges in South Sudan, specifically noting the proliferation of various militias, some likely armed by the NCP in an effort to destabilize the SPLM government, she said. “The SPLA’s approach to militias has been to offer amnesty and integration [to rebel soldiers].”

Tensions with the North and inter-tribal conflict, which are both related to the militias issue, are additional security challenges, Jones said. The South should invest more in infrastructure, demobilize and demilitarize militias, integrate and size down the SPLA, establish a civilian police force and ensure good governance, rule of law, a free press and democratic elections in order to reduce the reasons to rebel and improve the security situation, according to Jones.

The conference was held in McNally Amphitheater and ran about an hour longer than scheduled due to multiple questions and comments from audience members.