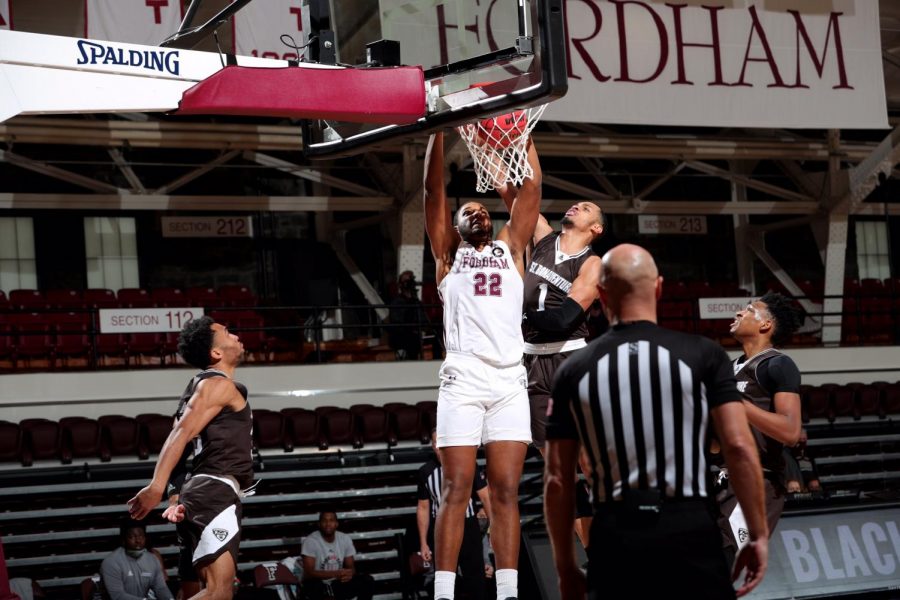 The Fordham men’s basketball team lost its second straight game on Tuesday afternoon, falling to St. Bonaventure University (SBU) by a score of 68-54. The win marks the 10th consecutive victory for the Bonnies against the Rams.

At first, it seemed like this game was going to be a shootout. The Rams and Bonnies went shot for shot through much of the first half. Ultimately, the two teams combined for 74 first half points, an unlikely occurrence considering Fordham’s notoriously slow pace.

First-year guard Yame Butler, Fordham College at Rose Hill (FCRH) ’24, made his first start for the Rams this season. He left his mark from the jump, scoring the first six points for Fordham. Four of those points came from a single play in which Butler was fouled on a three-point attempt that he converted. He then hit the free throw to complete the four-point play.

With 5:56 left in the first half and the score tied at 27, St. Bonaventure guard Kyle Lofton, SBU ’22, committed a technical foul before losing his composure and kicking a chair on the sideline. This outburst could have presented an opportunity for the Rams, but they were not able to pull away from the Bonnies.

Despite not taking advantage of the technical foul late in the first half, the newfound offensive output allowed Fordham to stay in the game, leaving the floor at half with the game knotted at 37-37.

The second half did not treat the Rams as well as the first. After posting an astonishing 37 points in the first half, Fordham could only muster 17 in the second. The Bonnies, on the other hand, did not slow down after the midway point. St. Bonaventure’s leading scorer, Jaren Holmes, SBU ’22, shouldered the offensive load, scoring 26 points on a highly efficient 10-for-16 from the field.

Holmes’ efforts were complemented by his fellow starters, Lofton and Jalen Adaway, SBU ’22, who combined for 28 points. Of those 28 points, 20 came in the second half. Their performances played a large role in the lead the Bonnies were able to maintain for much of the second half.

Conversely, the Rams struggled. Rose and Joel Soriano, FCRH ’23, combined for 14 of Fordham’s 17 second half points, including the first 12 of the period. Beyond those two players, the Rams failed to produce.
Fordham struggled to corral defensive rebounds throughout the game, perhaps the main culprit behind the Rams’ defensive struggles.
In the second half, Fordham only shot 27.3% from the field, a stark contrast to its first half performance. Additionally, Fordham shot 13 three-pointers, converting on only two of them. Ultimately, the combination of poor offense and foul trouble (Soriano got his third foul with 15:21 left in the second half) left the Rams unable to keep up with the potent St. Bonaventure offense.

Despite the loss, this game marks one of the best offensive games for the Rams this season.

“We got great shots on the perimeter,” Head Coach Jeff Neubauer noted after the game. “Offensively, the ball moved and we played our best at that end.”

He also went on to comment on St. Bonaventure’s offensive rebounding.

“Bonaventure got half of their misses back,” Neubauer claimed. “When you have 31 shots then go get 15 of them … it’s tough to win.”

Fordham struggled to corral defensive rebounds throughout the game, perhaps the main culprit behind the Rams’ defensive struggles.

This loss brings Fordham’s record to 1-4 for the season. The Rams will look to find a balance on the offensive and defensive ends on Sunday, Jan. 17, when the University of Massachusetts Minutemen visit Rose Hill for an afternoon game.