Fordham Women’s Basketball Worn Down Late in Loss to UMass, 61-56 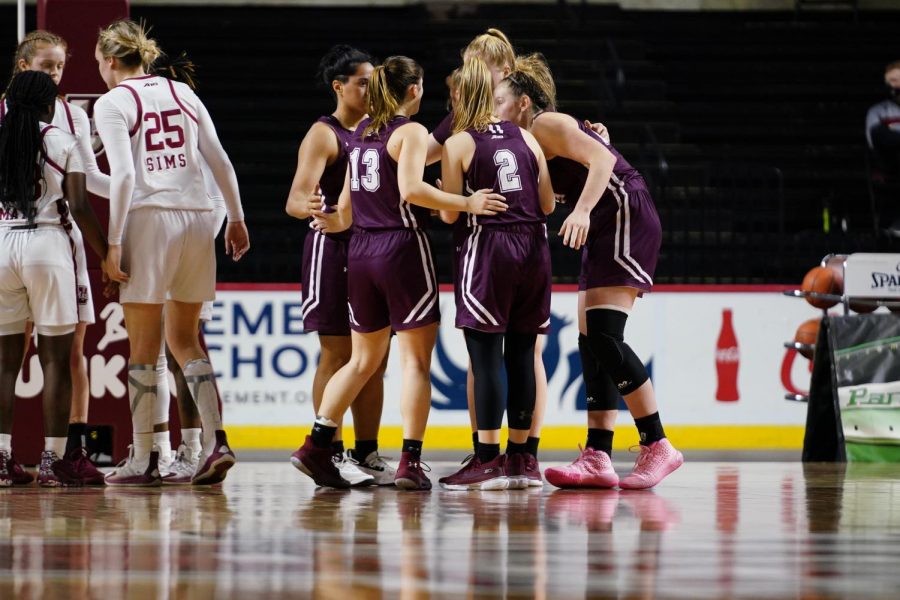 The Fordham women’s basketball team enters a huddle in its game against UMass, a day on which the Rams struggled.

The Fordham women’s basketball team suffered its third loss of the season Sunday afternoon, falling 61-56 to the University of Massachusetts (UMass) Minutewomen despite leading at halftime. The defeat snapped a four-game winning streak for the Rams and halted their upward climb in the Atlantic 10 (A10) Conference standings.

Following a flagrant foul late in the second quarter, leading scorer Anna DeWolfe, Fordham College at Rose Hill (FCRH) ’23, seemed to struggle offensively in the third quarter and much of the fourth. Meanwhile, the team also committed a combined 23 personal fouls, its highest total all season.

“Tough loss against a tough UMass team,” head coach Stephanie Gaitley said. “The kids played hard. We need to learn from this and be ready for our next road game at Dayton.”

Prior to Sunday’s game, the Rams and Minutewomen had already established themselves as contenders in the A10 conference. Both teams held 3-1 conference records and momentum on the season, with Fordham winning every game on its schedule since Dec. 22 and UMass coming off an impressive 82-61 victory against Davidson University on Jan. 8.
Unlike many games this season, Fordham’s early start wasn’t a product of DeWolfe’s elite shooting, as five different players scored in the first quarter.
The Minutewomen had to fight harder to earn their victory against the Rams, however, as the women from the Bronx proved their mettle from the opening tip. After allowing a basket 18 seconds into the game, Fordham went on an 8-0 run over the following three minutes. The teams exchanged baskets for much of the remainder of the quarter, and through 10 minutes, the Rams led 18-11.

Unlike many games this season, Fordham’s early start wasn’t a product of DeWolfe’s elite shooting, as five different players scored in the first quarter. Offensive rebounding also proved to be a valuable asset for the Rams, as the team scored eight points on second-chance opportunities in the first quarter alone.

However, despite gaining the early lead, cracks were already beginning to show for the Rams in ways that would hurt them later. The team committed five fouls in the first 10 minutes, with two each coming from Kendell Heremaia, FCRH ’21, and Kaitlyn Downey, FCRH ’22.

Fordham managed to keep its lead in the second quarter by shooting relatively well, particularly from three-point range. But the team committed six more fouls in 10 minutes to go along with six turnovers, and UMass began to gain momentum as the half winded down.

With 1:22 remaining, DeWolfe, who had already scored eight points, was struck in the face and ran into later in the same play. The one free throw DeWolfe made on the flagrant foul was the last Fordham score before the buzzer sounded, and two fouls in the bonus by the Rams in the final 90 seconds served as a poor omen going into halftime.

For a Fordham team that has gained a reputation for professionalism and consistency, its third quarter against UMass may stand as their worst 10 minutes all season. They still rebounded well, especially on offense, but second and even third chances weren’t enough. The team shot 2-for-17 in a seven-point quarter, and the Minutewomen didn’t have to do much to come back and secure a 39-38 lead going into the fourth.

Any late comeback attempt by Fordham was snuffed out by more sloppy play, as the team committed 10 fouls in the fourth quarter, a staggering amount that led to 10 made free throws for UMass.
Although Fordham’s shooting was inconsistent, it’s doubtful that the team would have struggled if not for 23 personal fouls and 17 turnovers.
After scoring just once in the first 16 minutes of the second half, DeWolfe caught fire late, scoring 10 points in the final three and a half minutes, but it wasn’t enough. Her final basket at the buzzer cut the Minutewomen’s lead to five for a 61-56 final score.

Between Downey and Megan Jonassen, FCRH ’23, the Rams represent the most fierce rebounding team in the A10 conference, as the pair accounted for a combined 24 of the team’s 44 rebounds Sunday. Despite having a difficult shooting day overall, DeWolfe still managed to score 21 points, though they could have been better timed.

Although Fordham’s shooting was inconsistent, it’s doubtful that the team would have struggled if not for 23 personal fouls and 17 turnovers. In past seasons, the Rams’ success has come from avoiding such errors, as the team has regularly ranked near the top of the A10 for turnover rate and fouls per game for many seasons.

Such mishaps have led to all three of Fordham’s defeats this season, and it’s unclear if the problem will persist as the season wears on. As the Rams prepare for a Jan. 16 matchup against Dayton University, the only certainty is that Gaitley and her players will work all week to improve themselves, and their track record in recent years makes that a very encouraging notion.