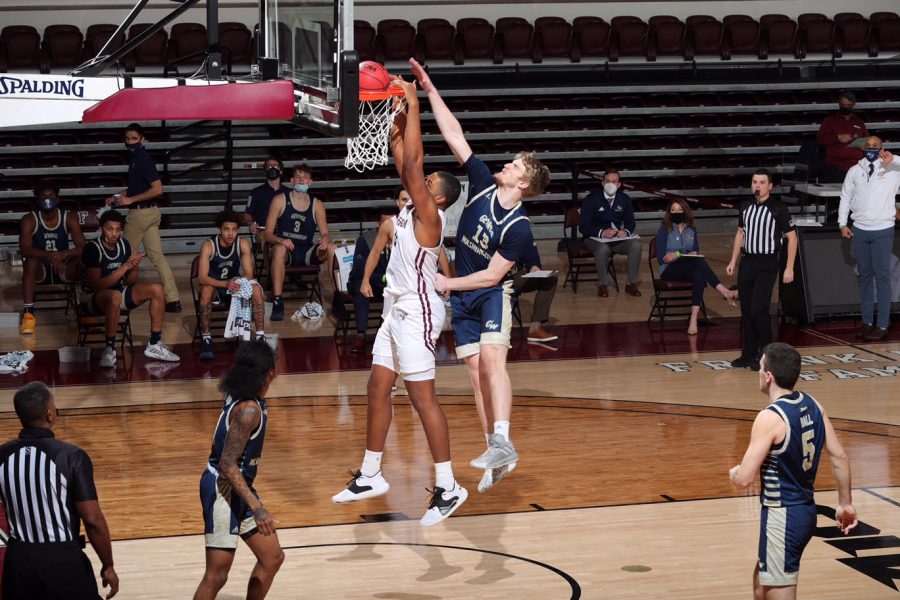 Joel Soriano, FCLC '23, dunks on George Washington University. It was not enough for the Rams to beat the Colonials, who came out victorious with 71 points to the Rams' 47.

It had been 294 days since the Fordham Rams last took the court. Their opponent that game was a familiar foe. The Rams kicked off their 2020-21 season on Dec. 30  against the George Washington Colonials but the results were not the same as last year, as the team fell 71-47 in a disappointing start to the season.

George Washington came into this matchup with a much shorter break: 286 days shorter, to be exact. The varying comfort of being on a basketball court was immediately apparent at the Rose Hill Gymnasium on Wednesday as the Rams struggled to get anything going during their season-opening defeat to the Colonials.

Fordham looked to once again take down a George Washington team that was responsible for one-third of their victories last season, including their final victory of the shortened 2020 season. However, the Colonials team they faced today seemed far more improved than the one they convincingly defeated three times last year.
As the half progressed, George Washington started to come into its own, leaving the rusty Rams in the dust.
The long break for Fordham was evident throughout the game but especially in the early portion of the matchup. The Rams’ offense hasn’t been their strong suit in recent years, but they appeared especially lackluster in the season opener, as the team missed nine of its first 10 shots and was held scoreless for the first three and a half minutes.

The opening 10 minutes were not particularly exciting; however, as the half progressed, George Washington started to come into its own, leaving the rusty Rams in the dust. At the midpoint of the first, the Colonials were already ahead 13 points while Fordham struggled to surpass a 17% field goal percentage.

Forward Jamison Battle, George Washington  ’23, was the focal point of the Colonials’ offense, nearly outscoring the Rams’ offense in the first half with 17 points of his own to start the game.

The end of that opening half could not come fast enough for Fordham, as they ended up shooting an abysmal 22%, making just 7 of their first 32 attempts. The Rams trailed 38-20 after the first 20 minutes, hoping for a second half turnaround to make their opening day matchup somewhat competitive against their Atlantic 10 rival.

Fordham started off the second half fast and seemed more comfortable on the court. However, an early George Washington timeout stalled the Rams’ offense and shifted momentum back into the hands of the Colonials.

Following that short spurt of early energy, the second half only showed slight improvements on the offensive side for the Rams as the team shot an improved, but still poor, 34.6% from the field, leading to a 27.6% shooting night overall for Fordham.

The biggest statistical discrepancy between the two sides, excluding points, was the assist numbers. George Washington moved the ball extraordinarily well, and it showed on their final line as they put up an impressive 71 points on 18 team assists compared to just six by the Rams. The Rams had good ball movement, and after the game, Coach Jeff Neubauer spoke about how proud he was of the team’s decision-making.

“We found some good ones (shots), but didn’t convert,” Neubauer said.
The Colonials cruised to a comfortable victory over a Fordham team they struggled to beat all of last season.
The good opportunities he spoke of are positive in the grand scheme of things, but this unselfish style of basketball that teams constantly search for will not translate over to the stat sheet or even the scoreboard when the team shoots below 30% from the field and only 2-14 from the three-point range.

The two-headed monster of Battle and guard James Bishop, GW ’23, from George Washington combined to match the Rams’ point total of 47 for the game as the Colonials cruised to a comfortable victory over a Fordham team they struggled to beat all of last season.

In an off-season where the Rams had a lot of time to work on their personal game prior to their first matchup, some of their star players took the time to develop into entirely new assets. The improved game of Joel Soriano, Fordham College at Rose Hill ’23, was one of the bright spots for this Fordham team’s opening game. The sophomore phenom who took over the starting role last season and is turning into one of the team’s best young stars put his improved skill set on display early. With a dominant 12-point, 12-rebound double-double, Soriano was certainly a catalyst of the team’s offense and someone who helped keep this game as competitive as it could have been.

After the disappointing introduction to the 2020-21 Atlantic 10 Conference, Neubauer described today’s performance as only he could: “We really didn’t understand basketball very well today.”

Hopefully their two-day break will treat them better than their last 294 days off. The Fordham Rams look to bounce back Saturday, Jan. 2, as they travel to Philadelphia to face La Salle University.