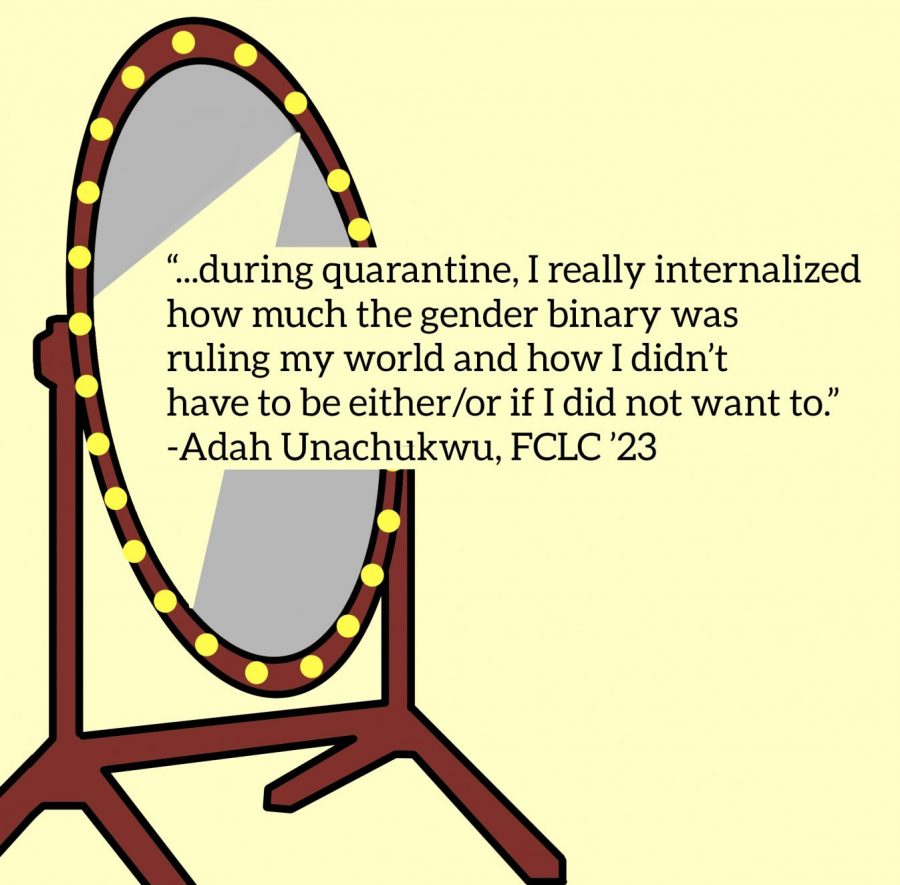 It has been almost a year since COVID-19 first reached the United States, locking people into their home. While many parts of the country are no longer taking the same precautions as before, this pandemic has certainly given the word “isolation” a whole new meaning. And for many people, including some Fordham students, isolation has given the word “gender” a whole new meaning.

In the past months, I hear more and more people around me asking the question, “What is gender?” Since that is a loaded question, they often brazenly conclude that “gender isn’t real” in an effort to bundle up the elements of the Pandora’s box they’ve opened up, which is completely fair.

The question of gender is messy and complicated and confusing. It is something a lot of us took to be so simple prior to entering college — we didn’t struggle with questioning it and we certainly didn’t have the luxury of challenging it.
“Being remote and living in a suburb where fitting in, especially in appearance, is a form of survival that really challenged my idea of what gender identity is.” Gabrielle Abrazaldo, FCLC ’23
But now that we are in college, growing up and reflecting during this past year of isolation, we have to ask ourselves what it means for gender to not be real? Does gender have any validity and, if so, where does it lie? What role does gender play in each of our lives? And how has life during the pandemic, a life of increased isolation and decreased face-to-face interaction, affected the way people think about gender?

These, just like the umbrella question they fall under, are all loaded questions.

Although this does not nearly cover all the challenges of gender in our current society, I interviewed four Fordham students to get their insights on their shifting relationships with gender.
On Self and Gender Identity
“During quarantine, I really internalized how much the gender binary was ruling my world and how I didn’t have to be either/or if I did not want to.” Adah Unachukwu, FCLC ’23
Gabrielle Abrazaldo, Fordham College at Lincoln Center (FCLC) ’23, had an internship over the summer that led her to explore the concept of gender more deeply.

“I had been hopeful about returning to New York and being able to explore new forms of expressing gender identity through fashion,” Abrazaldo wrote. “But being remote and living in a suburb where fitting in, especially in appearance, is a form of survival that really challenged my idea of what gender identity is.”

For her, gender goes beyond clothes and presentation. However, how she presents herself and how she is perceived by others has still had a large impact on her own gender identity.

She said that being asked her pronouns have always been “scary” for her: “Being asked what my pronouns were always was a bit stressful for me because I felt the need to say female.”

Adah Unachukwu, FCLC ’23, found that taking life at a slower pace made her question her entire sense of self.

“My dreams and aspirations aren’t the same and even my ideal body type isn’t the same,” Unachuku wrote. “I have always been proud to be femme presenting. But I had this hidden desire to be more masculine at times and I used to think that it was my ‘tomboy side’ resurfacing or my need to project heteronormative ideal into my sapphic relationships,” she continued. “But during quarantine, I really internalized how much the gender binary was ruling my world and how I didn’t have to be either/or if I did not want to.”
“What I realized was that gender was a lot more nuanced than I thought it to be, and I was sacrificing my own comfort for the sake of other people’s comfort.” Gabrielle Abrazaldo
Lu Aubin, FCLC ’23 and a trans woman, has been grappling with gender far before this disease hit.

Aubin wrote, “performative gender acts and expressions were performed for myself, and I was given space to be really really close to myself.”
On Presentation in Isolation
For Abrazaldo, not interacting with people face to face helped alleviate the pressure she felt to be female. She said, “being behind a screen, the idea of needing to conform to a gender normative aesthetic to be validated was challenged.”

She added, “What I realized was that gender was a lot more nuanced than I thought it to be, and I was sacrificing my own comfort for the sake of other people’s comfort.”

Unachukwu, describes their relationship with gender to be most noticeably different when she is around others: “when I’m with other people, I feel a need to be either more feminine or masculine. It’s like code switching, but with my gender. But during quarantine, I didn’t have to do that all the time and I could really just be more present with myself.”

Aubin noticed that with isolation and mask-wearing, her face was almost always concealed: “hardly did it matter if I shaved or not – but I still did. Moments like these are a recent luxury, discovering what roles of gender I play for others and what roles I play for myself.” This, for Aubin, was reassuring.
On the Fluidity of Gender
“My gender with my family is slightly different than my gender with friends and with myself. Quarantine was an intense time because my life and my gender was relatively unchanging.” Lu Aubin, FCLC ’23
Concluding a strenuous process of questioning gender identity can be difficult, but for Abrazaldo, saying that gender is fluid is good enough for now. “I came to the realization that gender is a lot more fluid than we often think of it to be, just as sexuality is. We tend to think of it as a process, with a start and a finish, when that isn’t always the case. Sometimes it’s just a journey without an end, and that’s okay — that’s for the individual to decide.”

Unachukwu came out as she/they at the end of quarantine. Individuals who identify as she/they identify as a woman and as non-binary, using she/her/hers and they/them/theirs pronouns interchangeably. Depending on the individual, they may have a preference for one group of pronouns over the other.

After using she/they pronouns, Unachukwu felt “more accurately represented” the space they “wish to take up in the world” and how she wishes to present.

Unachukwu came to a similar temporary conclusion as Abrazaldo: “One thing that has really comforted me is that gender and its expression can be dynamic, and I can change my pronouns and label at will.”

However, Aubin actually found comfort in a totally contradictory idea. Having read “DarkMatter: Be the Kill-Joy,” an interview with Alok Vaid Menon and Janai Balasubramanian in Guernica Magazine, Aubin explored the “model for gender as being created dependent on our interactions and conditions.”

She noticed how this model applies to herself. “My gender with my family is slightly different than my gender with friends and with myself. Quarantine was an intense time because my life and my gender was relatively unchanging.” This consistency came in the form of her identity as a woman, which also brought a new level of validation in her own identity.

For Lu, the validity of her gender, whether in her shaving or her shifting interactions with different groups of people, was only confirmed during a period of isolation and Zoom classes.
On Arriving at Conclusions
“One thing that has really comforted me is that gender and its expression can be dynamic, and I can change my pronouns and label at will.” Adah Unachukwu
There are no good universal answers to any questions regarding gender. I knew that already. Everyone’s relationship with gender is a little bit different. That does not necessarily mean it is real or not real: Whether gender is real to you is for you to decide.

However, it does exist as a social construct that we all have to navigate within. For genderqueer individuals, having the luxury of time and self-exploration has transformed how comfortable or not comfortable they are with their gender identity.

For many others, exploring gender is a journey they have only just begun or something that sits far in the future. And even if you have always felt very comfortable where you have been placed on the gender binary, know that not everyone enjoys that simplicity in their relationship with gender.

No matter how real gender is or how fluid we see gender identity as, we could at least agree to respect people’s pronouns, whether or not they are the same pronouns they used a year ago, a week ago or even an hour ago. And if they change again? Continue respecting that. The only people who get to decide when their pronoun changes are the individuals themselves.