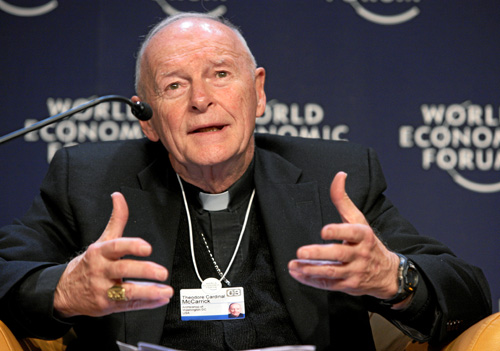 In 2018, Pope Francis called for an investigation on ex-Cardinal Theodore McCarrick. On Nov. 10, the Vatican released its report on his abuse of power and of minors and priests.

The Vatican released a 450-page report on Nov. 10 about Theodore McCarrick, ex-cardinal of the Catholic Church and Fordham College at Rose Hill ’54, regarding his abuse of power and authority, as well as his abuse of minors, seminarians and priests.

The new report is the result of Pope Francis’ call for a full investigation into McCarrick’s actions in October 2018. Relying primarily on official Vatican documents and correspondences, as well as witness interviews, the report covers McCarrick’s tenure as a priest, bishop, archbishop and cardinal over the past 50 years.

In 2019, McCarrick was defrocked, meaning that he is unable to perform the pastoral and ministerial duties of a priest or to marry, as a layperson — someone not ordained as a priest — would.

Fordham rescinded McCarrick’s honorary degree and has changed the name of its fellowship for a graduate program in International Political Economy and Development to the John Fidelis Hurley, S.J., Fellowship.
Rise to Power and First Allegations
According to the Vatican’s report, McCarrick was appointed as an auxiliary bishop in New York in 1977 under Pope Paul VI. He was then elevated to the seat of bishop of Metuchen, New Jersey, in 1981, and archbishop of Newark, New Jersey, in 1986 under St. John Paul II.

McCarrick was “lauded as a pastoral, intelligent and zealous bishop” and no credible information was present to suggest any misconduct, the report stated. He became the archbishop of Washington, D.C., in 2000 and created cardinal in 2001.

When he was elevated to cardinal, according to the introduction of the report, there were four general allegations against McCarrick.

Anyone who testified against McCarrick remained anonymous, and the report labeled the priests as Priest 1, Priest 2, and so on, for clarity.

First, “Priest 1,” a former Metuchen priest claimed that McCarrick had performed a sexual act in front of him with another priest, and he attempted to engage in sexual activity with Priest 1 in 1987.

Third, McCarrick “was known to have shared a bed with young adult men in the Bishop’s residence in Metuchen and Newark”; and last, he was similarly known to have shared a bed with adult seminarians at a beach house in New Jersey.
“Given my circumstance as a seminarian under Cardinal McCarrick, I never felt able to resist his requests, and so I often complied.” Priest 2
In the report, Vatican officials state that John Paul was convinced of McCarrick’s innocence in the above matters due to a last-minute letter declaring his lack of wrongdoing.

Explaining the pope’s decision, Marc Cardinal Ouellet referenced the former pope’s friendship with McCarrick, as well as his youth spent in communist Poland, where priests would be wrongly accused of sexual abuse. To weaken the church, the secret service would denounce priests, undermining their reputations; “this left a very strong impression on him,” Ouellet, the prefect of the Congregation for Bishops, said.

The report states that, through information known now, three of the four bishops who reported to the nuncio provided incomplete information about the alleged misconduct, which then influenced the pope to approve McCarrick’s rise to the position of cardinal.
McCarrick Under Benedict and Francis
McCarrick served as cardinal and archbishop of Washington from 2000 to 2006. Pope Emeritus Benedict XVI, John Paul’s successor, knew as much of McCarrick’s actions as his predecessor did.

The report states that Benedict did not prevent McCarrick from public ministry, citing that there were no credible allegations of child abuse; the “allegations of misconduct with adults related to events in the 1980s; and there was no indication of any recent misconduct.”

McCarrick remained in active public ministry, traveling the world for the U.S. Department of State or otherwise with Vatican approval. Toward the end of Benedict’s papacy, Archbishop Carlo Maria Viganò, the apostolic nuncio to the United States at the time, learned of Priest 3, who brought allegations against McCarrick of sexual misconduct that occurred in 1991.

Ouellet instructed Viganò to perform an inquiry into the allegations, but the nuncio never followed through, failing to discover the credibility of Priest 3. McCarrick continued his public ministry, though to a lesser extent due to his age — he was 83 years old in 2013.

When Pope Francis was elected in 2013, according to the Vatican report, he saw no need to change what his predecessors had decided about McCarrick; until 2017, he claimed he was only informed of the allegations and rumors that John Paul and Benedict had dismissed.

After the first credible accusation that McCarrick had sexually abused a minor, a claim received by the Archdiocese of New York on June 8, 2017, Francis instructed Timothy Cardinal Dolan of New York to begin an investigation, and he asked McCarrick to resign from the College of Cardinals, and he was “dismissed from the clerical state.”
Findings From the Vatican Report
The report revealed the witnesses of 17 priests and laymen who interacted with McCarrick as late teenage or young adult men in some capacity during his time as bishop, archbishop and cardinal. Their testimonies shared certain commonalities: They claimed the ex-cardinal abused his authority to gain access to young men and boys, who in turn felt “powerless to object” to his advances.

“Given my circumstance as a seminarian under Cardinal McCarrick, I never felt able to resist his requests, and so I often complied,” Priest 2 said in the report.

The report also found that McCarrick would befriend families and especially the adolescent boys, insisting that they call him “Uncle Ted.”
“He may be involved in sex scandals at any moment.” Nuncio Pietro Sambi
In an open letter posted online and cited in the report, Richard Sipe, a former Benedictine monk and psychotherapist who focused on clerical sexual abuse within the Church, wrote that he had McCarrick’s “correspondence where he referred to these men (certain priests and seminarians) as being ‘cousins’ with each other.”

The witnesses also mentioned that they felt a “sense of ‘gratitude’” for McCarrick taking them on trips to foreign countries and introducing them to important leaders, including the pope.

McCarrick would isolate his victims from supervision and take them to his Bishop’s Residences, his own apartment, or his beach house. Some reported that he provided underage boys with alcohol.

At the end of the report, many victims stated that they previously felt powerless to report any misconduct because they feared being “disbelieved” or that they “would be retaliated against if they came forward.”
Results of the Allegations, 2008-2020
In the early 2000s, McCarrick lived near the seminary by Seton Hall University and at Redemptoris Mater Seminary in Hyattsville, Maryland, even while Nuncio Pietro Sambi wrote to other Vatican officials that “he may be involved in sex scandals at any moment.”

In response to these scandals and accusations, McCarrick repeatedly swore on his oath as a bishop and on God that he had never had any sexual relations with any man, woman or child.

In 2017, the allegations brought against McCarrick from the 1970s were unanimously found substantiated and credible by the United States Conference of Catholic Bishops. These were brought to light in 2018, per archdiocesan policy. Further allegations emerged from 17 witnesses in 2019 and 2020.

According to Catholic News Agency, after Sambi asked McCarrick to move out of Redemptoris Mater Seminary, “An emotional McCarrick told Sambi that because Priest 1 was 25 at the time of the allegations, what had happened was not a crime, and that his continued pursuit of the allegations seemed to be a grab for money.”

The Church has focused on exposing the illegal abuse of minors by priests, but the abuse of adults, especially seminarians and priests, has been brought to light in McCarrick’s case and may lead to greater transparency within the Church about similar allegations.