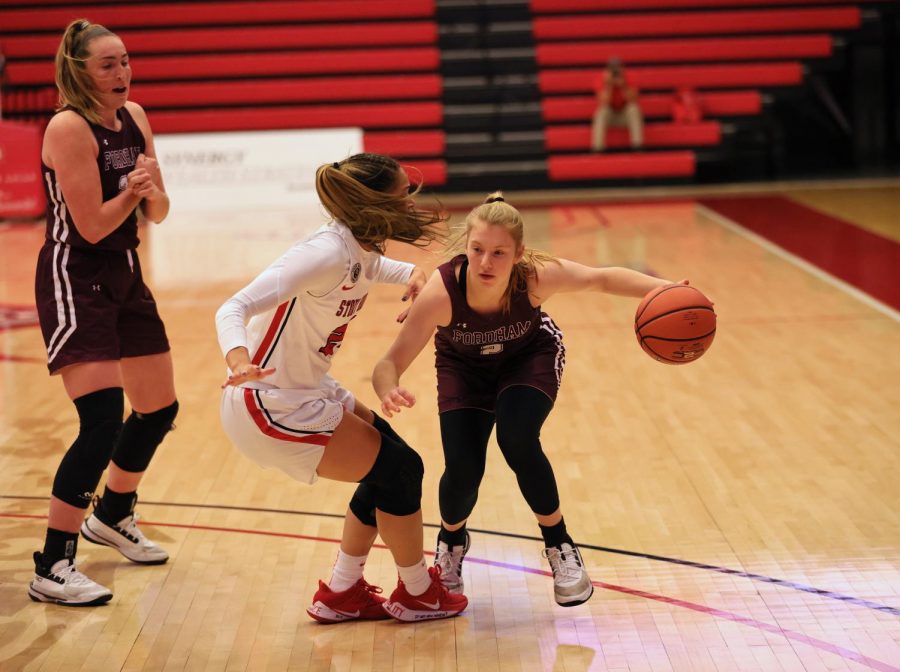 Sophomore Anna DeWolfe, FCRH ’23, pictured holding the ball, scored 25 of Fordham's 62 points in the Rams' first game of the season.

An eight-month period without Fordham sports has finally ended. In its season opener, Fordham women’s basketball nearly blew a large lead but hung on to defeat the Stony Brook University (SBU) Seawolves, 62-58.

In some ways, this victory is a continuation of the team’s previous success. Since Stephanie Gaitley was hired as head coach in 2011, the team has become a mainstay in the upper echelons of Atlantic 10 (A10) women’s basketball. The Rams’ victory against a stout opponent like Stony Brook, reigning finalists in the America East conference, sets the tone for another successful season in the Bronx.

However, this game also marked the beginning of a new, hopeful era for the program after several months of misfortune. First, a defeat on March 7 against Virginia Commonwealth University in the 2020 A10 Tournament semifinal ended its run for a second straight conference title. Then, the team’s berth in the Women’s National Invitational Tournament was revoked when the tournament was canceled due to the COVID-19 pandemic. To complicate matters, after a summer in isolation, star player Bryson Cavanaugh, Fordham College at Rose Hill (FCRH) ’21, announced in October via Instagram that he would not be returning to play for Fordham in the 2020-21 season.

In a pandemic, without its leading points scorer and following a disappointing loss the previous year, the Rams took the floor against Stony Brook with a different mentality. For the first time in a very long time, they had something to prove. Among a sea of empty bleachers and masked sideline officials, they had to reestablish themselves as a team to watch.
“We knew we had to take them out of their comfort zone and limit second chance opportunities.” Kaitlyn Downey, FCRH ’22
To begin the first quarter of their 2020-21 season opener, Fordham jumped out to a 7-0 lead in the first two minutes, forcing Stony Brook to take an early timeout. After so much time away from the court, the team emerged with energy and momentum. The Seawolves managed to gather themselves and get back into contention, but as the first buzzer sounded, the Rams still held a slim lead, 17-14.

Fordham was playing well in some respects. Lead returning scorer Anna DeWolfe, FCRH ’23, was left wide open on several occasions and capitalized on that opportunity to score eight points, but the team had its incidents early on nonetheless.

In her 100th college basketball game, Kendell Heremaia, FCRH ’21, committed two fouls and suffered two turnovers in the first six minutes of play. Normally one of the team’s key contributors, she was quickly subbed out and didn’t return until the second half. Heremaia wasn’t alone, however, as the team recorded 19 turnovers over the course of the game, something Kaitlyn Downey, FCRH ’22, chalked up to early season jitters.

“In practice we emphasize the importance of taking care of the ball and we are known for low turnover counts, so we are looking to improve this in the future,” Downey said.

With five team fouls, a bevy of turnovers and a benched starter, it seemed like the Rams would have to compete tooth and nail with the Seawolves for the next three quarters. However, if the first quarter revealed the team’s weaker points, the second demonstrated one emphatic strength on offense.

Downey said that the team’s efficiency on offense comes from “getting everyone involved and honing in on each one of our particular strengths.” In the second quarter, there was only one strength that mattered as the team made way for DeWolfe.

In the 10 minutes before the half, the sophomore guard from Maine took over for Fordham offensively. In a quarter where the Seawolves scored 11 points, DeWolfe scored 15 on her own, making six of eight shots from the floor and making two of three free throws. She also added a steal and an assist in a star-studded quarter that extended Fordham’s lead at the end of the half, 39-25.

If DeWolfe had been the only eligible scorer for Fordham, her 23 points would have been nearly enough to lead Stony Brook anyway, such was her dominance early on. It’s clear now that she’ll be a new leader on the floor for a very seasoned team. However, for a talented opponent like the Seawolves, such an offensive strategy could only work for so long. As the Seawolves reemerged for the second half, it was clear that they had made the necessary adjustments.

Fordham’s leading scorer was completely stifled in the second half and only scored two more points in the final 20 minutes. Meanwhile, Heremaia reentered the game but almost immediately committed another pair of turnovers and fouls and had to be taken out. As Stony Brook’s defense grew stouter, the Rams’ lack of depth off the bench began to take its toll as well.

Following a free throw by Downey early in the third quarter, the Seawolves went on a 20-4 run that went well into the fourth quarter. The Rams were vastly outplayed during that stretch, committing eight turnovers and scoring two times on 11 attempts from the floor. With six and a half minutes remaining in the fourth, what was once an 18-point lead for Fordham had now dwindled to a single point, 50-49.

Following this terrible stretch, Fordham finally found its offensive footing again and the teams began exchanging baskets. The Rams were still clinging to their lead, 55-53, as Sarah Karpell, FCRH ’23, brought the ball up the court with two minutes remaining.
“That was a great win for a lot of reasons – winning on the road and stopping their (win) streak, coming back after building a lead, seeing different kids stepping up to the challenge.” Stephanie Gaitley, Fordham women’s basketball coach
Despite running the floor for the entire game, Karpell’s role on offense was purely supportive for most of the game. Up until this moment, her five assists equaled her five points, and after a while, Stony Brook players began to give her large amounts of space under the assumption that she wouldn’t shoot. Even then, she had only attempted two three-pointers and missed both.

On this possession, she passed it off again and cut right to the corner. This time, however, the ball came back to her as Downey failed to find a lane to the basket and kicked it back out to the perimeter. In a two-point game, Karpell took her third three-point shot of the game and drained it, putting the Rams back out in front by five, 58-53.

Stony Brook continued to compete as time dwindled, but Karpell’s score put the game out of reach and led Fordham to a 62-58 victory. In the 2019-20 season, the Seawolves went 15-0 on its home court and hadn’t lost in the Island Federal Arena since Jan. 23, 2019. The home court advantage was obviously diminished by the absence of fans, but a road victory for the Rams is valuable nonetheless.

While DeWolfe’s 25 points came in sudden bursts, Downey’s presence was more constant and kept the team in contention at times. In addition to 15 points, the second highest total on the team, she also had 20 of Fordham’s 39 rebounds, a significant statistic that Downey believes gave the team an edge.

“Last year, SBU led the America East Conference in O-boards and out-rebounded their opponents by about 10 each game,” Downey said. “We knew we had to take them out of their comfort zone and limit second chance opportunities.”

For Gaitley, her 10th season at Fordham could not have begun with a better result. Her team made up for errors and fatigue with a good deal of courage, staying in the game even after they had lost all momentum. She was very happy with her team’s performance after the game.

“That was a great win for a lot of reasons – winning on the road and stopping their (win) streak, coming back after building a lead, seeing different kids stepping up to the challenge … Great win for the Rams!” Gaitley said.

Fordham’s next game against Manhattan College on Dec. 2 has been canceled after a member of the Jaspers program received a positive COVID-19 test and forced the team to enter quarantine on Nov. 25. The Rams’ next contest will now take place on Dec. 5 against Quinnipiac University.

On a campus that wasn’t fully coeducational until 1974, the women’s basketball team is one of the few athletic programs that’s earned the fans’ respect in recent years. After an eight-month hiatus, those fans deserved an honest performance to mark Fordham’s return to athletic competition, and to that end, there is no better representative to usher in this new, uncertain season.