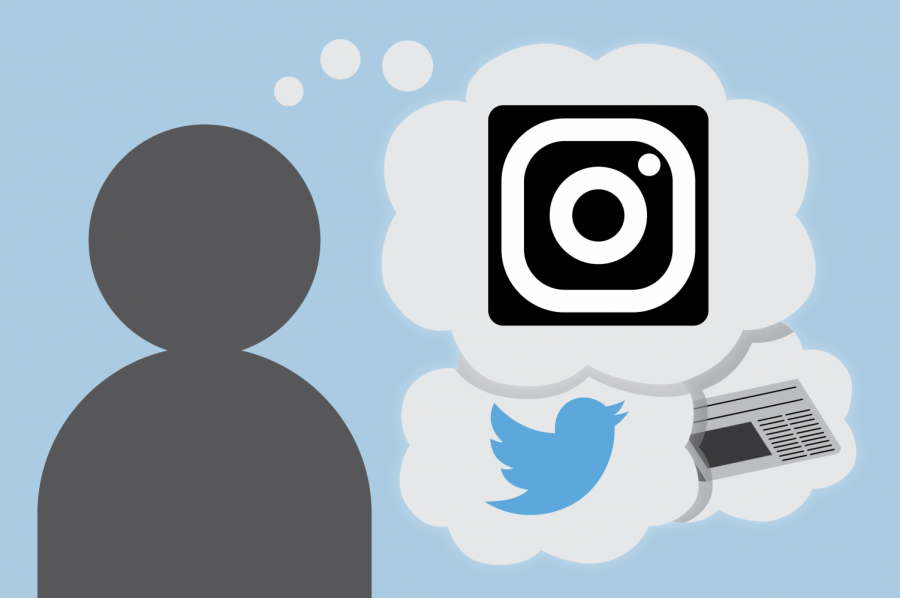 Students are increasingly turning to Fordham meme accounts as a way to receive updates about the university.

By CHLOE ZELCH and STEPHEN BRAGALE

News satire was first popularized by “The Daily Show” when a survey in 2004 found that the show’s viewers were more informed about political issues than people who read newspapers or watched televised news.

In recent years, “Last Week Tonight” has also been recognized for “the John Oliver effect,” a term for the show’s ability to create awareness and spark change concerning political issues with its comedic journalism.

News satire among Fordham Lincoln Center students is now becoming more popular with meme pages like @lc_sinners and @lowensteamy_memes taking on a prominent role in the community.
Some of the accounts shared updates from RAs that gave me a better idea of what things were looking like on campus. Maria Tergis, FCLC ’22
@lc_sinners
“LC Sinners for the win!” Panharidth In, Fordham College at Lincoln Center (FCLC) ’22, said. In is one of the growing numbers of Fordham students who looks for a dose of comedy and campus culture from student-run meme pages on social media.

@lc_sinners began as a meme account, but since the COVID-19 pandemic it has taken on a new, expanded role as a student news source with almost 4,000 followers. The account currently functions as an outlet for Fordham students to express opinions and share news.

Some of the earliest news-related posts on @lc_sinners were critical of Fordham’s response to COVID-19. The page posted a screenshot of an email that had been sent to the entire Fordham community about the suspension of face-face instruction on March 9, spreading awareness about the university’s decision.
I think what’s so remarkable about LC Sinners is that it is a meme page turned advocacy page because of the amount of student confessionals and eyewitness videos they post. Panharidth In, FCLC ’22
Later that day, the page parodied Fordham’s mass email format, posting a meme joking that a trip to a local Bronx sports bar’s bathroom past 2 a.m. would render someone “immune from the coronavirus.”

@lc_sinners also documented the unsafe activities of some Fordham students during the pandemic, such as footage of over 100 Rose Hill orientation leaders gathered together on Aug. 20, a post that gained over 800 likes.

“I think what’s so remarkable about LC Sinners is that it is a meme page turned advocacy page because of the amount of student confessionals and eyewitness videos they post,” In said.

The many student accounts that @lc_sinners has posted have not all been credible. In acknowledged some doubt about the merits of statements posted on @lc_sinners. “I’m not sure I would consider it a news source, but maybe an opinion/eyewitness confessional source,” he said. “I always question how much of the posts are regurgitated from the University’s statements and how much opinion is added to it.”

A large volume of these posted DMs can be traced back to @lc_sinners receiving DMs from students telling the creators that their account was doing more harm than good in mid-October. Following these concerns, the account asked its audience if it should shut down the page. Ultimately, as expressed through the DMs the account posted on its story, the student body convinced @lc_sinners to stay on Instagram.

@lc_sinners has a history of controversy surrounding the validity of its posts, especially concerning COVID-19 policy violations. Rumors were circulating concerning members of the Fordham men’s basketball program testing positive for the coronavirus, with students and players allegedly putting coaches at fault for mismanaging safety procedures. @lc_sinners posted DMs confirming the coaches’ mistakes, alongside others claiming that no one was to blame.

“There were some things posted, particularly at the beginning of the semester/over the summer that I had not known about,” she said. “I felt some uncertainty about what Fordham was doing as regards the pandemic and COVID-19 guidelines leading up to this semester, and some of the accounts shared updates from RAs that gave me a better idea of what things were looking like on campus.”

@lc_sinners did not respond to The Observer’s request for comment.
@lowensteamy_memes
@lowensteamy_memes is less of a place to go for news, it’s where you go for jokes after you already know the news. Lily Carlisle, FCLC ’24
@lowensteamy_memes has taken a different approach from @lc_sinners and posts satirical “infauxgraphics” or multi-slide memes, as the creator explained in an anonymous interview.

The owner of the account said they post memes to create “a place to exercise our unalienable right to constantly mock and complain about our immediate surroundings like true New York liberal arts college students.”

@lowensteamy_memes, despite only having about 800 followers, has caught the attention of Dean of FCLC Laura Auricchio. In a satirical post that advertised a fake bake sale to solve Fordham’s budget deficit, @lowensteamy_memes peddled “Auricchi-O’s,” resulting in a friendly exchange with Auricchio and a rendered mock-up of a box of the fake cereal.

Auricchio commented, “Where do I sign up to bid on the Auricchi-O’s?” while @lowensteamy_memes responded, “For you? On the house” with a red heart emoji.

Now that my name is a meme, I feel that I have arrived. To help fill the budget gap, @FordhamNYC students are proposing a “bake sale and raffle.” Items on offer include: pic.twitter.com/Y75m4aWeQF

@lowensteamy_memes has taken a more satirical approach in its critique of Fordham, unlike @lc_sinners, which directly brings up concerns. Lily Carlisle, FCLC ’24, said that “@lc_sinners tells it like it is,” while “@lowensteamy_memes is less of a place to go for news, it’s where you go for jokes after you already know the news.”

Students like Tergis value these kinds of pages for the discourses they create.

“I think the meme and news pages help generate a conversation about what is going on at Fordham, as well as provide students with an outlet to express their frustrations and experiences with the administration,” Tergis said. “I also think that getting news from student run accounts might appeal to more people as it feels like the updates are coming from someone in the same position that they are in.”

Jordan Singleton, FCLC ’22, said that she doesn’t follow any of Fordham’s meme pages and fails to see them as a legitimate news source.

“I think a majority of students see news/meme pages as a harmless entertainment and a source of school spirit,” she said, “but a minority of students take the pages very seriously and try to gain recognition from their peers by appearing on these pages.”

The majority of the meme pages on the list of top Fordham meme accounts published by The Observer last year have been inactive for multiple semesters, leaving room for @lc_sinners and @lowensteamy_memes to succeed. It remains to be seen which direction their accounts take in the future, but Fordham students are certainly watching.