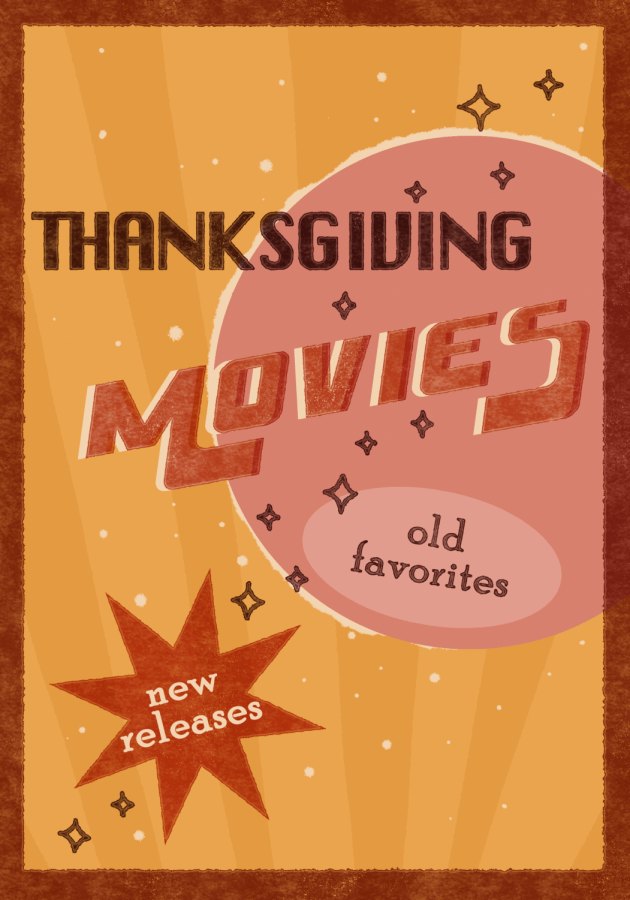 American football. Black Friday commercials. Charlie Brown specials. The Macy’s Thanksgiving Day Parade. Thanksgiving is celebrated with a variety of customs and meals within each household, but most likely, the television is always playing some program at some point during the day.

Outside of prepping and cooking the dinner, most people treat Thanksgiving as the calm before the storm of the holiday season. Because of this, over the years, Hollywood has transformed Thanksgiving into the kickoff of the holiday movie season known for long-awaited blockbusters, potential Oscar contenders and more.

Unfortunately, while some hoped the pandemic wouldn’t affect end-of-the-year festivities, cases are rising with lockdowns already established or on the verge of starting again. This has led most movie studios to pull out their scheduled releases and move them to next year in the hope of turning a profit, and in turn, has made people more fond of memories at the cinema.
Missing the Movies
Everyone has that one special movie theater-going experience, especially concerning big movie titles, and Rachel Di Stefano, Fordham College at Lincoln Center (FCLC) ’23, is no different.

In the past, Thanksgiving saw the release of popular films like “Doctor Strange,” “Thor: The Dark World,” “Tangled” and “Frozen.” One of the earliest movies that took part in this release strategy was Pixar’s 2004 film, “The Incredibles.” After finding out about this fun fact, students thought it made sense considering the family-centric theme and infamous dinner scene from the film.

She spoke with a contagious nostalgia: “I’d just come out of rehearsal and it was the beginning of the school holidays. It felt like freedom. One of the best memories I have from my high school days.”
Thanksgiving Themed Movies
Jumping from that flick, Gabriel Garcia, FCLC ’23, started brainstorming some popular Thanksgiving-themed films that he tries to watch every holiday season. He made sure to highlight “Free Birds,” the 2013 computer-animated film about two turkeys traveling back in time to prevent Thanksgiving. “I didn’t remember ‘Free Birds’ that well at first, but it’s so relevant. ‘Free Birds’ decolonizes the media we consume,” Garcia expressed.

People seem to jump to winter holiday specials quickly but fail to consider the array of Thanksgiving-themed films that channel the warm meals and family drama that the holiday is so iconic for. “Addams Family Values” can be considered a Halloween movie by some, but a large portion of the film is dedicated to a Thanksgiving play at a summer camp the Addams kids are sent to. However, a film that is undeniably suited for Thanksgiving week is “Paul Blart: Mall Cop.” After all, it takes place primarily in a fictional mall in West Orange, New Jersey, during Black Friday. What more could you want? For a more recent Thanksgiving classic — and an Oscar-nominated movie no less — is murder mystery “Knives Out,” which has a star-studded cast and layers of storytelling the family can analyze for hours at the dinner table.
“My brain is only supplying me images of Adam Sandler’s face.” Catherine Chung, FCLC ’23
When asked about Thanksgiving classics, Chung said, “My brain is only supplying me images of Adam Sandler’s face.” After reviewing movie release dates, she came to the conclusion that the culprit must be another Thanksgiving classic: Adam Sandler’s 2011 identical twin comedy, “Jack and Jill.” “I think part of Adam Sandler’s success as an actor is that you either hate him or you’re just not sure, so you keep watching to try and figure out what’s bothering you,” she said.
New Movies
Nevertheless, the world continues to spin on its axis, and movies continue to come out. With fewer advertising campaigns or social media chatter this year, many of these films have fallen under the radar. Not to mention, they aren’t the conversation-starting fanfare that usually arrives this time of year.

Instead of a highly anticipated sequel like “The Hunger Games: Catching Fire” or “Harry Potter and the Deathly Hallows – Part 1,” audiences can get excited for movies like Ron Howard’s “Hillbilly Elegy” starring Glenn Close and Amy Adams in what people are calling the worst work of their careers.

Before doing some research, most students couldn’t name a single movie coming out in the next two months or until the end of quarantine, a stark contrast to movie release chatter in the Lowenstein hallways or on Twitter in previous years. Chung discovered in shock, “There’s a new Croods movie coming out? During a pandemic?”

Beckett Schiaparelli, FCLC ’23, was more positive about this month’s prospects and mentioned the horror-comedy “Freaky,” one of the only new theatrical releases, from earlier this month. “Honestly, ‘Freaky’ looks kinda interesting to me,” he noted. “But I’m just in it for Vince Vaughn. I feel like he hasn’t been getting as many roles as he deserves recently.”

Recent release “Friendsgiving” starring Kat Dennings seems to be a worthwhile watch given the title and the relatability of catching up with hometown friends for students returning home or celebrating the holiday with college friends living off-campus. For fans of indie films from movie festivals, the recent release “Sound of Metal” with Rix Ahmed, the first Asian actor to win an Emmy for performance, is a tasteful look into the experiences of the deaf community. Another potential future awards contender is “Mank,” a black-and-white biopic that gives a behind-the-scenes look into “Citizen Kane,” which is also director David Fincher’s first feature since the aforementioned “Gone Girl.”

Other movies coming out in the holiday season include five new films from Steve McQueen, the first Black filmmaker to win an Oscar for Best Picture, and the Saoirse Ronan and Kate Winslet love story “Ammonite.”
As the weather grows colder and the days seem shorter from daylight savings but longer being away from campus, grab a loved one, a snack and pick a flick.
Beyond Thanksgiving, movie-lovers can also look forward to the release of “Wonder Woman 1984” on Christmas Day. Pixar’s latest animated feature “Soul” will also premiere on Christmas Day.

Film producers are also savvy enough to know just the kind of cheesy, mind-numbing content audiences want to relax and get a good laugh from, which is why Netflix just released “The Princess Switch: Switched Again,” the sequel to the identical twin centered film starring Vanessa Hudgens, this past week on Nov. 19.

From animated features to so-bad-it’s-good movies, there’s so much content out there to while away Thanksgiving break. As the weather grows colder and the days seem shorter from Daylight Saving — but longer being away from campus — grab a loved one and a snack and pick a flick. It doesn’t hurt to rewatch a comfort film or take a challenge and find a potential new favorite. Either way, with the help of streaming services and open theaters (that meet health guidelines), there’s still a chance to make brand new memories, despite the craziness 2020 has to offer. And, hey, if worse comes to worst, there’s always “A Charlie Brown Thanksgiving.”