The One With All the ‘Friends’ Thanksgiving Episodes Ranked

The classic sitcom’s 10 holiday episodes from worst to best 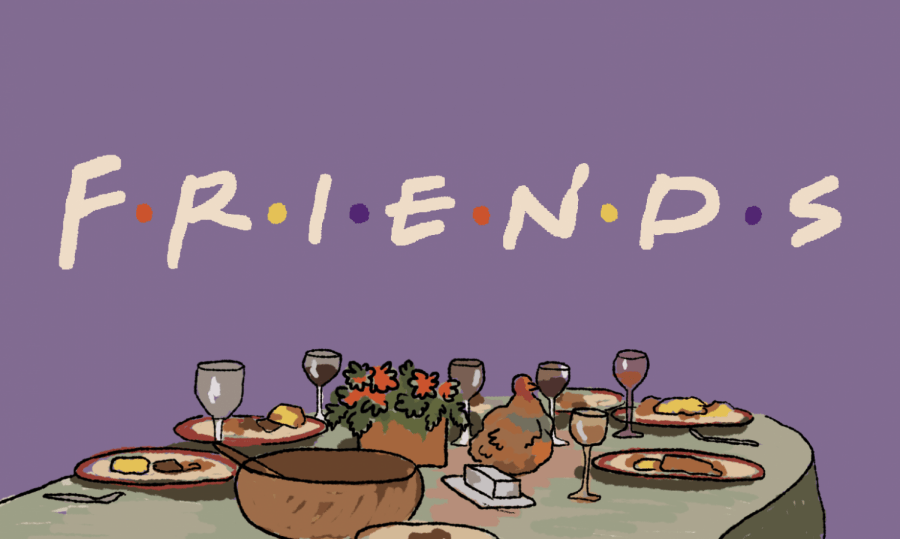 Though ranking the “Friends” Thanksgiving episodes is not the most original article idea out there, I could not resist the excuse to watch my favorite comfort-food sitcom instead of starting on all my assignments due right before break. For those who somehow clicked on this article not knowing what “Friends” is, it’s a sitcom with a simple premise: six 20-somethings — 30-somethings by the time of the show’s finale — navigate life in New York at the time in their lives when your friends are your family.

They are: Rachel (Jennifer Aniston), the once-sheltered, self-obsessed rich girl who grows into a caring and independent woman; Monica (Courteney Cox), the perfectionist and extremely competitive mom-friend who works as a chef; Phoebe (Lisa Kudrow), the eccentric masseuse with a heart of gold; Chandler (Matthew Perry), the sarcastic guy whose jokes don’t always land and who hates his high-paying job; Joey (Matt LeBlanc), the struggling actor who likes food and women a little bit too much for his own good; and Ross (David Schwimmer), the awkward paleontology professor and Monica’s older brother.

They celebrate Turkey Day 10 times throughout the show’s 10 seasons. So, I set on my quest to answer the question: Are any of those episodes actually good, or are they just relying on the overall festive mood of the occasion? I present the results of my procrasti… research in a highly subjective ranking below. Spoilers ahead, but, come on, this show has been airing since before I was born — you’ve had plenty of time to watch it.
#10 “The One With Rachel’s Other Sister” (Season 9, Episode 8)
I must confess, I had to look up Christina Applegate to figure out why the audience was cheering so loud at her first entrance. In this episode, Applegate plays Amy, Rachel’s spoiled younger sister, who gets offended at — no joke — her not getting Rachel’s daughter if both Ross and Rachel die. Slightly morbid for both “Friends” and Thanksgiving, no?

Verdict: Neither Christina Applegate, nor Amy’s upper-class white chick grudges, have aged well.
#9 “The One With the List” (Season 2, Episode 8)
You can easily miss this Thanksgiving episode simply because the only Thanksgiving thing about it is Monica getting commissioned to create a series of Thanksgiving desserts from “mockolate,” a not yet FDA-approved chocolate substitute.

The main story centers around Chandler helping Ross choose between Julie (his current girlfriend) and Rachel (with whom he made out the day before) by typing up a list of things he loves and hates about them on Chandler’s new laptop. Don’t we just love it when one of the few non-white characters on the show gets written off to make way for a relationship between two white protagonists?

Verdict: Someone needs to tell Chandler that you make lists when choosing colleges, not girlfriends.
#8 “The One With the Late Thanksgiving” (Season 10, Episode 8)
By the time the last “Friends” Thanksgiving episode came around, the creators were quite obviously out of steam. Everyone is late to Monica and Chandler’s Thanksgiving due to forgettable subplots, and the episode’s highlight is Joey’s head getting stuck in the doorway. The writers do try to end the episode on an uplifting note, with Monica and Chandler finally getting the chance to adopt a child, but it falls flat at trying to recreate the warm aftertaste of episode #2 of this list.

Verdict: Monica deserves more recognition for cooking that dinner by herself for 10 years in a row.
#7 “The One Where Underdog Got Away” (Season 1, Episode 9)
This episode usually placed higher in other “Friends Thanksgiving episodes ranked” lists, but I never understood how something so bland could end up in the list’s upper five. You could blame it on it being the first “Friends” Thanksgiving episode ever, but why would you want to waste your time watching this when you can put on “The One With All the Thanksgivings” (see No. 1) instead?

In the episode, Underdog the balloon gets loose from the Macy’s Thanksgiving Day Parade and is spotted hovering above Washington Square Park. The six go watch it from their apartment’s rooftop, but — alas! — they forget the keys inside the apartment and Thanksgiving is ruined, at least until they see an ugly naked guy get it on with the ugly naked gal through a window and realize that friendship is magic.

Verdict: Background-watching material.
#6 “The One Where Chandler Doesn’t Like Dogs” (Season 7, Episode 8)
You know that the main conflict is a stretch when you’re more interested in the C-plot. Phoebe has to babysit a dog for her friends (at this point in the series, she lives in Monica and Chandler’s apartment), but Chandler hates dogs (how original of him).

Ross is faced with a challenge of naming all the states in under six minutes, at which he fails, and then struggles to remember the final one for the remainder of the day. Disclaimer: You might think it’s easy, but don’t say that until you actually try it without Google. Meanwhile, Rachel attempts to ask out her assistant, but did anyone ever even care about that relationship?

#5 “The One Where Ross Got High” (Season 6, Episode 9)
On this particular Thanksgiving, Chandler finds out that Monica still hasn’t told her parents that they’re living together or, in fact, in a relationship because the Gellers hate Chandler. Turns out they think Chandler smokes pot because of a lie a college-aged Ross told them to save himself in a classic “this is not mine, Mom, it’s my friend’s!” situation.

However, the B-plot of Rachel making a trifle with a layer of beef in it seems to be more high-stakes than Chandler trying to get Monica’s parents to like him, which is an overdone trope even for 1999. Also, for some reason Phoebe has a crush on Monica’s dad and then on Jacques Cousteau? This episode is definitely not “Friends” at its strongest game.

Verdict: I’m not sure what was more concerning: The fact that Rachel thought the meat trifle was an actual recipe or the fact that Joey actually liked it.
#4 “The One With the Football” (Season 3, Episode 9)
People tend to overlook this one because its premise is so simple: The crew plays a Thanksgiving game of touch football on one of those public NYC multipurpose courts. However, the episode’s beauty hides in its simplicity.

It’s a classic sibling face-off between Monica and Ross, with Phoebe and Joey on Monica’s team and Chandler and Rachel on Ross’ team initially before a mid-episode switch to boys versus girls. While this is not a “battle of the sexes” feminist masterpiece (and we should be way past seeing gender as binary anyway), it is certainly enjoyable to watch, since preexisting character traits play into the conflict and make it more ridiculous and, therefore, hillarious.

Verdict: Definitely more entertaining than actual football.
#3 “The One With the Rumor” (Season 8, Episode 9)
Brad Pitt, who was Jennifer Aniston’s husband at the time, joins the friends as  Will, Monica and Ross’ high school friend who has had a major glow-up for this Thanksgiving episode.

However, there’s one caveat: He absolutely hates Rachel. He hates her to the point where, in the past, he had co-founded an “I Hate Rachel” club with Ross and spread a rumor that she was a hermaphrodite throughout their high school. Don’t get me wrong, Will’s behavior is extremely problematic, as much as the fact that it’s being served to us as a joke. However, Pitt’s performance in this is amazing (just look at him crushing Monica’s Thanksgiving arrangement when Rachel walks in), and it is quite fascinating to observe him playing the pathetic dork.

Verdict: Humor might age, but Brad Pitt is timeless.
#2: “The One With Chandler in a Box” (Season 4, Episode 8)
This episode is all about the interpersonal bonds that make the “Friends” ensemble so enjoyable to watch. Joey is mad at Chandler for stealing his girlfriend, and Chandler decides to prove his platonic love for Joey by spending Thanksgiving inside a (rather large) box.

The B-story also proves to be rather deep. Ross is mad at Rachel for exchanging her Christmas gifts, and he calls her out as shallow. Rachel proves she’s anything but by showing him a box with the keepsakes associated with their past relationship. While this episode is not the funniest “Friends” episode of all time, it is certainly in the ranks of the most heartwarming.

Verdict: “I would sit in a box for you” needs to be a Valentine’s Day card.
#1: “The One With All the Thanksgivings” (Season 5, Episode 8)
I seem to be in agreement with the majority on this one. This episode comes from a time when the show was at its peak, and it shows through masterful characterization and well-timed comedy beats. We join the friends in a post-Thanksgiving dinner couch coma as they discuss their all-time worst Thanksgiving experiences.

Apart from the gratuitous “Chandler’s parents getting divorced” story, we get to hear about three of Monica’s worst Thanksgivings: the one when Joey got his head stuck inside a turkey, the one when Chandler called her fat and the one when she (with newly lost weight) attempted to take her sweet revenge on Chandler and accidentally cut off the tip of his toe. This is also the episode when Monica tells Chandler she loves him for the first time while her head is stuck inside a turkey. If you’re looking for a definitive “Friends” episode, this is the one.

Rewatching all the “Friends” Thanksgiving was equally delightful and painful. It reminded me why I loved the show so much when I binged it from beginning to end in freshman year of high school, but it also exposed many of the show’s flaws I previously overlooked, including its overbearing whiteness and sometimes downright offensive jokes (see No. 3 on the list) — a topic for another article altogether.

I wholeheartedly recommend No. 1 and No. 2 for watching if you’re looking for something to get you in the mood for giving thanks, and No. 3 if you are a Brad Pitt fan. You can watch all the episodes on HBO Now; if you don’t have it, now is the right time to remind your friends that sharing is caring.