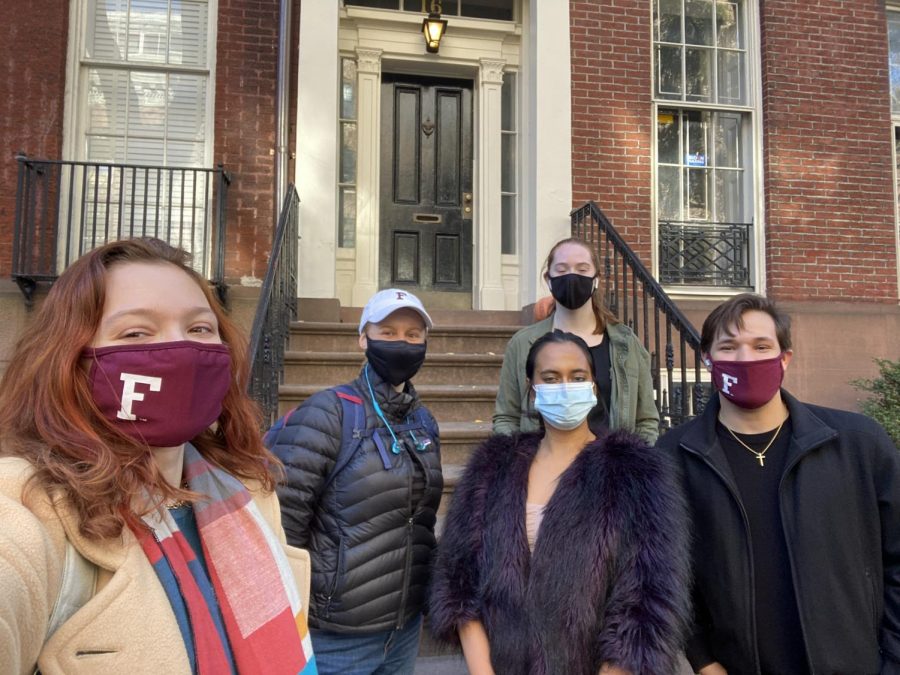 The sunny weather made the day perfect for a walking tour.

Quaint. Diverse. Historical. Artistic Grandeur. Imagine exploring West Village, and then exploring it with the Ramily. Students of Fordham Lincoln Center had the opportunity to explore and rewrite their memories of the West Village together this past Saturday, Nov. 14. The Office for Student Involvement organized a tour of West Village that culminated in camaraderie and a renewed love for New York City.

The tour kicked off with a brunch on campus at the Community Dining Hall. Decked from point to point with hospitable support staff, the dining hall was the ideal set up to acquaint students with the tour guides, who included Robert Sundstrom, Fordham College at Lincoln Center (FCLC) ’22; Jasmine Petrov, FCLC ’22; and Senior Director at the Office for Student Involvement Dorothy Wenzel. The frosty weather dissipated in the warmth of the group with the shared acknowledgment of one other’s companionship in the midst of social isolation.

One of the primary concerns for Wenzel was organizing in-person events for students in the absence of club leaders. Given that “social isolation is real,” she undertook the task of creating a variety of safe, in-person events in order to foster a sense of community despite the hostile external environment.
“Taking this tour allows students, who wouldn’t otherwise know about the history of the city, get a better understanding of their new home.”Jasmine Petrov, FCLC ’22
Garbed in each of their own interpretations of winter gear, the group proceeded to the subway using MetroCards provided by the tour guides. The journey included hopping onto the C train that transported everyone directly to West 4th Street.

Enveloped by the swarm of New Yorkers, everyone felt revitalized by the bustling energy of the West Village. Gone was the professional nature of the city that pervades midtown. Instead, they found themselves in the midst of the artists’ colony, famed for its quirkiness and bustling cafes, fashion, bookstores and restaurants. The guides had carefully planned the tour using the app Gesso, which provided historical commentary for the landmarks in the neighborhood.

“Taking this tour allows students, who wouldn’t otherwise know about the history of the city, get a better understanding of their new home,” Petrov said.

Touring the beautiful brownstones in the vicinity, the group was introduced to the rich narratives of the personalities that once inhabited the seemingly undistinguishable properties, as well as the illustrious events that once defined these landmarks. From famous historic saloons at 116 Waverly Place hosting the likes of Edgar Allan Poe to stories about personalities inhabiting the narrowest house in the city at 75 ½ Bedford Street, every single landmark had an unconventional background.

The group also had the opportunity to visit the famous LGBTQ+ bar, The Stonewall Inn, where the Stonewall Riots started the LGBTQ+ movement in New York. Known as a haven for the LGBTQ+ community, the Mafia-operated bar was raided in the ’60s by the police. This ushered in a new era of resistance against homophobia and transphobia as the patrons of the bar demanded their freedom and fought for their space despite the police closure. The rich heritage of the neighborhood has opened our eyes to impactful historical movements such as the LGBTQ rights movement.

The organizers wished to add a social component to this educational tour. “I think it’s always nice to meet new people. We get stuck in our apartments sometimes, just going back and forth between classes, and this is an opportunity to learn that we can be outdoors too,” Sundstrom said.

A mecca of intellectual genius and social awakening lies in this city. As Fordham students, one of our duties And privileges is to explore every nook and cranny of the city, in the hope that the collective genius of our predecessors might inspire us to leave our own rich legacy.