White Women: This One’s for You 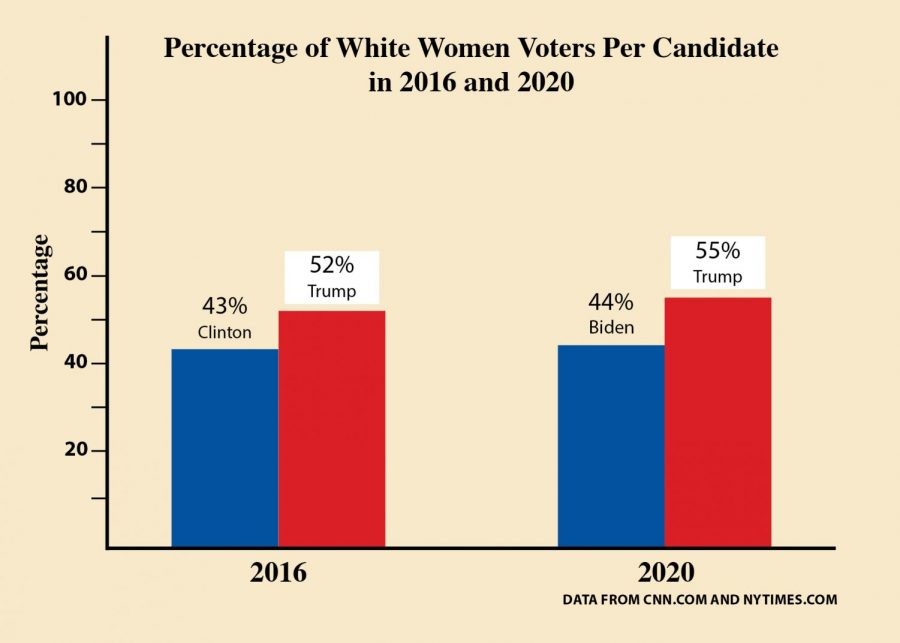 Not only did more white women vote for Trump in 2020, but they voted for him by a wider margin, too.

As the dust settles from the 2020 election, it’s time to reflect on what happened and how we move forward. There are already calls from Democrats and some Republicans for all Americans to unite, regardless of their chosen candidate. Trump voters should be the recipients of our empathy, the admonishment goes, and our only hope of healing as a country is to set aside our political differences and come together. But constantly asking the people harmed by white supremacists to show white supremacists empathy allows racism to continue. White women contribute to that perpetuation of racism, and we must put an end to it.

While unity may seem like a decent and even therapeutic request, it is important to recognize who is routinely offered empathy in our society and who is not. Does the call to “heal the divide” really improve the country? Or does it ignore the suffering of Black, Indigenous and people of color (BIPOC) for the sake of superficial peace?

Trump voters are explicitly asking for policies and rhetoric that harm BIPOC. To ask for reconciliation is to willfully ignore the racism that underlies support for Trump and his policies. Trump has tangibly worsened the lives of many Americans. Millions of voters chose to ignore his incompetence — which resulted in economic downfall and mass death — in order to protect the privileges afforded by whiteness.
White women as a category are guilty of perpetuating racism.
If there was any doubt surrounding the power that whiteness holds in America, it has surely been eradicated by the results of this election. The election might have seemed close, but when we look at the statistics, it was only close for white voters. The majority of white people voted for Trump, including 55% of white women — a larger percentage than in 2016.

White women as a category are guilty of perpetuating racism. Liberal white women, particularly in the North, might pin blame on the “backward” South, but people are not intrinsically racist because they live below the Mason-Dixon line, nor is racism solely confined to those states. All that is accomplished by writing Southern women off as unsalvageable is a feeling of moral superiority, when we could instead be recognizing it as an opportunity for progress.

By relegating the issue to a distant geographic location, you signal that you don’t have any racism worth examining. You signal to BIPOC that you are not committed enough to dismantling racism and doing the uncomfortable business of interrogating yourself and people like you. And if you won’t do it, who will?

The election results may have come as a surprise to more liberal white women, but surprise represents a crucial failure of white women to examine themselves as a cohort. White women may imagine they are incapable of bigotry because they see themselves as marginalized in the same way BIPOC are. They do face significant inequity, but they also receive the benefits from white supremacy, including access to better education, safety from law enforcement and more wealth.

Although the specific rationalization of each Trump voter may be different, white women vote against policies which would alleviate the struggles of women — against the services provided by a well-funded Planned Parenthood or against tax plans that would largely spare them raises — because they have determined that protecting white supremacy is more important.

As white women, one of our primary goals in dismantling this white supremacy must be to investigate ourselves as a demographic: our excuses, prejudices and fears. We have to first let go of the notion that America is a bastion of freedom and justice. Someday, we could be, but right now we are — at best — a deeply flawed democracy.
For all the celebration and relief among liberal white women, white women did not do enough to win this election.
Every time a white woman responds to the Biden/Harris victory with “I’m so glad America is good again,” the implication is that America pre-Trump did not have major flaws. Such an assessment plainly disregards the innumerable injustices that have existed in America throughout every single presidential administration, as well as the conditions which allowed Trump’s presidency in the first place.

So what are we going to do? It feels useful to tell people to vote, and it can be. But you have to know who your audience is. If you’re talking to other white women, particularly ones who are politically disengaged, it can be immensely productive to urge them to vote.

However, if you are directing that message to BIPOC, it is important to recognize that it is white people ourselves who have undervalued those lives and depended on them for votes almost in the same breath.

It is not useful to patronizingly pressure people into voting when all you plan to do is benefit from their participation and then immediately ignore their concerns after the election. This mindset parallels the white savior complex, in which white people offer input on how to deal with racism instead of dismantling the racism itself.

In fact, the people least served by our democracy were the ones who defended it the most. Biden won Georgia and the state is teetering on the brink of two Democratic senators; that is not because white women all put “VOTE” on their Instagram story, it’s because Black women worked tirelessly to overcome voter suppression. For all the celebration and relief among liberal white women, white women did not do enough to win this election.

White women must learn about the complex history behind American institutions, norms and political movements, then use that information to educate each other. Taking a careful, nuanced view of where we came from and how we got here will give us a roadmap for how to get out.

To show true solidarity with BIPOC, we must call fellow white women out. Holding each other accountable is the absolute least white women can do. We must identify and disarm in one another the preservation of whiteness, rather than accusing some amorphous “other” category of white women and hoping that will be enough to make it go away.