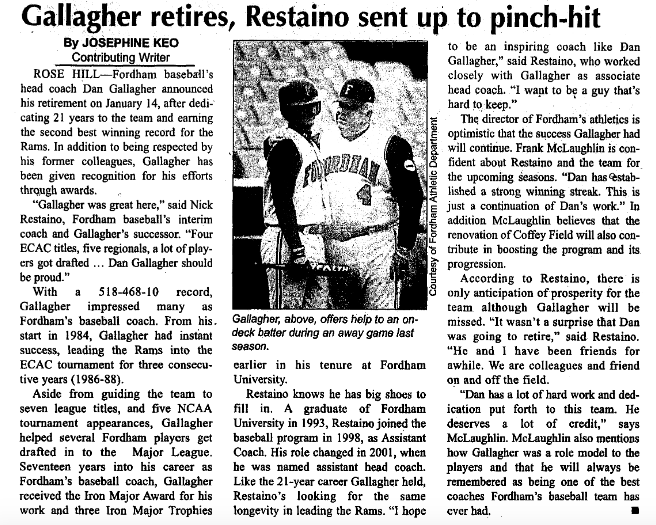 An article in The Observer's Feb. 3, 2005, issue reports on Coach Dan Gallagher's retirement. Gallagher passed away last month at the age of 84.

Last month, longtime Fordham baseball coach Dan “Skip” Gallagher passed away at the age of 84. Between 1984 and 2004, Gallagher led the Rams to seven conference championships and five NCAA tournaments, but his effect on the school community was more meaningful than any number of awards could ever convey.

In a Fordham Sports press release reporting the news, current baseball coach Kevin Leighton said, “There’s no doubt Skip was hard on his players and I know he didn’t say it often, but in our conversations, he often told me how much he loved his players, how much he missed them, and how much he appreciated them. Skip, Fordham Baseball will miss you, and we will push ourselves each day to live up to the legacy that you left.”

This ideology of tough coaching and deep caring proved to be highly successful for Gallagher, as he earned 518 victories in his time at Fordham. Only Jack Coffey, the Rams’ first full-time baseball coach from 1922 to 1958, has more.

However, despite spending 21 years at Fordham University, Gallagher’s career in baseball actually began as a player. After serving in the U.S. Navy during the Korean War, he found a spot in the Brooklyn Dodgers’ organization as an outfielder, and was in line to replace Duke Snider before a shoulder injury ended his career. He then began coaching high school baseball on Long Island, and after many successful seasons, he received the coaching job at Fordham.
“We had talent all over the roster, and we were all the same type of player, and I think that’s a credit to Skip.” Pete Harnisch, former player
While Gallagher fielded competitive teams in the Bronx for more than two decades, many of the players he developed in that time went on to even higher heights in the sport. Three of his players, Pete Harnisch, Miguel Jimenez and Ray Montgomery, reached Major League Baseball in the late ’80s and early ’90s. After three years with the Astros, Montgomery turned to the administrative side of the game, and now serves as the scouting director for the Milwaukee Brewers.

Meanwhile, after a legendary pitching career at Fordham earned him a place in the first round of the 1987 MLB Draft, Harnisch went on to have great success in professional baseball. He made an All-Star Game appearance in just his second full season in 1991, and went on to play for five teams before retiring in 2001. In the Fordham Sports series “On This Date” published in June 2020, Harnisch was quick to credit Gallagher for his individual and team success in college.

“We had talent all over the roster, and we were all the same type of player, and I think that’s a credit to Skip,” Harnisch said.

Much of the success Harnisch described came in 1987. That year, while Harnisch completed his three-year college career with a 21-3 overall record and 213 strikeouts, the Rams reached the NCAA Tournament for the very first time after winning the Eastern College Athletic Conference Championship. In the Northeast Regional, Gallagher’s Fordham team pulled off close victories over the University of Georgia and University of Michigan.

In 1999, Gallagher had to undergo open heart surgery after suffering prolonged chest pain. By that point, he had become one of the most popular figures on the Rose Hill campus, and in a time of need, the community rallied around him. There was an outcry of support for the coach’s recovery and return to the dugout, to such an extent that Gallagher received a full-page spread in a 1999 edition of The Fordham Ram.

“If we ever had all these prayer groups that are praying for me now, praying for peace, we would never have another problem with war,” Gallagher said.

In his 21 years, Gallagher always prioritized these moments of community above his conference championships, multiple trips to the national stage or even his three Iron Major awards, traditionally given to the best Fordham coach each year. When he was inducted into the American Baseball Coaches Association Hall of Fame in 2012, he made his priorities clear in his speech.

“My job was to get them prepared and turn everyone into a team. Everyone comes from different walks of life,” Gallagher said. “I used to change the rooming list every game, so all the ball players got to know each other. This helped create teams that really cared about each other. On top of that, we had a 97% graduation rate. These kids worked hard on and off the field. So many kids have come back to tell me that the discipline and work habits have shaped them as men.”

It’s certainly an accomplishment to develop three college players into Major League Baseball players. It’s quite another accomplishment to help mold hundreds and hundreds of teenage boys into men, and that’s what Gallagher considered most valuable in his tenure. It’s this contribution to the Fordham community and world at large that will never be forgotten.