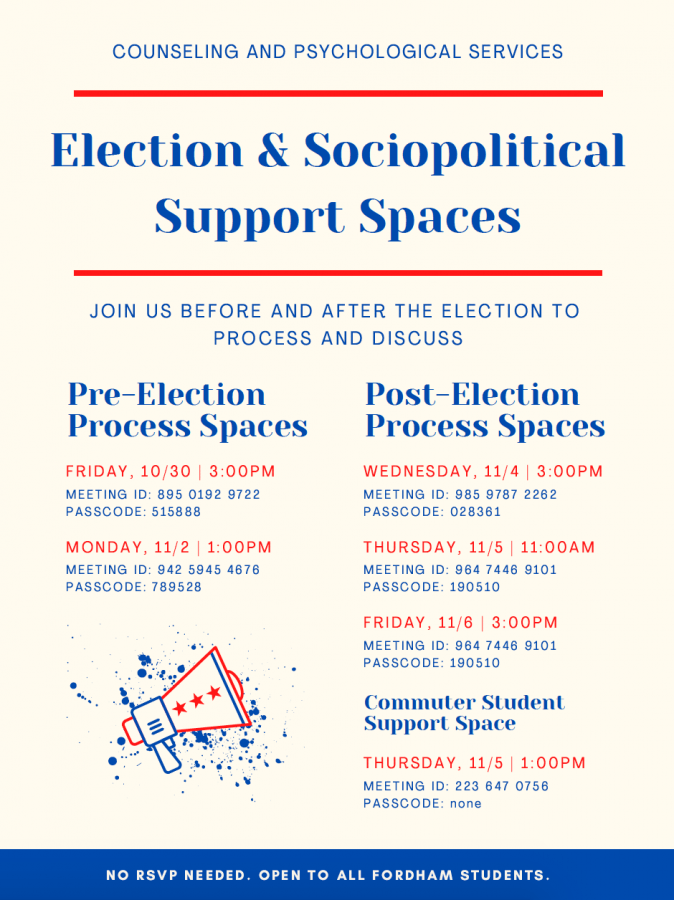 Over two-thirds of Americans said that this year’s election was a significant source of stress in their life, according to an American Psychological Association survey. In response to this wave of anxiety, Fordham University’s Counseling and Psychological Services (CPS) held online support groups for students to process and discuss election-related stress.

An Oct. 26 post on the CPS Instagram page announced several Zoom meetings before and after the election, offering “Election and Sociopolitical Support Spaces.” Most of the meetings occurred as votes were counted between Election Day on Nov. 3 and the announcement of Joe Biden’s projected victory on Nov. 7.

Jeffrey Ng, director of CPS, saw the meetings as an opportunity for students of all political backgrounds to come together.

“Our hope was that these pre and post election spaces would offer students the opportunity to support and be in solidarity with each other regardless of their political stance or perspectives,” he said.

Ng said that students’ responses to this year’s election were different from 2016.

“In 2016, most students seemed shocked by the election results and experienced it as an invalidation and threat to their identities,” he said. “It seemed like most students this year were anxiously optimistic/hopeful about the election and expressed relief about the results.”

Hannah Kang, Fordham College at Lincoln Center (FCLC) ’22, said that she attended one of the CPS meetings on Thursday, Nov. 5. By that point, former President-elect Joe Biden had established a lead over President Donald Trump.

“It was very cathartic hearing everyone’s concerns and fears regarding the outcome of the election,” Kang said. “You would think that Zoom would sort of dull the vulnerability and emotional experience, but this really wasn’t the case.”

In addition to offering services around Election Day, CPS has also helped students deal with additional stress related to COVID-19 and racial injustice. Kang said that these issues were addressed in her post-election meeting as well.

“There is a collective trauma from the first hit of COVID-19 that has hurt so many students and families,” she said. “There’s an even longer span of trauma from the police brutality and disregarded racial hate crimes faced over the past few decades. I related to a lot of the other students, and I learned so many new perspectives that haven’t even crossed my mind. I left feeling reassured that I wasn’t paranoid about these anxieties.”

Frankie Osso, FCLC ’22, is a Wellness and Outreach Intern at CPS. He said that the support meetings “seemed incredibly effective in allowing people to share their personal attachment to this election, to open up their fears that may come with it, and to be vulnerable among their peers. Vulnerability is strength in my eyes, especially in a time like this.”

Osso said that turnout was lighter than expected. “We were unsure of the turnout of our spaces because of the unpredictable nature of the election,” he said. “Nevertheless, we wanted to provide a place for students regardless of political affiliations, who might be experiencing significant stress due to the results of the election.”

However, the election of Biden hasn’t eliminated all of students’ concerns. When asked how she felt about Biden’s victory, Kang said she wasn’t quite relieved.

Biden’s “presidency may help us combat a few key issues including the COVID-19 pandemic, but the reality is we have such a divided nation that this was never and isn’t going to be a ‘peaceful’ transition,” she said. “Even when it feels like it’s over, it’s not over.”

Kang sees the need for political activism that goes beyond Election Day: “There’s so much more work to be done within grassroots organizations and local communities that can’t wait for this election, so regardless we can’t pat ourselves on the back and call it a day once January comes. There is still so much work to do.”

Learn more about dealing with stress during this time: