Is Gender Equality Taking a Step Back? 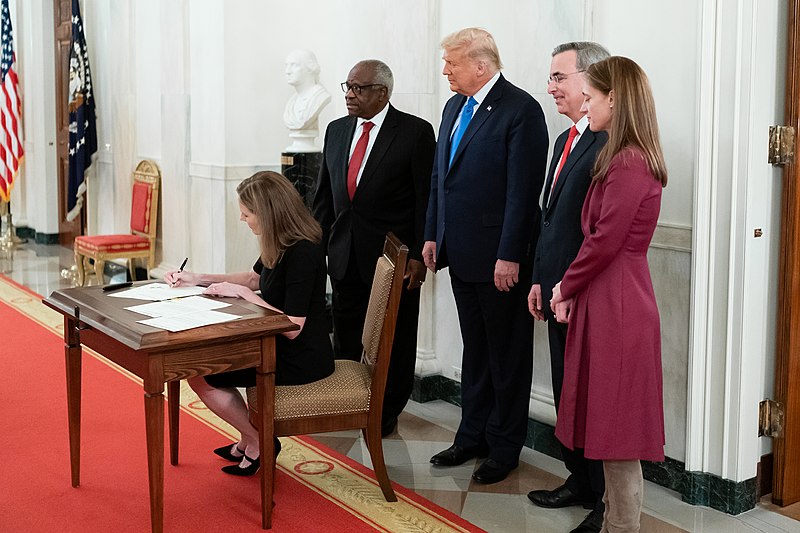 THE WHITE HOUSE VIA WIKIMEDIA COMMONS

Amy Coney Barrett was confirmed as a Supreme Court Justice on October 26, about a week before Election Day

It was one tense holiday season when my Hispanic and very traditional family found out I wasn’t going to be a doctor. Can you imagine how awkward it was when I told them that I wanted to be a part of the barely 38% of female lawyers in the country?

I’ve had my fair share of arguments with the men in my family, and even my mother, about the traditional guidelines set on women that control them and tell them what to do with their lives, criticize their bodies and looks, and objectify them. Those discussions never ended prettily and created an anger in me like no other.

Unfortunately, the steps that we have taken to better the situation for women in this country seems to have regressed in the past couple of weeks. The tragic death of Justice Ruth Bader Ginsburg left a slot in the Supreme Court up for grabs. Ginsburg was a respected and loved judge with her positive morality toward women and body autonomy. Her dying wish was to wait four weeks after her death for someone to be appointed into her position. Unfortunately, her wish was overlooked.

It was disappointing to hear that not only is Barrett underqualified for the Supreme Court judge job in comparison to other judges, but she is also a woman who threatens women’s autonomy over their bodies — exactly what Ginsburg advocated for as a judge. I still can’t grasp how a woman who’s barely had three years of experience as a judge and has never argued an appeal or never tried a case before could fulfill this esteemed and difficult position.

Even more concerning is the fact that Barrett was a member of an anti-abortion group called the South Bend’s Women’s Care Center (WCC) that promoted a clinic misleading women about health care options. The WCC claimed to provide abortions, when it reality it tried to intervene with the women’s decisions.

Samantha Bohrer, Fordham College at Lincoln Center (FCLC) ’23, voiced her initial reaction to Barrett’s nomination: “I was immediately afraid for my reproductive rights and I was angry that another woman would work so hard to get a position in which very few women had held, and would use that position to literally turn back the clock and take away rights other women and female identifying individuals have fought to give her.”

Similarly, Julia Rinaldi, FCLC ’23, expressed a similar sentiment and added: “As women, I feel like we are taught that seeing any woman in power is an inherently progressive or glass-ceiling-shattering thing, but that’s not true.”

Just because a woman has been given the opportunity to be in a position of leadership does not mean that she will do women justice in that position. The reactions toward Barrett becoming a Supreme Court judge were a mix of disappointment, fear and concern in regard to the future of body autonomy. No woman I know wants to be told what to do with her body. Why should we let a bunch of government officials decide what’s best for our bodies?

I think it’s important, though, to recognize that, as a young person, I am able to voice my opinion to the public, bring it up to professors in talks and share it with my peers. It’s imperative to note the power of young people in society and the change we can create in the world, no matter how big or small.

“I definitely think it’s important to admire how far we’ve come in only 100, even 50, years in regards to women’s rights,” Rinaldi said. “However, it’s 2020 and women still make an average of 78 cents for every dollar made by men, and the number is even less for women of color.”

How are we supposed to feel empowered and equal to men when we do the same job as them, yet still make less than them?
But how can we be safe when an anti-abortion Supreme Court judge can potentially determine what we do with our bodies through the law?
Hillary Ordoñez, FCLC ’23, emphasized that more needs to be done for Black women. “We can’t have gender equity if there isn’t racial equity, and that’s where we can start. Focusing on issues like prison reform, institutionalized racism, lack of health resources, high maternal mortality rate, gentrification and employment discrimination are all (but not limited to) facets where black/women of color are always disadvantaged,” she said.

Similarly, Sophie McAndrew, FCLC ’23, said, “There’s a lot of work to be done especially for women of color, disabilities, limited access to healthcare, etc. I think there needs to be more programs put in place at the workplace/institutions for diversity, equal pay and more women in higher positions.”

Within the population of women, women of color suffer even greater challenges in society. There needs to be more women of color in positions of leadership so that they feel empowered and safe. But how can we be safe when an anti-abortion Supreme Court judge can potentially determine what we do with our bodies through the law?

We need to be reminded that we are strong, powerful and heard women. We have a voice and we will be heard. Ginsburg once said, “I said on the equality side of it, that it is essential to a woman’s equality with man that she be the decision-maker, that her choice be controlling.”