Beau, Bella, Bellisimo: The Beauty and Benefits of Bilingualism

Why learning foreign languages is good for your brain 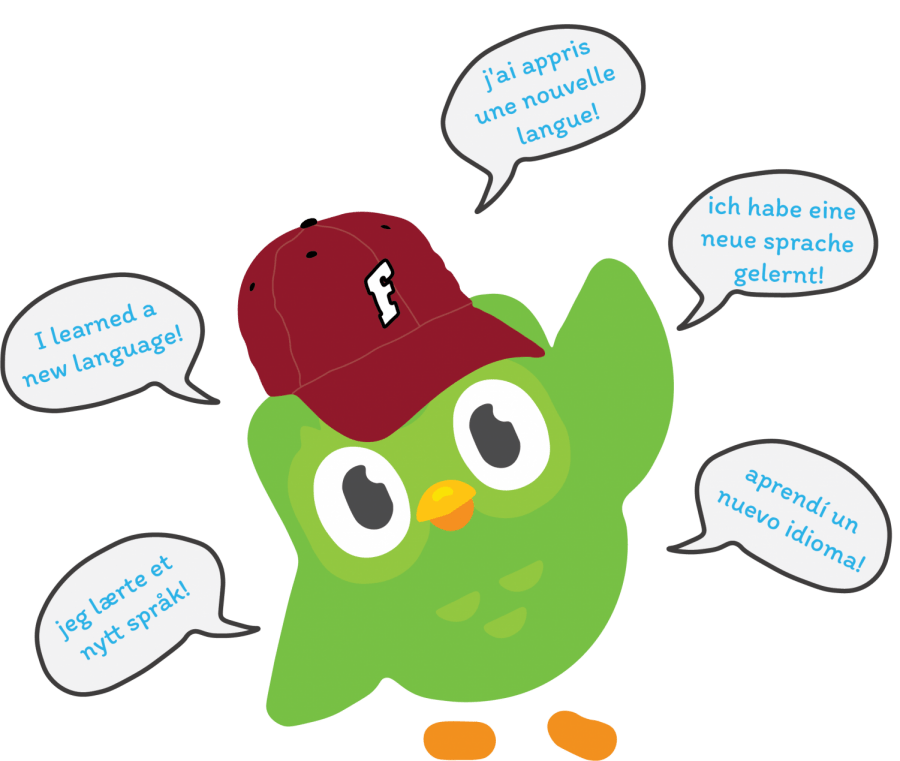 Apps like Duolingo are an easy, free way to add language learning into your quarantine routine.

Although the pandemic has prohibited us from traveling internationally for the foreseeable future, we can still learn about foreign cultures by learning new languages.

Bilingualism is a highly appraised skill throughout various fields of work and study. It is much easier to learn a second language as a child because the brain is more flexible in terms of cognitive development. However, it is not impossible to learn a new language later in life. It is even quite beneficial for the young adult brain in terms of improving concentration, response time to stimuli and overall cognitive function efficiency.
The Benefits of Bilingualism
Substantial data from a 2017 article written by Canadian psychologist Ellen Bialystok concludes that bilingual adults have better overall executive performance, and higher attention spans and concentration levels than their monolingual peers. One study found that “Bilinguals could more efficiently shift attention between dimensions to select the correct response” when presented with multiple tasks to complete. The particular function studied is known as “task switching,” which is the unconscious ability to “shift attention between one task and another.” When strengthened, this function enables faster and more efficient adaptation to various situations.

Another study from 2008 found that response times were faster among bilingual individuals because the brain is more adapted to changing back and forth between languages. This is also due in part to the brain’s ability to task-switch. The ability to formulate quick responses is an important skill, especially since employers often value workers who are able to communicate with a variety of people.

Knowing a second language can also protect against neurodegenerative diseases like Alzheimer’s and dementia. The skills required to learn multiple languages enable the brain to function better than a monolinguistic brain both before and after developing a neurodegenerative disease. Although there is no cure for such diseases, having strong cognitive function is a good way to promote one’s health for as long as possible.
Learning a New Language in a Pandemic
While social distancing guidelines and quarantine protocols mean that learning from locals is impossible, there are still lots of resources one can use.

A New York Times article offers several options for language learning, including apps like Duolingo and Babbel, podcasts like Coffee Break, YouTube videos, and TED Talks. The article also suggests that people try the digital newsstand PressReader or the free e-book library Project Gutenberg to practice reading. Watching foreign films and television and listening to foreign radio are also recommended. Using dating apps like Tinder and Bumble to match with people around the world can be a fun way to improve both flirting and language techniques. Meanwhile, Rosetta Stone and Pimsleur are also known as effective language learning programs.

Some of these options require payments for complete program access, such as Pimsleur, Rosetta Stone, Babbel and PressReader. Viewing foreign films often requires a subscription to a streaming site like Netflix, Amazon Prime, Hulu or HBOMax. Duolingo, YouTube, TEDTalks and Project Gutenberg, on the other hand, are all free to the public. Coffee Break is also free, but for those who enjoy the podcast and want to take more advanced courses, there is also Coffee Break Academy available for a fee.

Most Fordham students are required to study a foreign language up to a 2001 or “exit level” course, depending on major requirements and placements made by the department of modern languages or classics department. While it may seem tedious and time-consuming, the skills and knowledge gained from learning foreign languages can prove beneficial in the long run. Not only is brain function strengthened, but the ability to find new opportunities also increases.

Knowing more than one language enables us to connect with more people outside of our immediate circles. Within the five boroughs of New York City, we are surrounded by hundreds of different languages, and through distance learning, we are connected to our peers from around the world.

You don’t have to meet people in person in order to connect with them. In a world where social distancing is becoming a norm, communication is more important than ever, and we can further bridge the connection gap by learning new languages.