Rethinking the ways we connect and show gratitude during COVID-19 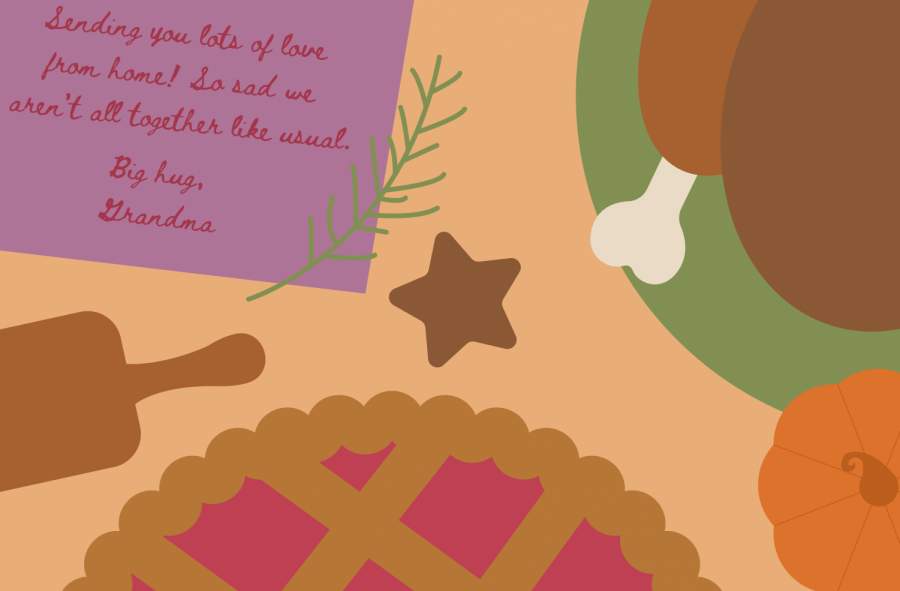 2020 has been a year defined by defying tradition. From virtual graduation ceremonies to mask mandates in public to the first president in U.S. history who refuses to concede, the experiences of Americans this year have been anything but traditional. Now, with one of the most traditional holidays rapidly approaching, many are struggling to decide which traditions to keep and which ones to break.

Thanksgiving, which falls on Nov. 26 this year, has been an official American holiday since 1863, but it has been celebrated since 1621. The story starts with a three-day feast, during which members of the Plymouth colony and Wampanoag tribe celebrated the colonists’ first successful harvest — a harvest they were able to procure because of skills they learned from Indigenous peoples.

There is a lot of controversy about whether Thanksgiving should still be nationally commemorated. Some believe that the story is used as an example of good relations between the two groups that downplays the violent actions of later colonists against Indigenous peoples.

Every year, Thanksgiving ranks as one of the heaviest travel days of the year as families dispersed around the U.S. reunite. Even for those who do not travel to see family, dinners are often held with close friends, colloquially coined “Friendsgiving.”
As COVID-19 cases are once again at astounding heights, many families are rethinking their Thanksgiving traditions.
Each family incorporates their own traditions for the holiday, but most of the time a turkey and pumpkin pie are involved. One of the most popular Thanksgiving traditions is the Macy’s Thanksgiving Day Parade held in New York City every year; it will be held virtually this year.

As COVID-19 cases are once again at astounding heights, many families are rethinking their Thanksgiving traditions. Usually a stressful event in terms of the large-scale planning and massive amount of food prepared, this Thanksgiving is made even more challenging as families try to figure out “how to observe traditions while also observing health regulations,” as one New York Times article put it.

The Centers for Disease Control and Prevention (CDC) defined the least risky activities for the holiday as a small dinner with members of the household and online shopping, while the riskiest activities included shopping on or around Thanksgiving Day and participating in crowded events like parades or large indoor gatherings. Among the moderately risky activities was having a small dinner outdoors with friends or family who live nearby.

However, there are other factors and ideas that families should keep in mind when planning Thanksgiving.
Change With the Season
Because Thanksgiving always falls on the last Thursday of November, the day changes every year, so the date itself is less important than the food and festivities that accompany it.

Ava Peabody, Fordham College at Lincoln Center (FCLC) ’23, explained that for her and her immediate family, Thanksgiving is “more about having the time to take a trip than having our particular traditions on the actual day. We can do them any day.” Peabody usually celebrates Thanksgiving with a trip to New York City with her parents, but they also have a more typical Thanksgiving celebration — which includes watching the Macy’s Thanksgiving Day Parade on TV (the live version as well as the rerun) and the Charlie Brown Thanksgiving special and making deviled eggs — on or a few days after the holiday.

Outdoors Are the New In(doors)
The CDC notes that, if there is a planned gathering including people not in the immediate household, outdoors are much preferred to indoors.

Thanksgiving dinners can be held in backyards, on rooftops or even in neighborhood streets. Opting for an outdoor dinner is a great way to have contact with people outside of the immediate family, especially at a time when many are lonely, isolated and anxious; it’s a great option for elderly individuals, in particular.

Sam Elbedeiwy, FCLC ’22, usually reunites with family at his grandmother’s farm in Texas. This year, however, he and his family are going on a socially distanced camping trip to “avoid putting my other family members at risk.” He continued, “It’s definitely different, but I’m just excited to see my family together for the first time in a very long time.”

The most important thing to remember about an outdoor gathering is to maintain space between parties. Some suggestions include having different tables for each household that are properly spaced from one another or hosting a potluck-style dinner where the food is placed on a table and guests can serve themselves instead of passing dishes around.
Host Rules
If travel is unavoidable, then it is important to respect the rules of the host. College students, in particular, will be going home for the holidays as universities close campuses early. College students are also one of the populations with the highest cases of COVID-19, meaning that they pose an extremely high risk of spreading the virus to their home communities.

Limiting in-person guest lists can help mitigate the spread of COVID-19 and allow you to stop dodging the uncle you really don’t like speaking to at dinner. But, if your extended family and friends want to be included, then video conferencing platforms like Zoom can help connect you.
Get Creative With the Cooking
Thanksgiving is infamous for the hours spent in the kitchen preparing the dishes, and smaller-scale celebrations mean fewer hands to help out. It might not make sense to get as big of a turkey with a smaller number of dinner guests and portioning the side dishes so that they don’t have to be passed around are two ways that traditional Thanksgiving food can be revised.

New York City chef and food writer Alejandra Ramos addressed the changes to Thanksgiving meals this year: “It’s important to acknowledge that this year is probably not going to look like previous ones and that is absolutely OK … Nobody should feel pressured to match that same level this year. We don’t all have the same resources, cooking skills, time or even mental energy as we may have had in previous years.”

For students like Max Breit, FCLC ’22, this may be the perfect opportunity to kick turkey off the menu and replace it with something else. He explained that “This may be an unpopular opinion, but I do not like Turkey and will forever dread having to eat it every Thanksgiving.”

Another option is to throw out the old cookbook and define a new tradition. Exchanging the usual roasted turkey for pernil, turkey biryani or stuffed portobellos can be both a fun challenge for the family and can introduce exciting new flavors.
“But, I am confident that our tradition of giving thanks will continue because that is unaffected by a virus.” Kathryn Echele, FCLC ’23
We also need to take into account the fact that we’re still in the middle of a pandemic, and the health of the population is still at risk. As one Washington Post writer said, “All of this might seem extreme. People will wonder how we can give up so much, when we’ve already gone through almost eight months of isolation and stress. But that’s exactly the point. Don’t let that sacrifice be wasted.”

This Thanksgiving, a powerful way we can show the long-held tradition of expressing gratitude is by keeping our loved ones safe to the best of our abilities.

Kathryn Echele, FCLC ’23, reflected on the upcoming holiday: “Things will definitely be different. There will be no gathering, and I won’t see my cousins until maybe Christmas at the earliest due to the dangers of a pandemic. But, I am confident that our tradition of giving thanks will continue because that is unaffected by a virus.”

Elbedeiwy agreed, saying, “We might have to sacrifice a few of our traditions this year, but I don’t care. I’m just happy that I get to see my family.”