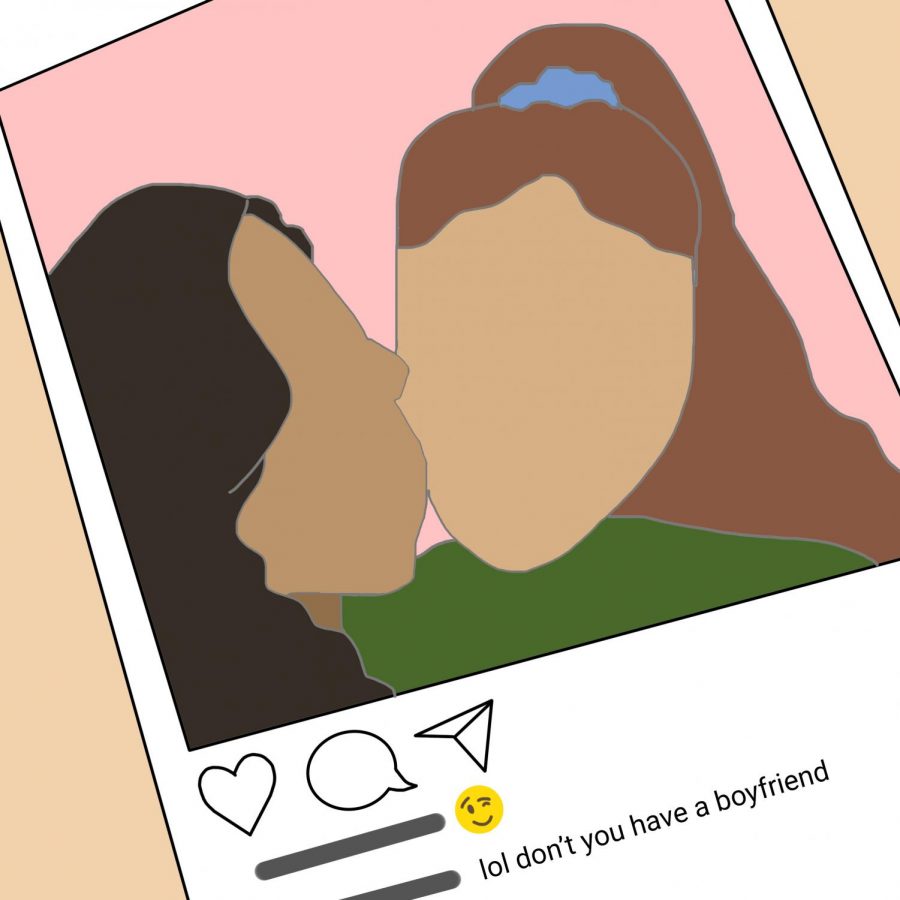 I was drunk the first time I kissed a girl. She was even more drunk. She was sloppily making out with some friends a few feet away from me. My best friend, knowing I’d been grappling with my sexuality for some time, pushed me in their general direction. Next thing I knew, I was making out with her in that purple-LED-light-tinted haze.

We were teenage girls, coming of age under the male gaze.

I felt icky about it for a long time after, not because I feel icky about kissing girls but because she’s straight. And so were her other friends. And they made out with each other in front of some guys they were trying to impress. I was still far from coming to terms with my queerness, but I immediately felt guilty for contributing to the fetishization of queer women.

It’s a few years later. It’s Wednesday morning; I’m in college; I’m out as bi but I could be gay, I don’t know; I’m scrolling through Instagram when I come upon a picture of my straight friend making out with another girl. From the way their bodies are positioned, I would have believed that they are a couple if I didn’t know she was straight and had a boyfriend.

Sadly, the fetishization of lesbians is old news. It isn’t even news: It’s an overused oppressive trope that hurts queer women.

And it doesn’t stop at queer women either.

There is also something called M/M fiction in which straight women fetishize gay men.

Another time, a straight girl posted an image in which she was holding hands with her best friend and referred to her as her “girlfriend” in the caption. Once again, I almost fell for the cuteness until I realized she has a boyfriend.
You cherry-pick which parts of queer culture you wish to participate in without experiencing the fear, the shame, the suppression, the self-hatred, the continual questioning, the lack of representation, the lack of rights.
You may think it’s all fun and games — you may even think it’s “hot,” and perhaps it is — but you get to go to bed at night without wondering what it’ll be like coming out to your homophobic parents. You don’t have to tense up everytime they ask about any boys in your life, wishing you could tell them about a girl you like instead. You don’t have to experience straight men harassing you for videos after you and your girlfriend kiss in public.

You cherry-pick which parts of queer culture you wish to participate in without experiencing the fear, the shame, the suppression, the self-hatred, the continual questioning, the lack of representation, the lack of rights. You get to kiss your friends without getting attacked and hospitalized.

For five years of my life, I identified as bisexual in a very subtle and dismissive way. I can’t tell you how many times I invalidated my sexuality by telling myself, “Oh, I’m just doing that for attention. I’m probably just saying that so guys will find me more attractive,” when, in reality, I swallowed my butterflies and refused to let them flutter on display.

It was never for show.

It’s a few years later. It doesn’t really matter right now if I’m bi or gay or whatever label the world can come up with. I know my attraction to women, sexually and romantically, is real and cannot be dismissed. But simply for the sake of living my life, I have to consciously make effort to unlearn the effects of hypersexualization of lesbianism and queer peoples in general.

Don’t dismiss my sexuality by kissing girls for attention if you are straight. And certainly don’t post it on Instagram. It’s not funny to call yourself an ally and then become part of the issue.