Refusing to Accept the ‘New Normal’: On Climate Change and Capitalism 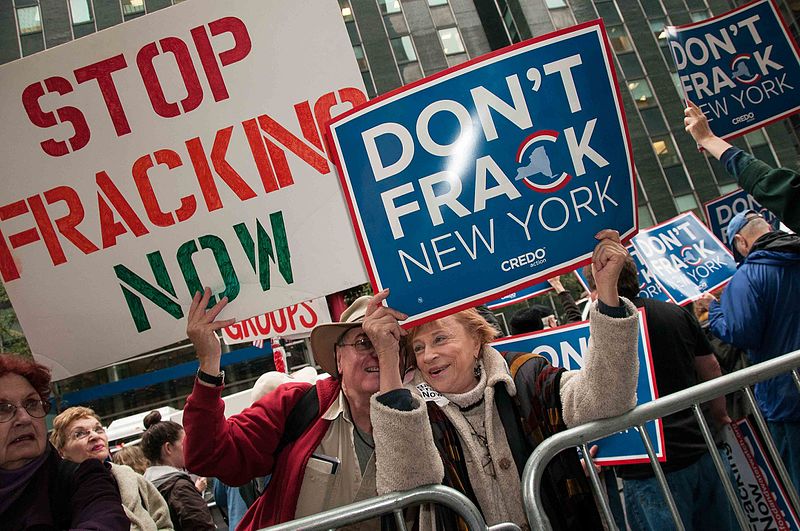 Protesters advocate for a ban on fracking in 2015. Neither presidential candidate this year has condemned the oil industry or the building of new fossil fuel infrastructures.

Our world is on fire. Not just California, but the entire planet. Wildfires are burning from the jungles of Central and South America to the mountains in Lebanon and other areas of the Middle East. And while the fires are raging for a number of different reasons (be it inefficient forest management or deliberate deforestation efforts), they are representative of a much more malignant issue that needs to be prioritized in politics.

It’s high time that the general public view climate change as a direct result of colonialism and the philosophies that endowed the men in power with the belief that the world was theirs for the taking. These views have directly led to the Earth’s rapid deterioration.

According to National Geographic, in the last 10 years, we’ve experienced the hottest years on record, with the most wildfires, the greatest loss of Arctic ice and the most severe tropical storms. And this is just the beginning. Climate change seriously threatens our existence on this planet, with a timeframe much more narrow than most of us are comfortable thinking about.

The problem is growing exponentially and we don’t have another four years to waste arguing over whether it exists or not. The outcome of this election could seriously affect the condition of the world’s climate for years to come.
How do we fix a problem that the people in power would rather ignore?
The elites of this country don’t want to acknowledge the state of the world or the role they’ve played to get us here. As we’ve seen with both presidential candidates, neither Donald Trump nor Joe Biden has condemned the oil industry. It’s clear that money makes the world go round, specifically oil money.

Their monetary influence over politics has subverted public industries to serve their interests rather than those of the common good. Although there have been attempts to create progressive legislation around renewable energy, they’ve been faced with extreme voter backlash, which heavily discourages representatives from drafting or supporting legislation promoting renovations in the energy sector.

This is the problem that Biden ran into when he tried to promote his climate change plan, which ultimately focuses on reducing emissions and building green infrastructure. His plan falls short, as he doesn’t have a strict ban on new fossil fuel infrastructure, and he doesn’t plan on having net-zero emissions until 2050. Although his plan’s timeline is less than ideal, the alternative is quite frankly, unthinkable.

While Trump and his Republican base can no longer ignore the wildfires in California, they have yet to admit that emissions from burning fossil fuels are driving the planet’s warming. As a result, they’ve shifted their tactic to centering on the issue of forest management, allowing them to take responsibility for California’s wildfires without encouraging divestments from the oil and gas industry.
We must fully commit to divesting from fossil fuels, meaning at the very minimum that we stop building new fossil fuel infrastructure. Additionally, we have to start reinvesting in communities that have been disproportionately affected by climate change and colonialism (which go hand-in-hand).
As he’s said in both debates, Trump plans on building more natural gas plants and expanding the fracking industry, and there are a lot of powerful people who share his support for these dangerous industries.

The real question is, then, how do we fix a problem that the people in power would rather ignore?

The first step is talking about it with language that doesn’t disguise the fact of the matter: A very small percentage of people in this world are living a life of extreme luxury at the direct cost of the majority of the planet’s inhabitants. I’m not talking about the millions of upper-middle-class people around the world who have been able to make a decent living for themselves; I’m talking about the hundred-millionaires and the multi-billionaires of the world.

There simply is no need (or excuse) for such vast hordes of wealth, especially when the system that produces them also directly leads to the destruction of our planet. We need to start investing in a system that doesn’t depend on the marginalization of people to succeed, a system that protects the Earth and sustains her for generations to come. While I don’t know what exactly this will look like in the long term, I do know where to start.

We must fully commit to divesting from fossil fuels, meaning at the very minimum that we stop building new fossil fuel infrastructure. Additionally, we have to start reinvesting in communities that have been disproportionately affected by climate change and colonialism (which go hand-in-hand).

By purposely keeping these communities weak, we’ve only limited our domestic capacity to mobilize. We must also start implementing green infrastructure along our coasts and in large urban areas to help mitigate the effects of extreme weather. And finally, we must hold our elected officials responsible for their lack of action on the matter.

While it’s hard to accurately do so within the confines of a two-party system, we must step up our individual and collective action to voice our concerns to representatives and protest the current system in place.

The task at hand is large, but we have the capability to meet it head on — we just can’t afford to keep putting it off any longer.