A Pro-Choice Catholic on Single-Issue Voting 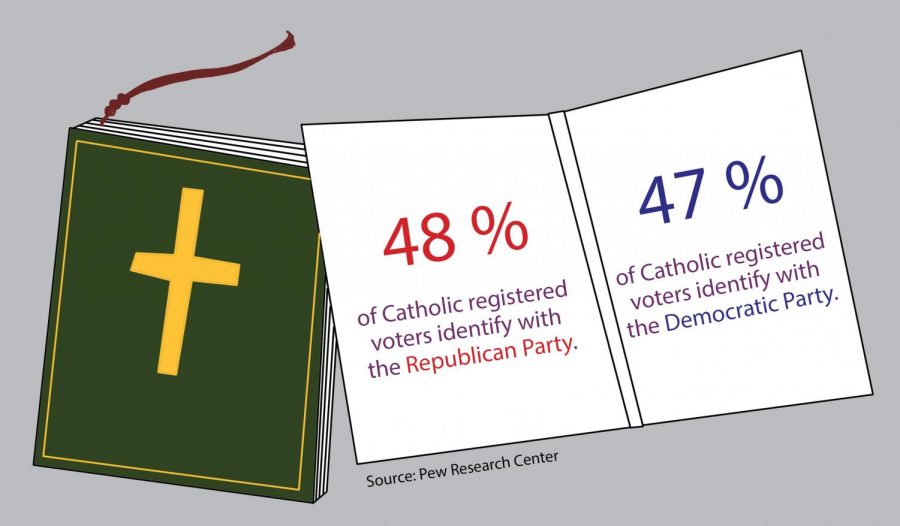 As a cradle Catholic, the Catholic faith has been my companion since birth. It led me through the traditional sequence of sacraments: Baptism, First Holy Communion and Confirmation.

When I decided to attend a Jesuit university, I expected my faith to follow me there, and it did. But as with many relationships, the way I view Catholicism evolved from when we first met.

Now, with one of the most important elections around the corner, I have become painfully aware of how the Church’s stance on abortion could influence single-issue voters. This narrow-minded way of voting goes directly against my personal understanding and experience of the Catholic Church.

Instead of unpacking the complicated procedure itself and debating when life begins, I want to focus on Trump’s stance on abortion. According to Trump’s Twitter, he claims: “PRO LIFE! VOTE!”

He provides no context or reason for this tweet. Instead, he polarizes pro-life voters and pro-choice voters even more, amplifiying the singularity of abortion in his policial campaign.
This isn’t about being pro-life or pro-choice. This is about Catholics realizing that if we vote based on a single issue, we could elect a president who will do the exact opposite of what our faith stands for.
But this is Trump’s strategy: to find a reason for single-issue voters to cast their ballots without examining him as a whole person. He targets religious voters, trying to capitalize on religious doctrines to gain supporters.

What about me, a Catholic who believes in giving women the freedom to make a decision based on their own beliefs?

It might sound counterintuitive, but the Church itself shaped me into the pro-choice Catholic that I am today. I’m no saint, but I’ve learned to treat others with kindness, to listen to those less privileged than me and to respect those who think differently than me.

We are critical thinkers, fighters and equally split in terms of political opinion. In fact, politically active Catholics hold diverse views, with 47% identifying as Democrats and 48% identifying as Republicans according to Pew Research Center. This diversity is something to be celebrated, as I have had many civil yet informative conversations with Catholics who think differently than me, a true test of maturity and humility.

Catholics are much more complex than Trump implies, so why should a single issue determine such a vital vote? Shouldn’t we, as Catholics, see that our current world is not one we want for our future children?

We cannot vote pro-life until this world is better equipped to handle new lives. If Donald Trump gets reelected, it definitely won’t be.

A defunded Planned Parenthood would leave 2.4 million Americans without health care. The LGBTQ+ community would continue to be discriminated against, losing basic human rights because of whom they choose to love. People of color would still suffer from the white supremacist in office who calls a civil rights movement “toxic propaganda.”

This isn’t about being pro-life or pro-choice. This is about Catholics realizing that if we vote based on a single issue, we could elect a president who will do the exact opposite of what our faith stands for.

Catholicism is my lifelong companion, and it affects not only what I believe in, but also what I fight for. I want my vote to fight for children, both born and unborn. But I will fight to protect their mothers’ rights, too. Financially insecure mothers. Sexually assaulted mothers. Black mothers. Lesbian mothers.

Next time you see Trump tweet about being “pro-life,” ask yourself: Does he really care about kids, or does he just want to control their moms? Trump claims to have a Catholic fanbase, but as for me, I know a single issue will not determine who I want elected for our future generation.