Intertwined Influence: From Page to Pitch 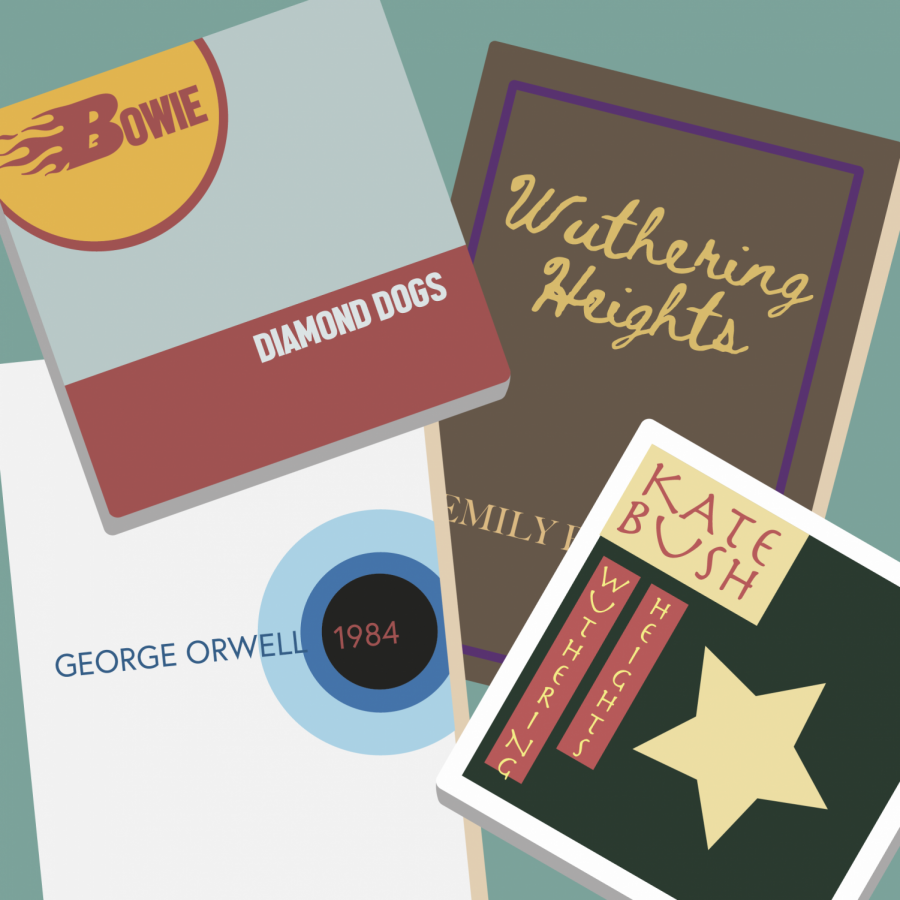 “Once upon a time” has become synonymous with storytelling or literature. Though the phrase was born between the pages of a book, it slowly danced onto sheet music, with musicians incorporating the phrase into lyrics or titles.

Countless songs and albums were inspired by books. Two artists in particular impeccably incorporate literary inspiration with musical genius: Kate Bush and David Bowie. Both artists are well known for their musical narrative and unique sound. Literature inspires musical invention, especially by way of lyrical creativity and the music itself.

A musical pioneer, Kate Bush has inspired many from Julia Holter to FKA Twigs to Lady Gaga. From her eccentric music videos to unusual lyrics, Bush’s art pop persona makes her one of the most interesting performers to emerge from the 1970s. Deriving inspiration from numerous sources, Bush frequently delves into literature for ideas.

Bush based her first great hit, “Wuthering Heights,” on the Gothic Emily Brontë novel of the same name. In the song “Wuthering Heights,” Bush embodies the character of Cathy. She sings, “Heathcliff, it’s me, I’m Cathy” and explains Cathy’s position with a tragic request, “I’ve come home, I’m so cold / Let me in through your window.”

In the novel, Cathy’s tortured soul endlessly wanders the moors even in death, hopelessly searching for a way to make amends. Bush’s ability to convey this narrative through a few chorus lines exemplifies the blend of literature and music; it is the same story with a different presentation.

It is also important to acknowledge how Bush sings this song. She does not sing softly but presents high-pitched, screeching vocals. These screeching vocals evoke the same feeling that Brontë’s Gothic writing style does. Both convey the dark desperation of the subject matter.

Joyce was a pioneer behind the stream-of-consciousness writing style; he displays this style through Molly’s unpunctuated, passionate soliloquy. Bush recreates this blissful delirium in “Sensual World” when she frequently exclaims “yes,” echoing Bloom’s soliloquy. Her smooth vocal transitions create a sense of verbal blending, emulating Joyce’s style of unpunctuated stream of consciousness.

Another artist known for his lyrical creativity is David Bowie. A true master of reinvention, Bowie tackles a plethora of themes in his work. One such theme revolves around George Orwell’s “1984.”

Though Bowie’s musical adaptation “1984” never came to fruition, the surviving songs landed on his 1974 album “Diamond Dogs.” “We Are the Dead,” “Big Brother” and “1984” all derive from Orwell’s famous novel. Though the whole album echoes Orwellian themes, “1984” provides the clearest direct parallel.

Bowie tackles the same themes of Orwell’s “1984” in his eponymous song. He sings, “They’ll split your pretty cranium, and fill it full of air.” He references the brainwashing that Orwell cautioned against. Similar to Bush’s reimagining of her literary inspirations, Bowie conveys Orwell’s message in a new but effective way.

In addition, Bowie utilizes the instantaneous cultural connection to “1984.” The song closes with Bowie repeating “1984.” He is aware that his audience comprehends the gravity of these numbers without context; they carry cultural weight. In this numerical repetition, he lets that meaning settle subtly, rather than overwhelming the listener with overzealous comparisons.

Literature permeates music in terms of lyrics, songs and even albums. Kate Bush and David Bowie both effectively connect literature and music. Their lyrical inventiveness and musical sound both present literary inspiration in a new form.

Literature constantly inspires musical innovation. This synthesis of two distinct yet intertwined disciplines has created, and will continue to create, some of the most interesting and unique songs in musical history.