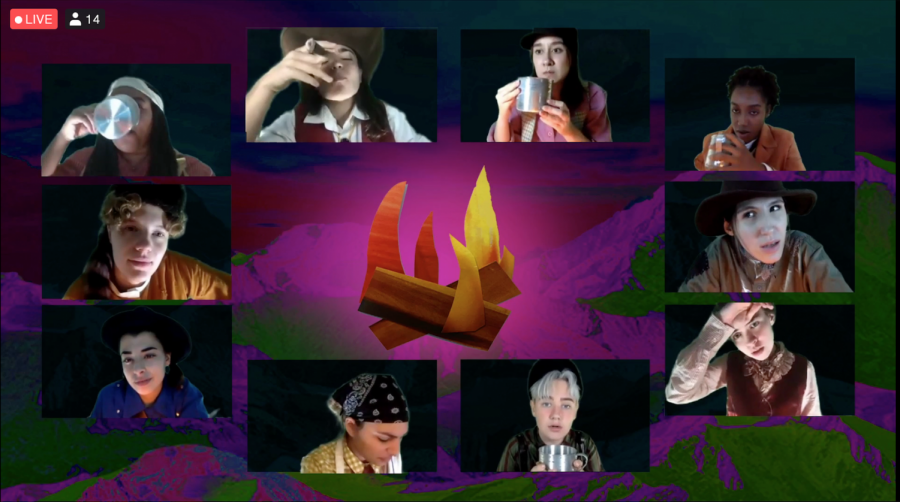 “Men on Boats,” directed by Sarah Wansley, overcame the challenges of an online-based world. The production embraced new technology and focused on topics pertinent to this election year.

It’s nearly impossible to make the telecommunication platform Zoom any more riveting than a biology lecture. But ever since the mass closing of theatres around the world, including Fordham’s very own theater spaces like Kehoe, Pope Auditorium and the White Box, technology experts have been working overtime to breathe life into the mundane video-conferencing software.

The Fordham University theatre department has been making strides to adjust to the new virtual theater scape. With all classes being online and live shows having to switch to the screen, directors like Fordham’s Sarah Wansley have had to come up with creative solutions to complex problems.

The program decided to produce “Men on Boats,” a play that “follows a crew of white male explorers as they chart the Green and Colorado Rivers in 1869,” as described in a Fordham Theatre blog post. There’s one catch about the show, however: There are no men in Fordham’s production of “Men on Boats.”
How would the history of the frontier be different if we pulled our legends from the journals of women, Indigenous people and people of color? Sarah Wansley, director of “Men on Boats”
The show was intentionally written for a predominantly female cast, but even past professional productions have failed to meet this criterion. Some local productions opted to include a few men of color, but director Wansley was only looking for women and nonbinary individuals to play the roles.

“One of the central themes the play explores is leadership — what qualifies you to be a leader,” Wansley said. “As we enter this critical election, I can’t imagine a more relevant topic … How would the history of the frontier be different if we pulled our legends from the journals of women, Indigenous people and people of color?”

In contrasting the male experience with non-male actors, Wansley discovers the treasures playwright Jaclyn Backhaus had hidden in the language all along. “She was talking about how she wanted to address toxic masculinity in this show. I do think that’s a structure in our society that needs to be dismantled and revisited in culture,” Myca Hinton, Fordham College at Lincoln Center (FCLC) ’22 and cast member, said in regard to Wansley’s direction. The show at its core is about who gets to tell what story, and it’s fantastic.

As for the show itself, the complicated technical elements and dedicated, thrilling acting is electrifying. Hinton’s castmates all delivered fantastic and committed performances. Even in the confines of their homes, there were moments where their characters practically jumped through the screen.

With spectacular scenic design and stop motion video work, local scenic designer Sasha Schwartz was also a star of the show. They did a magnificent job at immersing audience members into the story, and it truly wouldn’t be nearly as good of a production without their stunning animations and designs. Although watching the show was an amazing experience, I really started to understand the show from the inside working a small technical aspect during rehearsals.
Experiencing It From the Inside
As a first-year theatre major, I have a requirement to fulfill a certain amount of technical hours during my freshman year. Luckily for me, I was assigned to “Men on Boats.”

When I launched the Discord app on my computer, I was met with a swarm of different chat rooms for the production: one for wardrobe, one for the entire show, one for just actors, one for each individual actor and so on — it seemed to go on forever. Making Zoom theater is a tightly knit process that requires an even tighter community.

The job of doing first-year tech at Fordham usually would entail long hours of hanging lights, helping to design sets or maybe assisting with sound design. In our new frontier, there are no lights to hang or sets to help build — there’s only the magic of the screen and technological software.

So instead, first-years get the chance to check in with actors, make sure they have all their props and costumes and get them mentally ready for their four- to five-hour rehearsal.

I was assigned to Victoria Fanning, FCLC ’22, and every day at 6 p.m., we signed into Discord to debrief about our day. My entire experience on this show has been a delight, but my favorite part by far is the melding of themes within the show itself and with those that we navigate in the present day.

“It’s about these people going on an unknown exposition — no one’s done this before. All they have is each other to lean on, and I think we’re going through something very similar right now,” Fanning said.

She discussed how there were over 200 people in the virtual waiting room opening night and how her family in Arizona was able to watch her show while still being social distanced. I could hear the smile through the screen as she mentioned that her grandparents could now see her shows again. Without the magical accessibility of the internet and Zoom theater, plenty of grandparents and cross-country family members wouldn’t be able to see their relatives’ performances.

Virtual theater is about accessibility. It’s about breaking down barriers and allowing people who may not have access to the artform a chance to experience it at their fingertips. It’s a beautiful thing — just because it’s different from what we’ve always known doesn’t mean we can’t embrace it.
Our Present Reality Doesn’t Have to Be a Limitation
When live performances are back, it’ll be pretty cool to see how Zoom can reach other people. Audience members could watch it from California, it can be interactive not only with people in the audience physically but also people who are distanced. Dylan Montellano, FCLC ’24
Dylan Montellano, FCLC ’24, and local technical theater master John Kolbinski maneuvered an incredibly complex software called OBS, a platform that allows users to mix pre-recorded and live technical elements on Zoom.

“I guess the limits were destroyed. The possibilities were expanded that’s for sure. I didn’t realize we had the possibility to do green screens, Zoom video and live elements all together,” Montellano said on how his knowledge of live theater translated to Zoom. “Men on Boats” is a feat of technological innovation, mixing green screen elements with prerecorded video and audio. With a range of sound and light design and far more technical surprises, the show pulled off something far beyond expectation.

Indeed, virtual theater breaks many barriers. Although Zoom might seem like a limitation, it has allowed for the birth of some truly special moments. Hinton, Montellano and Fanning all talked about the unknown and how it surprisingly brings people together.

“When live performances are back, it’ll be pretty cool to see how Zoom can reach other people. Audience members could watch it from California, it can be interactive not only with people in the audience physically but also people who are distanced,” Montellano said.

We are in a time where we know incredibly little about what the future will hold. But art still serves the same purpose it always has, and “Men on Boats” illuminates that swimmingly.